Aldi sells some jarred Indian sauces along with naan as Regular Buys, as well as some dishes such as samosas as occasional Aldi Finds (Special Buys).

One of the more recent entrees I tried from TJ’s is the Trader Joe’s Shrimp Tikka Masala with Cumin Rice. 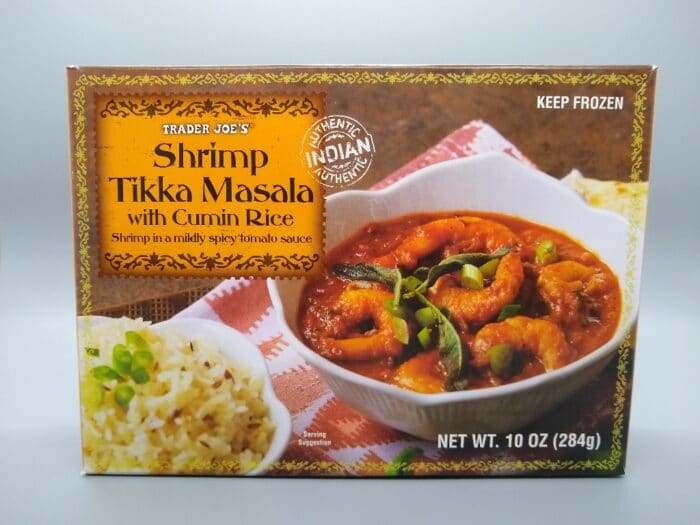 Trader Joe’s Shrimp Tikka Masala with Cumin Rice cost $3.49 for a 10-oz. box at the time of publication.

It’s found in the freezer section, and the box describes it as “shrimp in a mildly spicy tomato sauce.” It’s a product of India.

If you’re avoiding allergens, it contains milk, coconut, and shrimp. It may contain traces of soy and wheat. 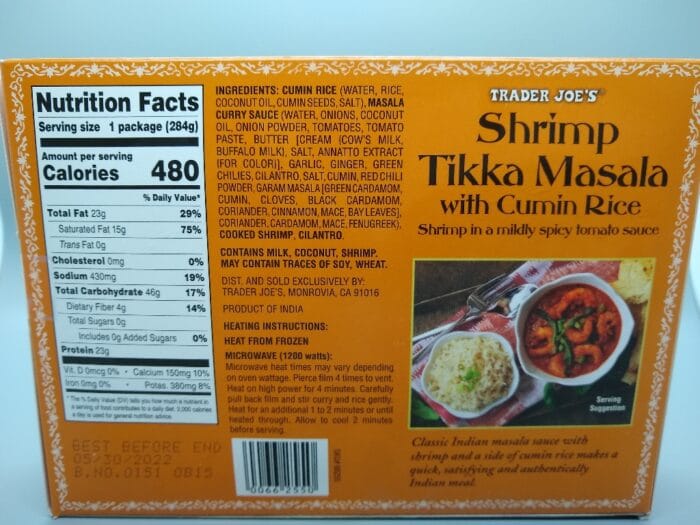 This meal is supposed to be heated from frozen, and it only has microwave directions. To prepare it, remove the food tray from the box and pierce the film four times to vent. Heat on high power for 4 minutes. Carefully pull back the film and stir curry and rice gently. Heat for an additional 1-2 minutes or until heated through. Allow to cool for 2 minutes before serving.

One of the first things I noticed when I heated this entree for lunch is that there aren’t a lot of shrimp. On one side of the microwavable tray were five medium-sized shrimp in a generous amount of sauce, and the other half of the divided tray held the seasoned rice. It’s enough food for one person to eat for lunch, but you aren’t going to be overeating with just this. You might want some side items such as naan, samosas, or a salad, or at least some fruit, to help fill you up. Given that fact that this meal is only $3.49, it’s perhaps not such a big deal that the portion is on the smaller side.

As far as how this meal tastes, it was surprisingly good. Sometimes frozen Indian entrees can be a little on the bland side, but this was well seasoned, with a mild to medium amount of spiciness. It didn’t just taste like spicy tomato sauce either, as some grocery store Indian sauces do. This sauce was complex, with hints of garlic, ginger, cilantro, cumin, cloves, and other spices.

I would consider buying this again as a quick, easy, and tasty lunch.

Trader Joe’s Shrimp Tikka Masala with Cumin Rice is seasoned well, with mild to medium spiciness, and makes for a tasty lunch. My only disappointment is that it doesn’t have a lot of shrimp, but for the price, I can’t complain much.