Ham is one of my family’s favorite holiday meals. A good spiral sliced ham is perfect for eating on its own alongside mashed potatoes, rolls, and other holiday fare. The leftovers (which can conveniently be frozen until you’re ready to use them) are also fantastic served as sandwiches, cheesy casseroles, or as ham and bean soup. It’s why I always try to pick up a ham during the fall or winter months even if it’s not on the menu for Thanksgiving or Christmas days.

Aldi has sold several excellent spiral sliced hams over the years, from regular hams to uncured hams. This year, I decided to try a ham from Aldi’s cousin, Trader Joe’s. 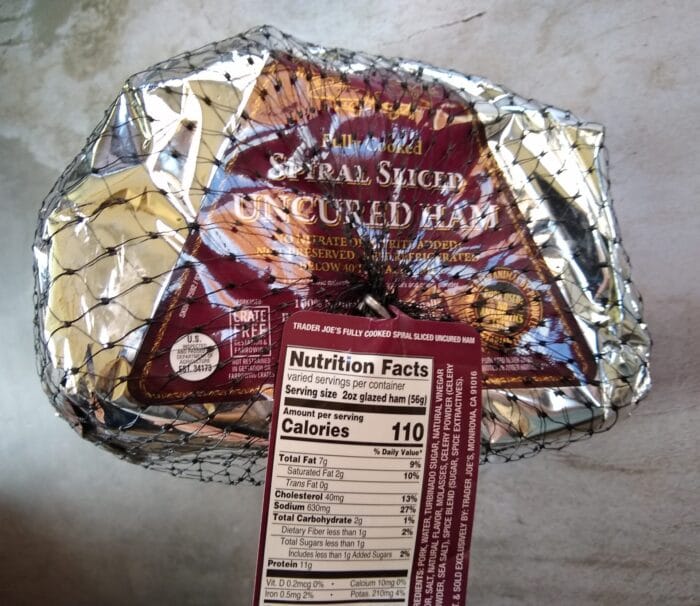 According to Trader Joe’s Fearless Flyer, their hams are 100% antibiotic free and come from pigs that have not been restrained in gestation or farrowing crates. Although pigs are omnivores, these pigs were fed a vegetarian diet.

The ham is spiral sliced, which leaves the meat connected to the bone until, according to the Fearless Flyer, it’s “gently removed with  twist of the fork.”

Because the ham is fully cooked, you only need to warm it in the oven before serving. The TJ’s Fearless Flyer says that to warm the ham, preheat your oven to 275 degrees. Put the ham in a roasting pan and heat for 12-15 minutes per pound. That comes out to a little over an hour for Trader Joe’s quarter hams, which are 4 to 4.5 pounds each, or about two hours for Trader Joe’s half hams, which are 8 to 9 pounds.

My ham also came with more detailed directions inside the packaging. It still states to preheat the oven to 275 degrees. Then, take a deep roasting pan and place the ham face down, and then cover. (I covered my ham with foil.) Heat the ham for 12-15 minutes per pound (to approximately 120 degrees internal temperature), or until the desired temperature is reached. For my 4.1-pound ham, that meant baking it for about 50 to 61 minutes. I set the timer for 50 minute initially.

The ham includes a powdered glaze packet that has cane sugar, spices, and canola oil. To make the glaze, take a small saucepan and combine the glaze packet contents with 1/8 cup of water. Place the saucepan onto a stove top burner set to medium heat. Stir the mixture continuously until the entire spice packet has dissolved into the water. Remove from heat and coo.

To glaze the ham you’ve already warmed, bump the oven temperature up to 450 degrees. Baste the warmed ham with the previously prepared and cooled glaze. Once the glaze has been applied to the whole ham, place it into the preheated oven uncovered. Heat the ham for 7-10 minutes or until the glaze is crystalized. Allow the ham to cool to the desired serving temperature. 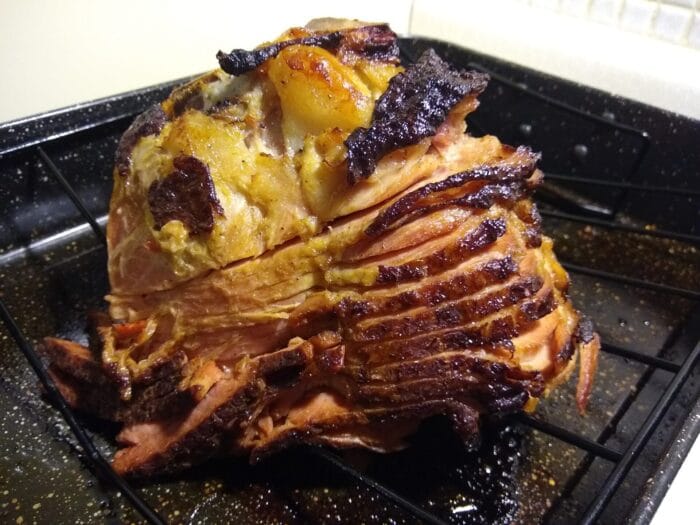 The warmed and glazed ham, ready to eat.

My 4.1-pound ham took about one hour and 10 minutes in the oven to reach about 105 degrees. At that point, the rest of my meal was ready and I didn’t want things to get cold, so I pulled the ham, glazed it, and returned it to the oven for a few minutes to crystalize the glaze.

If I buy a Trader Joe’s ham again (which I very well might because my family and I all loved it), I will probably allow some extra oven time beyond what the directions indicate because my ham wasn’t quite up to the recommended 120 degrees internally. That wasn’t a big deal because the ham is sold already fully cooked, but it just meant the ham wasn’t quite a hot as it could have been. My family didn’t mind it at all.

You’ll want to keep an eye on your ham after you glaze it and stick it back in the oven because the glaze can quickly start to caramelize and drip and burn on the bottom of your roasting pan. The directions say to pop the ham back in the oven for 7-10 minutes to heat the glaze, and I pulled my ham out on the lower end of that range after 7 minutes. 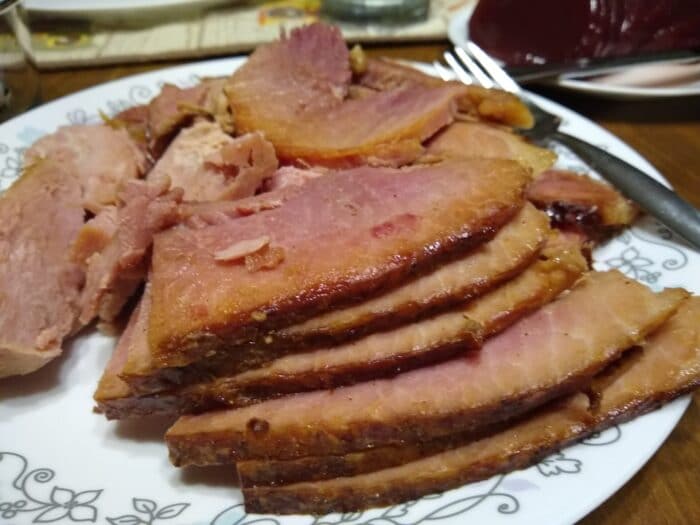 This ham was a big hit in my household. The quarter ham was just the right amount to feed a family of four, with a meaty ham bone left over for making other goodies later. If I were feeding more than four people, I’d go for the larger half ham. The ham was fall-apart tender and flavorful, and the glaze adds a nice sweet touch. I could be wrong, but I felt like I picked less fatty bits off my ham slices while eating this ham. My family was split on whether the Trader Joe’s ham is better than hams we’ve eaten from Aldi. The TJ’s version is at least as good. I think the TJ’s ham was one of the more tender hams I’ve eaten in a while.

Once opened, the ham should be eaten within four days or frozen. Also, don’t forget to save your ham bone to make cheesy broccoli and ham soup or ham and beans. Ham bones are easy to freeze in a gallon-sized Ziploc-style bag so you can use them later.

Trader Joe’s Crate Free Fully Cooked Spiral Sliced Uncured Ham comes in a quarter size (which was perfect for feeding four people) or a half size to feed a larger group. Like most spiral sliced hams, this ham is already fully cooked and simply needs to be heated in the oven. It also comes with a glaze packet. This ham turned out tender and flavorful and is one of the better hams we’ve had in recent memory. Recommended.