Last year Aldi made some waves on social media when it rolled out a tube of cinnamon donut stick dough as a limited-time special. The donuts were not always easy to find in stores, and Aldi fans who managed to score some donut dough shared tips for preparing them. I never spotted the donut sticks in my local stores last year, but when Aldi brought them back again in August of 2021, I was able to get a tube. 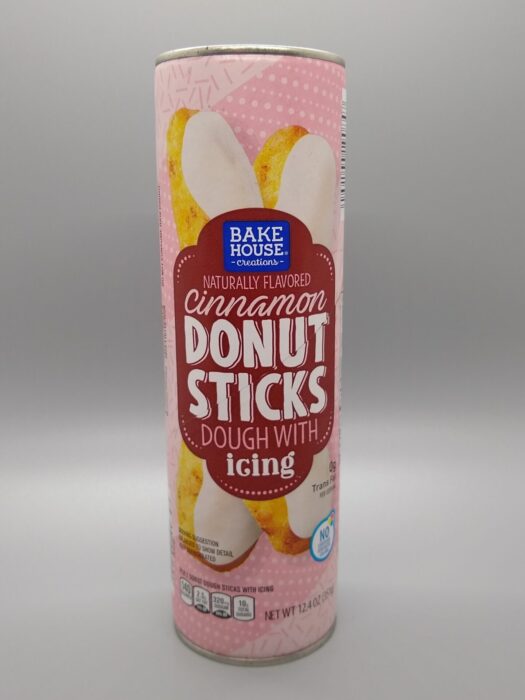 Bake House Creations Cinnamon Donut Sticks Dough with Icing cost $1.49 for a 12.4-ounce tube at the time of publication.

These are an Aldi Find, which means they’re only available for a short time. Also, Aldi won’t ship them to you once they sell out at your local store. 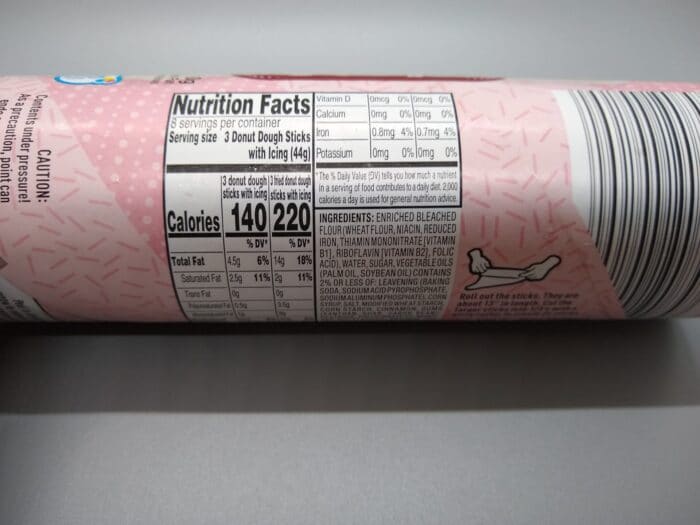 Nutrition info and ingredients, part one. (Click to enlarge.) 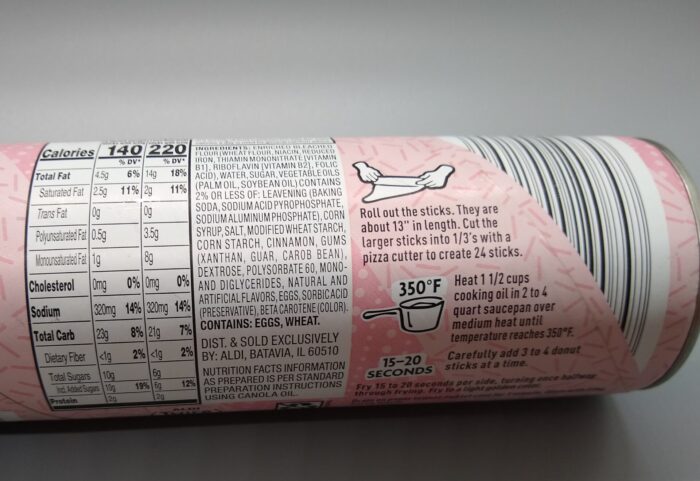 If you’re looking out for allergens, these contain eggs and wheat.

For comparison, a single 44-gram prepared cinnamon roll from the tubes Aldi sells year round has 150 calories, 5 grams of total fat, and 2.5 grams of saturated fat, so there is a clear difference between eating fried donut sticks and baked cinnamon rolls.

That nutritional difference is probably one reason why I’ve read rumors of some people air frying or baking these, or even putting them in a waffle iron, but I decided to follow the instructions printed on the tube and these donut sticks came out perfect in terms of taste and texture.

These donut sticks should not be frozen and should be used by the date on the end of the tube, which was in October for a tube I purchased in August.

To prepare these, take the dough out of the can. It will be rolled up like cinnamon rolls. 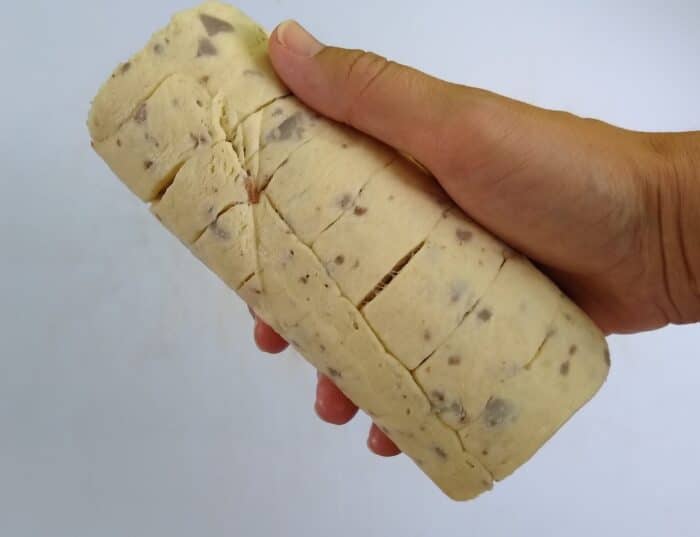 Roll out the sticks. They are about 13 inches in length. 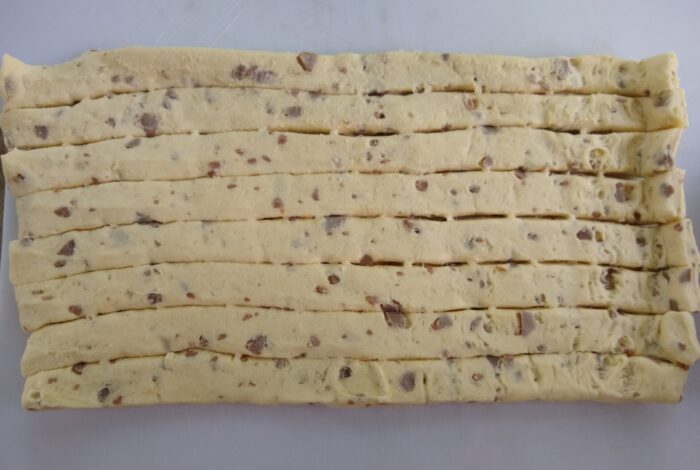 Donut sticks unrolled. I put mine on a large cutting board for this part.

Cut the larger sticks into thirds with a pizza cutter to create 24 sticks. 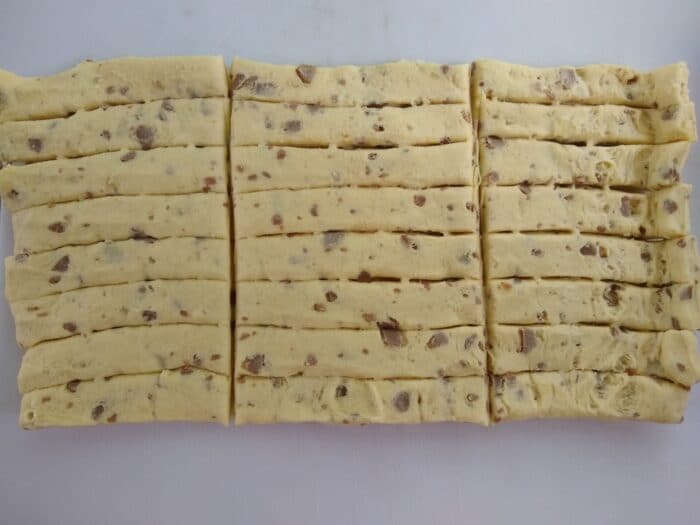 Sticks cut into thirds with a pizza cutter, so I now have 24 sticks.

Heat 1 1/2 cups of cooking oil (I used vegetable oil) in a 2- to 4-quart saucepan over medium heat until temperature reaches 350 degrees. Carefully add three to four donut sticks at a time. Fry 15-20 seconds per side, turning once halfway through frying. Fry to a light golden color. Mine didn’t get dark brown, but when I removed them from the hot oil and carefully touched them, they were crisp on the outside and definitely done. 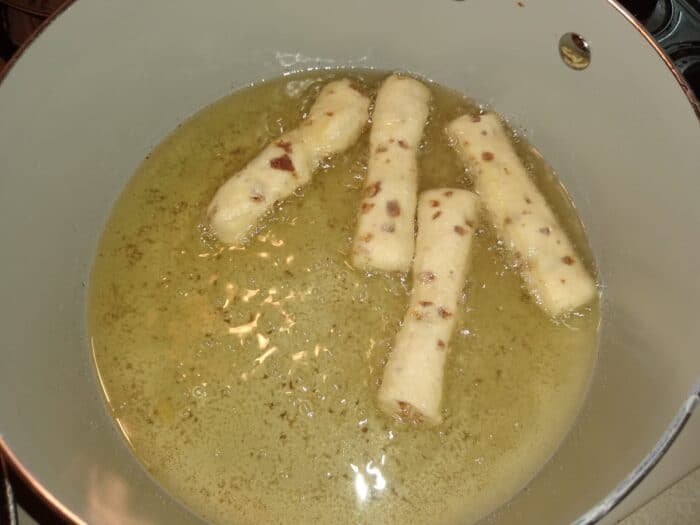 Drain on paper towels and let cool for 1 minute. 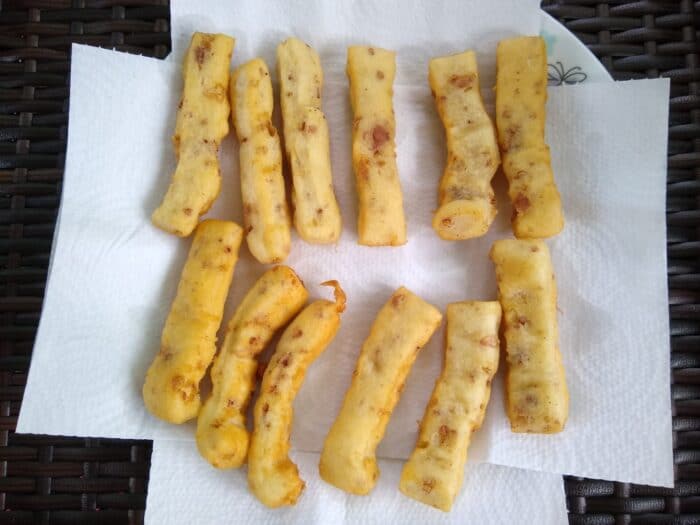 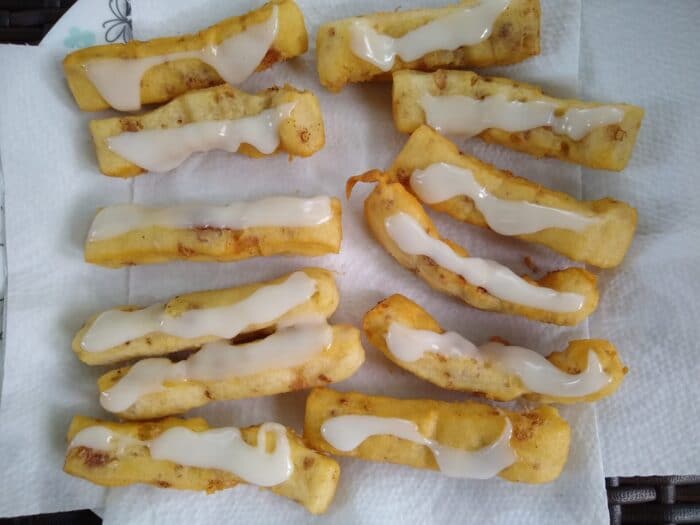 I thought these might be time-consuming, messy, and overall a fuss to make. It wasn’t too bad, though. It’s easy to unroll and cut the sticks. I used a food thermometer to make sure I had the vegetable oil hot enough in my saucepan, and it was simple to add, turn, and remove the donut sticks using a pair of kitchen tongs.

The frying part doesn’t take long, and you will need to pay close attention so you don’t overcook the dough. As soon as I added four donut sticks to the hot oil, I started counting to 20, then flipped them, then counted to 20 again, then removed them. Doing four donut sticks at a time, I went through that process six times. It only takes a few minutes, but just be aware you won’t be able to really chat with anyone else in the kitchen or multitask during this part.

When you’re done, you’ll want to dump your cooled used cooking oil into a can, jar, or plastic container and dispose of it in the trash rather than pouring it down the sink, where it can cause plumbing issues.

As for what my family and I thought of these donut sticks when we enjoyed them as part of a weekend brunch, they’re not all that different from cinnamon rolls in terms of both taste and texture. We liked them a lot, but none of us were sure that they’re good enough to compensate for the added fat that comes from frying these versus baking traditional cinnamon rolls. They also take some more work to prepare compared to dropping some canned cinnamon rolls in a pan and baking them. For those reasons, I probably won’t buy these again, but they were fun to try.

Bake House Creations Cinnamon Donut Sticks Dough with Icing are sold in a tube that looks like what you’d get cinnamon rolls in. When you pop open the tube, they even look just like cinnamon rolls. You’ll unroll the dough, cut it into smaller sticks, fry those sticks in hot oil on your stovetop, and then top them with icing. In the end, these taste like cinnamon rolls but with more calories and fat because they’ve been fried. They’re interesting to try, but we’ll probably stick with regular cinnamon rolls that take less work and are not quite as bad for you.