In my house, weekends are the time for hot cooked breakfasts or brunch. On these mornings when we have more time and aren’t constrained by school or work schedules, we enjoy making omelets, egg sandwiches with cheese and bacon or sausage, pancakes, hash browns, waffles, casseroles, and more. Cinnamon rolls make a frequent appearance on our table on the weekends, and like most of our breakfast food, we buy them at Aldi. 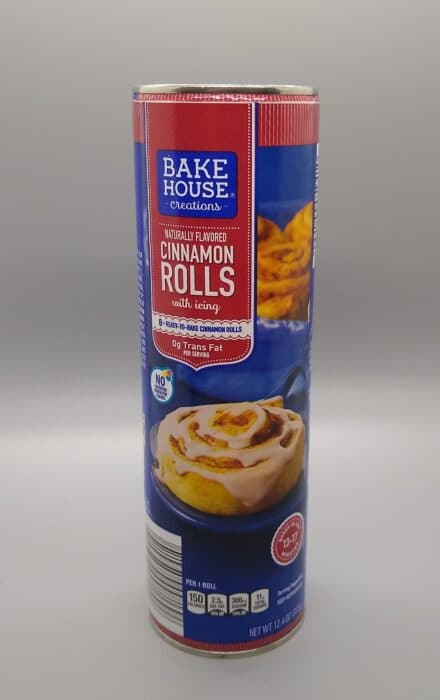 Bake House Creations Cinnamon Rolls cost $1.19 for a 12.4-oz. tube at the time of publication. With eight rolls in a tube, that comes out to about 15 cents per roll.

The Aldi cinnamon rolls are a Regular Buy, which means Aldi sells them year round.

These rolls should be kept refrigerated before preparation, and the tube says not to freeze them. They have a best-by date on the bottom of the can, and they are good for quite a while. The most recent tube I purchased in late November is good until late January.

Preparation is easy. Preheat your oven to 400 degrees Fahrenheit. Open the tube and separate the rolls. Place them with sides touching in a greased 8-inch or 9-inch round cake pan. Bake for 13-17 minutes or until golden brown. Remove from the oven, and cut the tip of the icing packet with scissors and drizzle icing over the hot rolls. Do not heat the icing packet in the microwave.

In terms of ingredients and nutrition information, these are pretty similar to name-brand Pillsbury original cinnamon rolls. 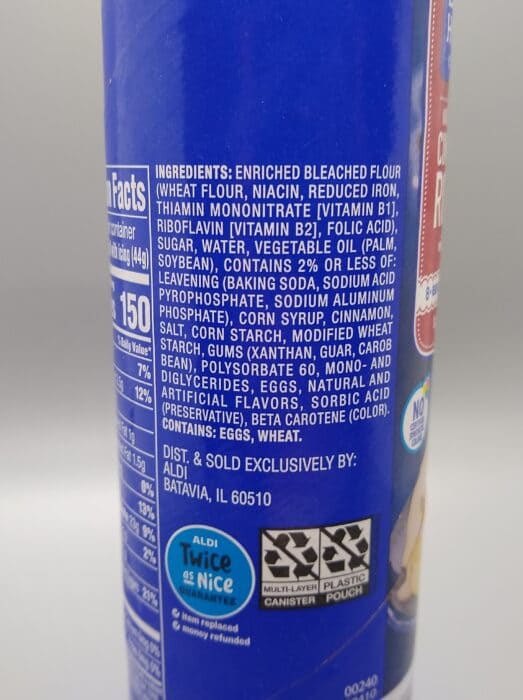 If you’re watching out for allergens, these contain eggs and wheat. 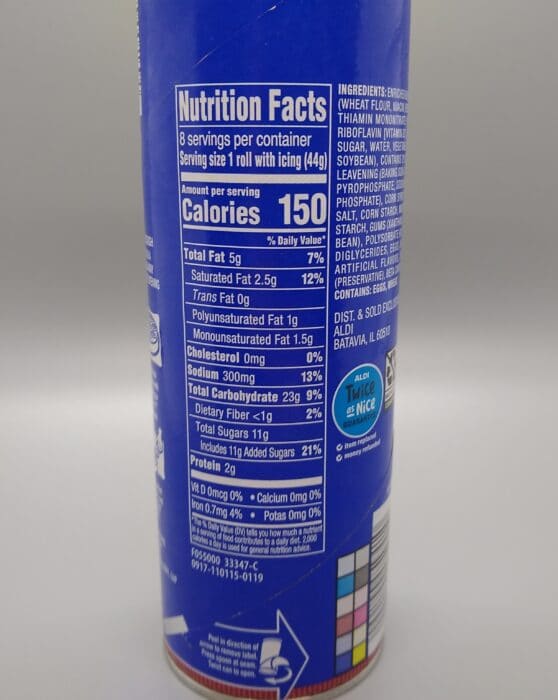 We make these cinnamon rolls every few weeks in our house. They’re your classic traditional cinnamon rolls from a can. They’re of average size, not jumbo-sized like some of the varieties you can get from larger grocery stores, so if you want giant rolls you’ll have to buy a brand like Pillsbury Grands or make your own. They have lots of cinnamon flavor, soft doughy interiors and slightly crispy exteriors, and plenty of gooey icing that my kids like to scrape out of the cake pan after the rolls are gone.

Bake House Creations Cinnamon Rolls bake up with good cinnamon flavor and tender doughy centers. We won’t turn down a Pillsbury roll — or any kind of cinnamon roll, for that matter — but these are good in their own right.