In 2017, we had the misfortune of testing the Bauhn Accessories Radio Alarm Clock, one of the most annoying alarm clocks we’ve ever used. The interface was an alarm clock version of a Rube Goldberg device, as if someone thought it would be hilarious to equip an alarm clock with a whole bunch of buttons and then make it unclear which buttons you need to turn off the alarm in the middle of the night.

Well, Aldi has decided to take another swing at the alarm clock business, this time with fewer buttons. 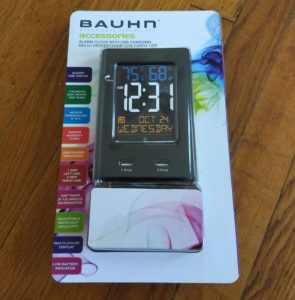 The Bauhn Alarm Clock With USB Charging is an ALDI Find (Special Buy), so it’s only in stores for a limited time. At the time, it’s $16.99 and comes with the alarm clock, an AC adapter, and a manual. (The clock does have the ability to draw backup power from two AAA batteries, but, as seems to be the case with Aldi alarm clocks, Aldi was too cheap to include any.) The clock is backed by a 2-year warranty, serviced by Protel, which Aldi uses for a variety of its electronics.

Here are the clock’s official features: 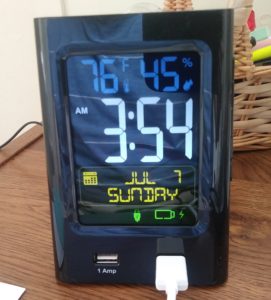 The multi-color display on the clock looks cool enough, and it is reminiscent of a certain Aldi weather station from years past. It shows time, date, day, indoor temperature, and indoor humidity. Depending on the circumstances, it might also show that a device is charging, an alarm is set, or that a nap is underway.

The clock is also lightweight and compact, so it should fit on all but the smallest tables without too much trouble.

There are six buttons on the clock. At the top is a button that both snoozes the alarm and changes the backlight, while on the right are buttons for the alarm, nap, and settings features, as well as plus / minus buttons to adjust values like the clock time or alarm time. Holding down the alarm, nap, and set all open up menus that let you change settings. (Be careful not to hit the top button during that time, though, as it automatically exits out of the menu.)

There are several nifty features on the clock worth noting. One, while there is just one alarm, it can be set to either every day, weekdays only, or weekends only, and turning off the alarm only requires hitting one of the side buttons, unless you want to snooze with the top button. My only gripe here is that if you’re someone who likes to disable the alarm before it goes off, you have to fumble in the dark a little to find the alarm button, and then hit it a few times.

Two, the nap function (which is adjustable) lets you start a nap with just a single touch of a button, helpfully showing a countdown timer on the main display. You can disable the nap with another single touch of the button, and you can adjust the nap length in the settings menu.

Three, the backlight has three brightness modes: high, low, and off. (If you’re running only on battery power, it stays dark unless you tap the top button.) If you want to see the display all the time but like a pretty dark room, this clock may not be for you: even the low bright setting is brighter than most other alarm clocks, thanks to the larger display. On the other hand, if you can handle a little light, the low or high settings can work.

Four, the clock has a beeping noise every time you hit a button, but if you want to turn that off — and you probably will — you do so through the settings menu.

A fifth feature worth noting is that there are USB ports in the front, which can be used to charge devices. (The clock does not come with any USB cables.) The display changes when a device is plugged in and changes — eventually — once a device is fully charged. One port is listed as 1 amp and the other as 2 amps, although in practice both of them operated the same for me: my phone did not fast charge using the 2 amp even though I used the factory USB cable.

One last note: there is no radio on this clock. This is may or may not matter for you, but it’s important to know that it isn’t there.

The Bauhn Alarm Clock With USB Charging is a decent alarm clock. The display is colorful and helpful, the clock is easy to use, and the features like a nap button and an alarm that can be set for just weekends or weekdays are nice. On the other hand, it lacks a radio, it has only one alarm, and the 2 amp charger didn’t charge our devices any faster than the 1 amp. It also has a few other small drawbacks that I’ve mentioned above. Still, for $17 it has enough features to warrant a look, and a 2-year warranty adds some peace of mind.