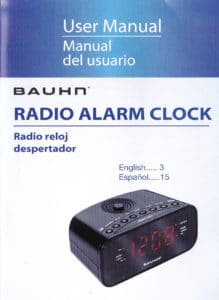 Bauhn is an Aldi-owned electronics company out of Australia. Aldi draws from the company for much of its consumer tech, including headphones and other small devices. 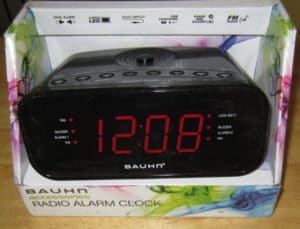 The Bauhn Accessories Radio Alarm Clock, which retailed for $12.99 when we bought it, comes in either black or white. The package includes the alarm clock itself, an AC adapter, and a manual.

The alarm clock comes with a robust suite of features, especially for the price. They include:

There are a lot of buttons and some of the settings aren’t entirely intuitive, so we recommend giving the manual a good look before launching into settings.

The dual alarms are a neat feature, and are easy enough to set … but there’s also a menu that appears after we set the alarm time that cycles between “1-7”, “1-5”, and “6-7”. We had no idea what this meant, because the manual says nothing about it, but after researching other alarm clocks with this feature we discovered that this can be used to set your alarm to every day (1-7), Monday-Friday (1-5), or Saturday-Sunday (6-7). So not only can the Bauhn give you an alarm, but it can also do it for just the weekdays, or just the weekends, if you want.

The USB port is also useful, but 1 amp may or may not be a fast charge depending on your device. The battery backup is useful as well … but you’ll need your own AAA batteries, since Bauhn apparently was too cheap to include them. 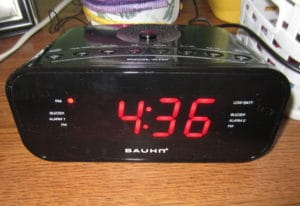 The Bauhn alarm clock on a kid’s dresser.

One other note: the alarm clock does not come with a warranty. It’s not the biggest deal, but we do appreciate the peace of mind Aldi often brings to its electronics with a warranty, and it’s unfortunate this doesn’t have one.

On the whole, we like the clock and the features it has, but this is also one of the more complicated clocks we’ve ever seen. The buttons are not always intuitive and more than once we’ve had to stop and think about what to do to accomplish even simple tasks.

An unpleasant example of this happened one night when the alarm went off unexpectedly around midnight in one of our bedrooms. (We’re not sure why — we suspect a kid pressed a button.) Turning off an alarm is usually a very straightforward process with a clock, but in the dead of night we had a hard time figuring out what to do with the Bauhn to do more than just delay it with the snooze bar. After several minutes, we finally just unplugged the thing so we could go back to sleep.

After looking at the manual the next morning, it turned out that the fix was simple — just push the alarm button until it cycles off — but it was still frustrating not knowing what to do when we were staring at lost sleep because we didn’t know which of the eight non-snooze buttons to press or hold. Clocks should be simple and easy to use, and, judging by both our experience and the comments and e-mails we’ve gotten, this one is not.

As garden variety alarm clocks go, the Bauhn Accessories Radio Alarm Clock has some nifty bells and whistles, from the auxiliary port and USB charging port to the dual alarms that can be set for weekdays or weekends. We just wish it was easier to navigate and that it came with a better speaker. We also wish it had come with a warranty. This clock was so complicated to use that after a year we got rid of it and replaced it with a clock from a thrift store.