German week usually comes around about twice a year at Aldi, often in the spring and fall. Each time, I try to pick up a few new German or German-inspired foods I haven’t tried yet. I’ve slowly been working my way through all of the offerings, including schnitzel, cream cakes, whole grain mustard, potato dishes, Jaffa cakes, sweet mustard, and pickles.

There are usually a few different types of strudel — both savory and sweet — in the freezer aisle during German week. Most recently, I bought some of the savory strudel options to try. 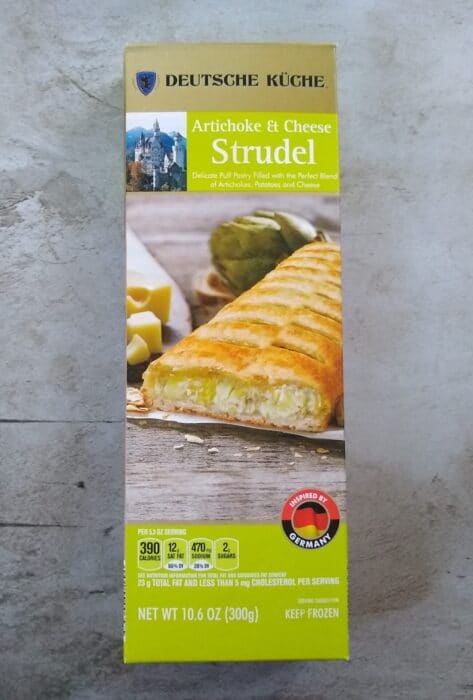 Deutsche Küche Artichoke & Cheese Strudel cost $3.99 for 10.6 oz. at the time of publication. It was sold alongside another savory strudel flavor, spinach and ricotta.

All of the strudels are Aldi Finds, which means they’re only in stores for a short time. (And no, Aldi won’t ship them to you once they’re sold out at your local store.)

This artichoke and cheese strudel is described on the package as “delicate puff pastry filled with the perfect blend of artichokes, potatoes and cheese.” It’s a product of Italy that is “inspired by Germany.”

If you’re watching out for allergens, this contains wheat and milk. It may contain egg and soy. 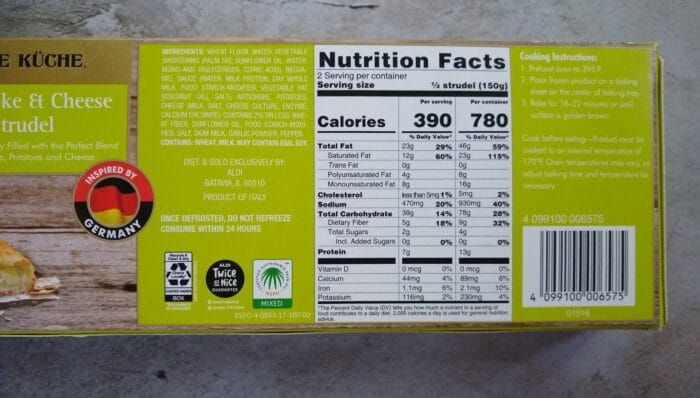 The package has instructions for baking in a conventional oven. Preheat the oven to 395 degrees Fahrenheit. Place the frozen product on a baking sheet on the center of the baking tray. Bake for 18-22 minutes or until the surface is golden brown and internal temperature reaches 170 degrees. 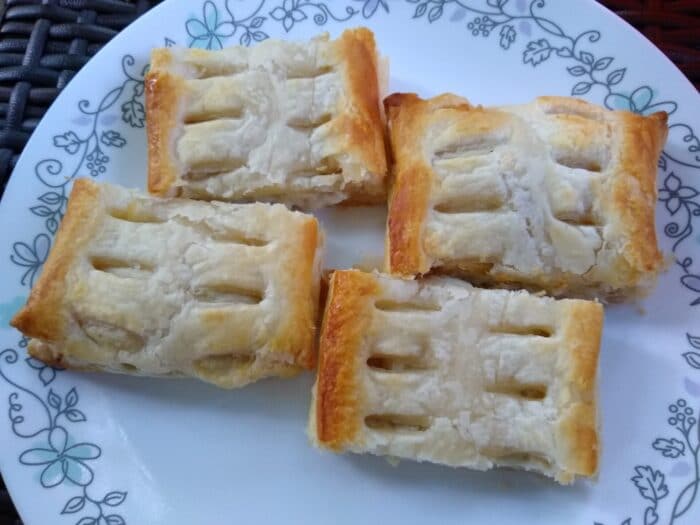 Baked, sliced, and ready to eat.

This strudel puffs up slightly in the oven and turns golden on the edges when it’s done. It was easy to slice it up and serve it alongside a dinner of schnitzel and garlic sage spaetzle, which were also limited-time specials I picked up at Aldi. This strudel’s flaky layers of pastry were delicious. The filling is mild-flavored, with almost a ricotta cheese-like texture that is very soft, with small chunks of artichoke scattered throughout. Some family members liked this, and others thought it wasn’t flavorful enough. Whether you’ll like it perhaps depends on how much of a savory strudel fan you are.

Deutsche Küche Artichoke & Cheese Strudel features light and flaky pastry with a soft cheesy filling interspersed with small bites of artichoke. If you enjoying sampling the German cuisine Aldi sells a few times a year, this might be worth a try.