People have all kinds of reasons for going dairy free. It might be because they are lactose intolerant, or because they are pursuing a more vegan lifestyle. Regardless of the reasons, almond milk has emerged as a popular alternative to traditional cow’s milk.

So there’s no surprise that, with all the talk of going fully dairy free, Aldi has come out with an almond milk creamer. 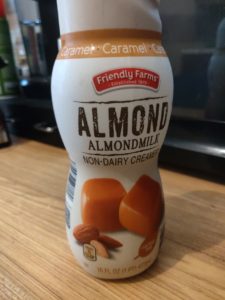 Friendly Farms Almond Milk Creamer is a Regular Buy, meaning it is available in stores all the time. (It’s also achieved some international recognition, as it was a finalist in the 2019 World Dairy Innovation Awards.) It comes in two flavors, caramel and vanilla. The options are a bit more limited for dairy free than for Aldi’s regular dairy creamers, but these are two popular flavors.

This review covers the caramel flavor.

The nutrition facts between Aldi’s non-dairy and almond milk creamer are quite similar, with each coming in at 35 calories and 5-6 grams of sugar per tablespoon. 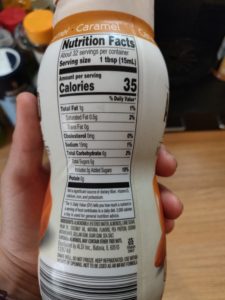 After brewing coffee for my boyfriend and myself, we thoroughly enjoyed the caramel creamer. We couldn’t notice a taste difference between this dairy-free creamer and a dairy one. For me personally, it was a little too sweet, but that may be because of the caramel. Keep in mind that I usually add a splash of whole milk to my morning coffee, and no sugar. My boyfriend thought it was delicious and said he would gladly finish the rest.

The one thing we did agree on is that it does taste like regular caramel creamer (especially like the ones from Dunkin Donuts Caramel Lattes). So if you have a sweet tooth and want to decrease your dairy intake, this affordable delight is the one for you.

If you are lactose intolerant or trying to cut dairy out of your diet, I would highly recommend this Friendly Farms Almond Milk Creamer. It not only tastes exactly like brand name almond milk creamer, but we think it tastes like dairy creamer, too. Pick it up on your next haul!