There’s no doubt that Aldi shoppers get pretty excited when the grocer brings new and unusual things to its stores, be it through the Regular Buys, Seasonal Favorites, or ALDI Finds. The non-food items are definitely a big draw — it’s hard not to be intrigued by an Aldi Lawn Mower — but Aldi is not above catching our eye with its food items, too. (We miss you, Belmont Strawberry Piñata Cake.)

So when Aldi announced that it was selling a mini pizza ring … well, we had to try it. 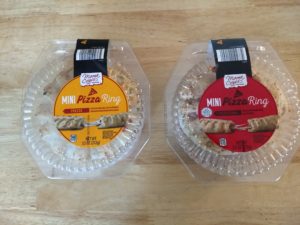 Mama Cozzi’s Mini Pizza Ring is an ALDI Find (Special Buy), which means that once it’s gone, you won’t see it again until it returns to the store, which could take a while. The pizza rings run $1.99 each and are kept in the ALDI Finds freezer. Each of them comes in a clamshell package and is approximately 7.5 ounces. It can be stored in the refrigerator or freezer, although you’ll want to eat it sooner rather than later if you’ve got it in the refrigerator.

At the time of this post, they came in two varieties: cheese and pepperoni. We tried both.

The cooking instructions on the back are exceptionally tiny, so, while we usually list the cooking instructions here, I’m especially mindful of putting them in this post for those who are hard of sight. The pizza rings can be cooked from refrigerated or frozen, with different times for each. The rings can be microwaved or baked. In all cases, the instructions state that the internal temperature after cooking should be at least 168 degrees. (No, that’s not a typo. We even used a magnifying glass to double check that we read it correctly.)

To microwave, you first remove the pizza ring from the packaging, then place it on a microwave-safe dish. If it’s refrigerated, you cook it for 1 minute, while if it’s frozen, you cook it for 1 1/2 minutes. In each case, you let it stand 2 minutes before cutting.

To bake, you preheat the oven to 425 degrees. Then you place the ring (or rings) on the baking sheet and put it into the oven. If it’s refrigerated, you bake it for 15 minutes, while if it’s frozen you cook it for 22 minutes. Either way, after removing it, you let it sit 1 minute before serving. In addition, for best results, the instructions advise brushing the ring with olive oil after baking. 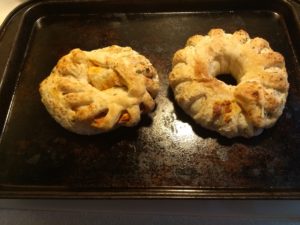 We baked the rings, cooked them from frozen for 22 minutes, and then brushed them with Carlini Olive Oil before cutting and serving. We think this is probably the best method if time allows. 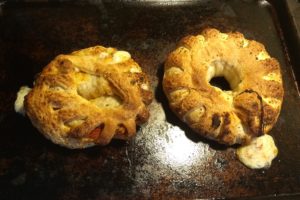 After baking. Both of them lost a little cheese. (Click to enlarge.)

Both of the rings were good. They were both a little bit on the doughy side — as in, we wished there was less dough and more filling — but the crust was crisp, flaky, and flavorful, and the interior was good, too, both in the pepperoni version and the cheese version. The pepperoni was our unanimous pick as the favorite, even by people who don’t regard pepperoni as a favorite; it just gives the ring a better depth of flavor, in our view.

Are these bad for you? You bet. The rings are both high in fat, incredibly high in sodium, and fairly high in cholesterol. The pepperoni is significantly worse than the cheese ring in all of these categories. They’re also both loaded with carbs. And, of course, because they’re processed, the ingredients lists are a mile long. (If you want the culprit for those tiny cooking instructions, look no further.) 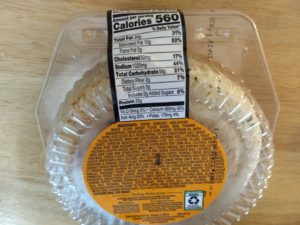 Nutrition and ingredients: the cheese ring. (Click to enlarge.) 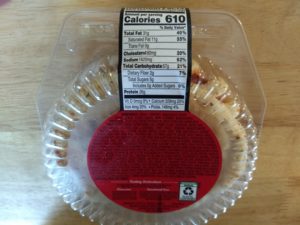 Nutrition and ingredients: the pepperoni ring. (Click to enlarge.)

Mama Cozzi’s Mini Pizza Ring is a pretty novel ALDI Find, and it generally delivers as an interesting, flavorful, crisp experience. Between the flaky crust and the tasty (if a bit undersold) filling, this makes for a decent appetizer or even a meal. As a processed food, it’s very high in all the things that are bad for you, so it’s just as well that it’s an ALDI Find rather than an everyday buy.