For several years now, cauliflower is no longer just another item on a veggie-and-dip tray. It’s increasingly incorporated into baked and processed foods in an attempt to lower the carbohydrates or to offer gluten-free options of popular dishes.

Aldi sells cauliflower products at different times of the year that include knockoff Totino’s Pizza Rolls as well as veggie-based stuffing for your holiday bird, and even cheese crackers. One of the most common foods we see the versatile white vegetable appearing in is pizza. More specifically, pizza crust. Aldi has sold a couple of different cauliflower crust pizzas in the past, but the one most recently in stores features a pepperoni topping. 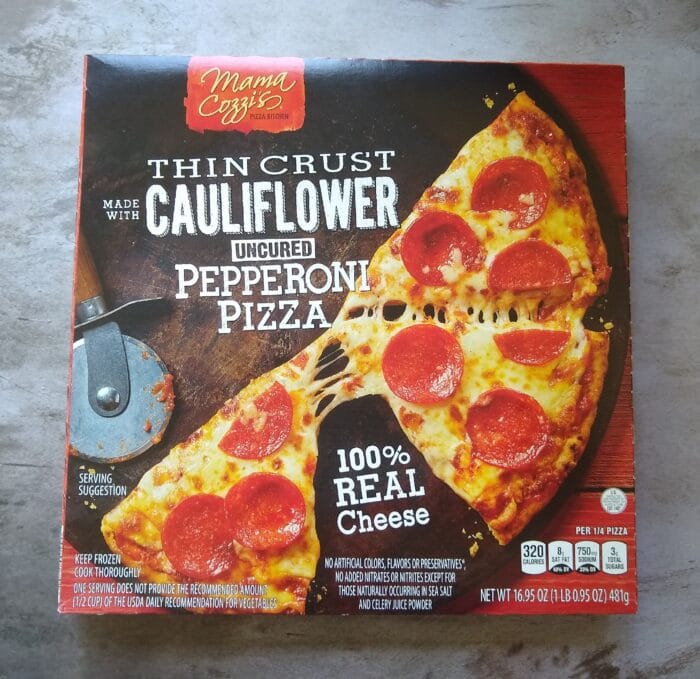 This is sold frozen and is an Aldi Find, which means it’s only in stores for a short time. Aldi does not offer online ordering for its specials after they’ve sold out at your local store, so if you want this don’t delay.

The crust ingredients include cauliflower, water, wheat flour, wheat starch, bread crumbs, and wheat gluten. You can view a full list of the ingredients in the photo below.

If you’re avoiding allergens, this contains milk, soy, and wheat. 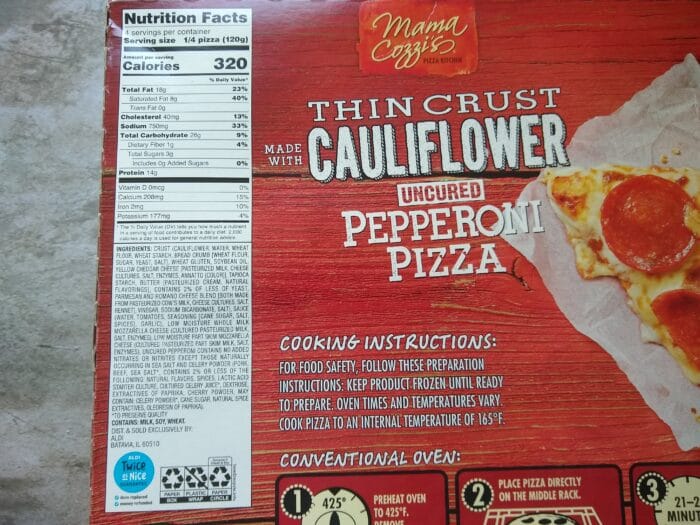 With 26 grams of carbs per serving (with two slices making up one serving, assuming you cut this pizza into eight slices), this is not a low-carb pizza, but it does appear to have fewer carbs than many traditional pizzas, so whether this is acceptable or works for you will depend on your diet preferences. Carbs in pizzas with traditional crusts can start at 20-25 grams per slice and go up significantly from there (especially if you’re talking about restaurant or fast food pizza versus frozen grocery store pizza or even homemade pizza).

To heat this Aldi pizza, preheat your oven to 425 degrees Fahrenheit. Remove the film and packaging from the pizza. Place the pizza directly on the middle rack (I placed mine on a special pizza pan with holes). Bake for 21-24 minutes or until the cheese in the center is melted and the crust is golden brown. 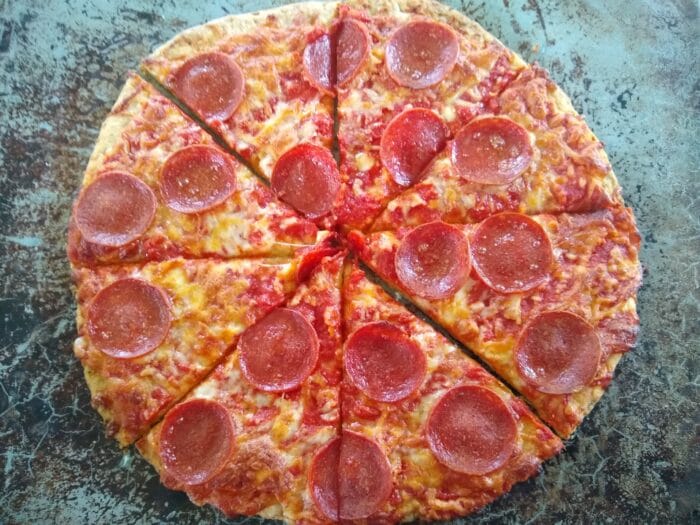 The pizza, sliced and ready to serve.

This was done in my oven after about 18 minutes, so keep an eye on it and be aware you may want to pull it sooner than the instructions indicate.

This tasted pretty much like a traditional frozen pepperoni pizza. It has a decent amount of cheese, and the pepperoni crisps nicely on the edges. The crust really doesn’t have noticeable cauliflower flavor. It’s not a huge pizza, but it’s enough to make a good lunch for a couple of people. I’d buy this again.

Mama Cozzi’s Thin Crust Cauliflower Uncured Pepperoni Pizza is made with cauliflower in the crust, but it doesn’t have any noticeable cauliflower flavor. It’s a lot like any other frozen thin crust pepperoni pizza you’d get at a grocery store. This is not necessarily a low-carb food, but it tastes good, and if you’re interested in trying cauliflower crust pizza, this is a good one.