In 1947, shortly after World War II, Nabisco introduced Wheat Thins. These baked wheat crackers were marketed either as a standalone snack or for serving alongside other things such as cheese, meats, or even fruit. Since then, Nabisco has introduced several different variations on the cracker, from BBQ to Dill Pickle flavors, but the original still remains the most iconic.

As it’s done with many other snack foods, Aldi has a Wheat Thins imitation. 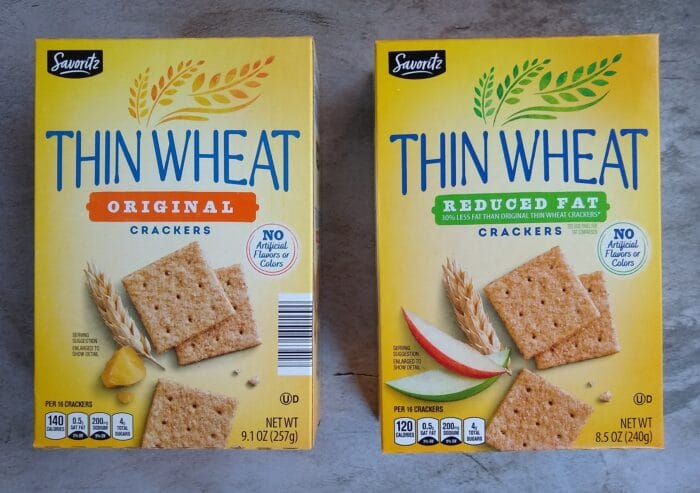 Savoritz Thin Wheat Crackers are a Regular Buy, meaning you can get them in stores all the time. They come in a yellow box that looks suspiciously like Wheat Thins, to say nothing of the name. Aldi sells both an Original and a Reduced Fat version. At the time of this post, the crackers were $1.09 per box.

The crackers come in a box with a tab for closing, with a plastic bag on the inside. The plastic bag isn’t too hard to open.

In terms of taste and texture, I think these are just about identical to Wheat Thins. I grew up on the brand name version and I’d be hard-pressed to taste a difference between them and the Aldi kind. That’s also true of the nutrition information: the Aldi Thin Wheat Crackers are just about the same in terms of calories, carbs, fat, and sodium. 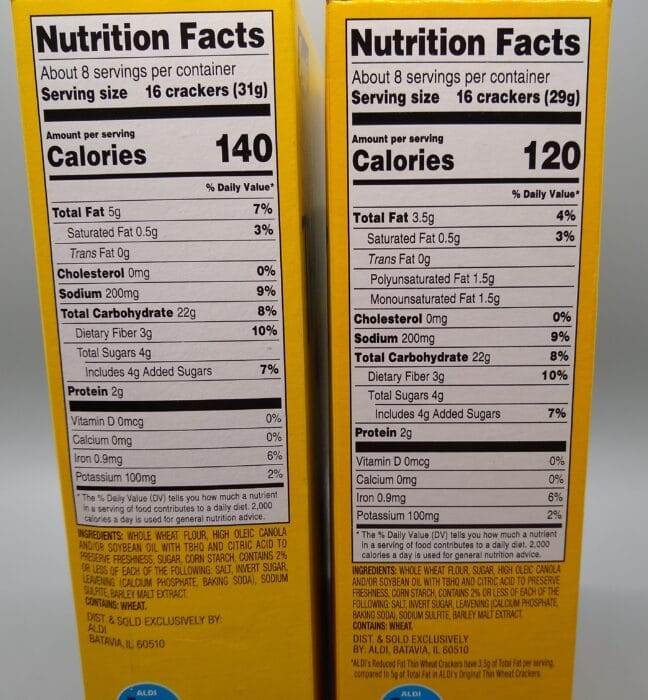 Nutrition and information for the regular (left) and reduced fat (right). (Click to enlarge.)

I gave my wife a blind taste test of the Original and Reduced Fat crackers, and she said the Reduced Fat had a slight aftertaste and a slightly less complex flavor. I tend to agree. The differences are small — you may not notice unless you’re really looking for it — but the Original is the superior cracker. Given the fillers reduced fat crackers have, I’m not sure if they’re worth the tradeoff anyway.

Savoritz Thin Wheat Crackers are a good Wheat Thins clone. I don’t know that I can taste the difference between the name brand and the Aldi brand, and I suspect the people you serve them to won’t notice either.