One thing I’ve learned while shopping at Aldi in recent years is that when the discount grocery store sells specialty ice cream cones, they are always worth buying. Whether it’s strawberries and cream rose cones or galactic cones or unicorn cones, these are treats that are good any time of year. Most recently, I picked up some snowflake-themed cones from Aldi. 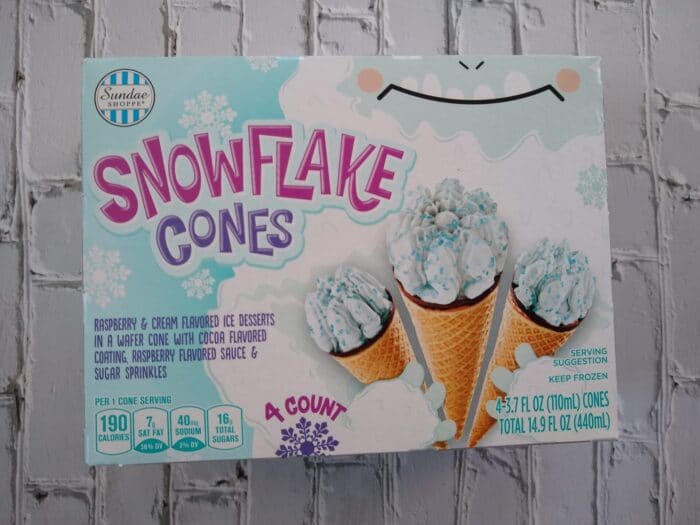 Sundae Shoppe Snowflake Cones cost $3.49 at the time of publication for a 14.9-ounce box containing four cones, which comes out to about 87 cents per cone. The package describes these as “raspberry and cream flavored ice desserts in a wafer cone with cocoa flavored coating, raspberry flavored sauce and sugar sprinkles.

These are an Aldi Find, which means they’re only in stores for a short time. Aldi does not offer online ordering after a special sells out at your local store.

Like unicorn cones, galactic cones, and rose cones that Aldi has sold at other times over the years, these snowflake cones were made in Slovenia by Leone. Leone — a subsidiary of Incom — is an ice cream company whose products are sold at various retailers primarily in Europe, including Aldi, Lidl, and Tesco. Leone also makes the popular reindeer, snowman, and Christmas tree ice cream pops that were recently in Aldi stores. 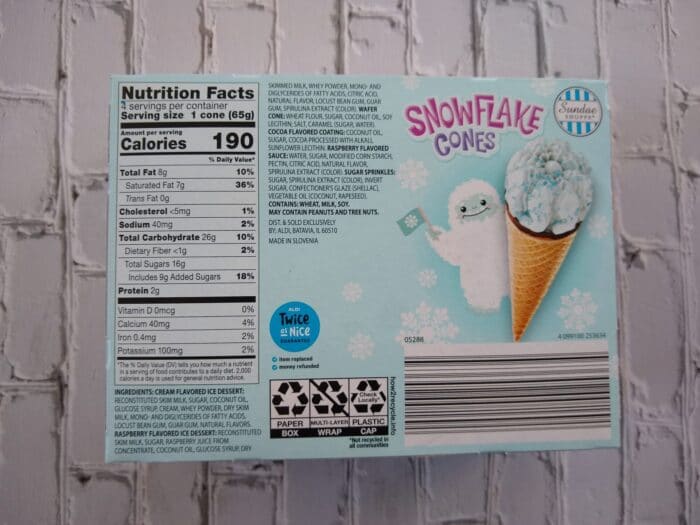 These snowflake cones are not proper ice cream. Notice they are called “ice desserts” rather than ice cream. That probably has to do with them either not having enough milkfat (ice cream must contain at least 10% milkfat) or having a lot of air whipped into the dessert, which gives it a light texture.

If you’re looking out for allergens, these contain wheat, milk, and soy. They may contain peanuts and tree nuts. 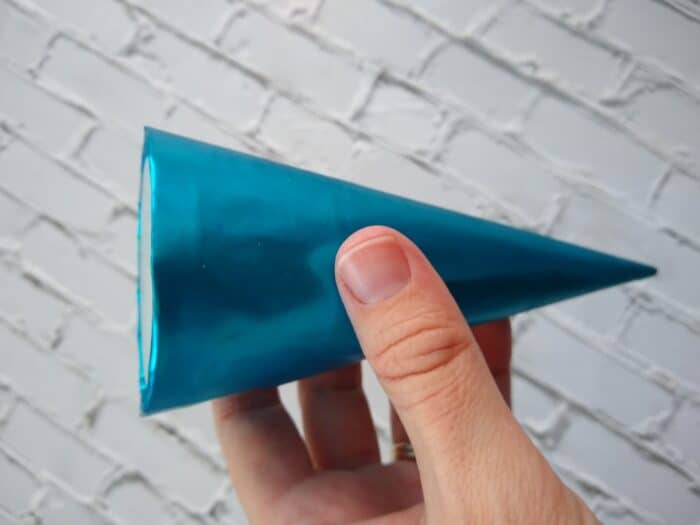 Similar to other Leone-made cones Aldi has sold, these snowflake cones have specialized individual wrapping to help them preserve their unique shape. Each cone has a shiny paper wrapper, and each cone is topped with a small plastic cap to help the ice cream keep its snowflake shape. Young children may need some help peeling off the wrapper. 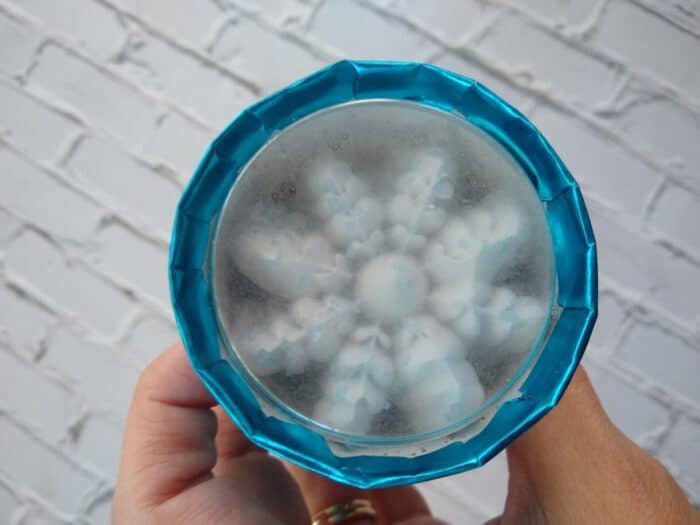 A sneak peek at the treat that’s in store once you remove the wrapping and plastic cover. The ice cream really does look like a snowflake.

These specialty cones from Aldi are always gorgeous, and the snowflake cones are no different. Inside the wrapper is an artfully crafted ice cream cone with a top that looks just like a real snowflake. It’s almost too pretty to eat. 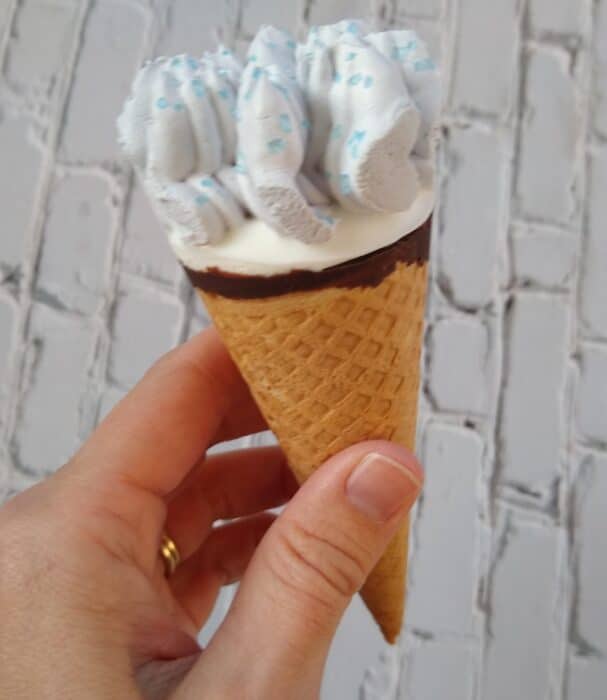 It tastes as good as it looks, too, with a raspberry-flavored blue-tinged portion on top and a vanilla-flavored white portion inside the cone. 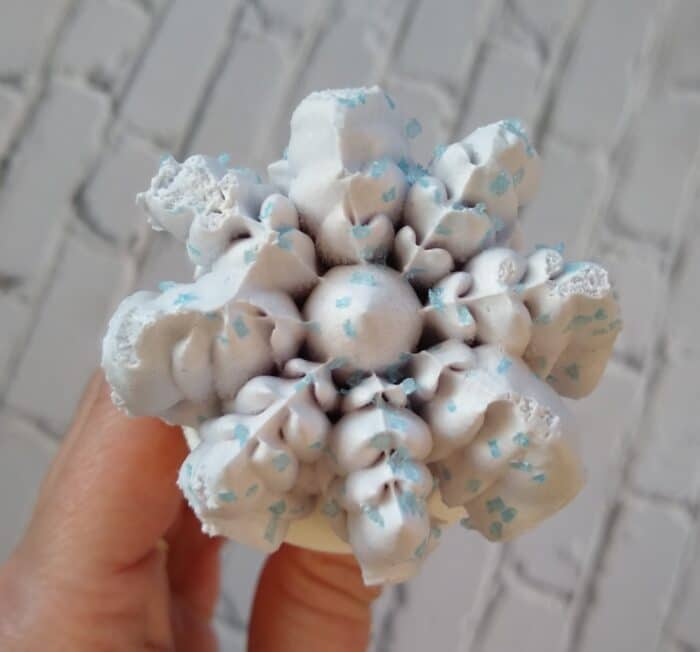 These cones disappeared quickly in my house, as they always do. I’ve learned over time that any products produced by Leone for Aldi are bound to be good. These snowflake cones live up to my expectations.

Sundae Shoppe Snowflake Cones feature raspberry and vanilla frozen dessert in a sugar cone lined with chocolate and filled with raspberry sauce and sugar sprinkles. These are produced for Aldi by Leone, an ice cream company in Slovenia whose products show up on Aldi shelves several times a year. If you enjoy trying different types of novelty ice cream products, these are well worth it.