Indian food is one of my favorites. I like ordering it from restaurants, but that can get pricey. However, it isn’t always easy to find good, authentic-tasting Indian food from grocery stores. Enter Aldi’s cousin, Trader Joe’s. For a limited-inventory grocery store, TJ’s has a good number of single-serving microwavable Indian options in its freezer aisle, along with some jarred sauces and pouch meals in the nonperishable goods aisles. I’m a fan of their paneer tikka masala and channa masala in particular, but almost everything is pretty good.

Most recently, I decided to try the vegan tikka masala meal from Trader Joe’s. 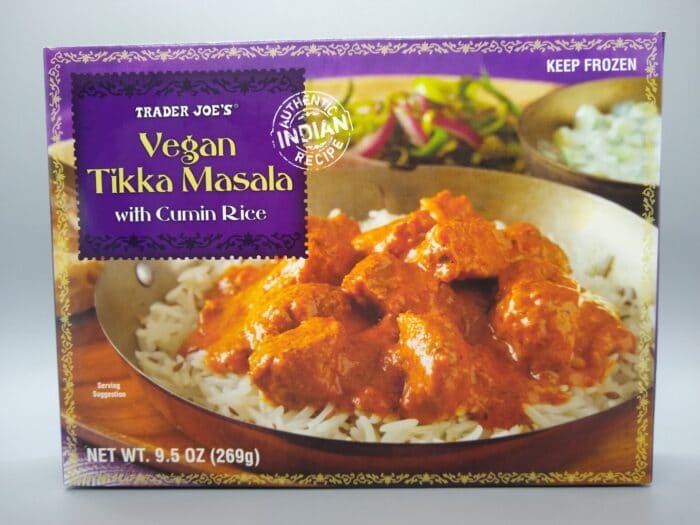 Trader Joe’s Vegan Tikka Masala with Cumin Rice cost $3.99 for a 9.5-ounce package at the time of publication.

If you’re watching out for allergens, this contains wheat, soy, coconut, and cashews. 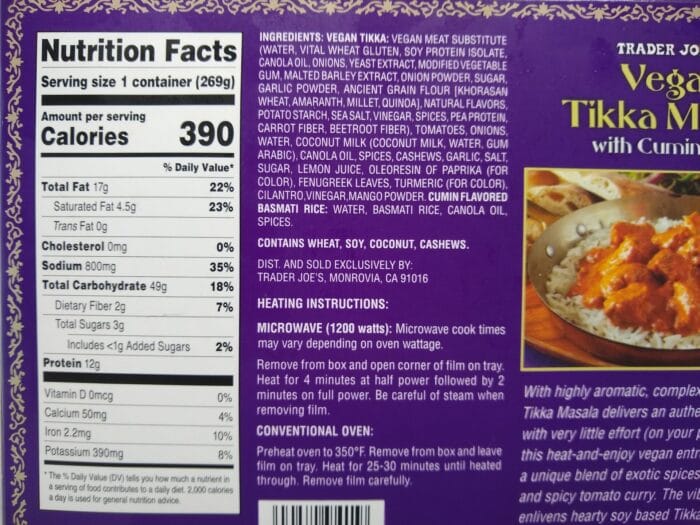 The box has directions for heating in the microwave or in a conventional oven.

To microwave, remove from the box and open a corner of the film on the tray. Heat for 4 minutes at half power followed by 2 minutes on full power. Be careful of steam when removing the film.

To bake in the oven, preheat the oven to 350 degrees Fahrenheit. Remove from the box and leave the film on the tray. Heat for 25-30 minutes until heated through. Remove film carefully.

I microwaved this meal, and it’s not quite as simple as other Trader Joe’s Indian meals I’ve microwaved, since it has to be heated on 50-percent power for part of its cook time. It also wasn’t completely hot after I followed all of the microwaving directions, so I ended up cooking it for 1 additional minute with the film off. 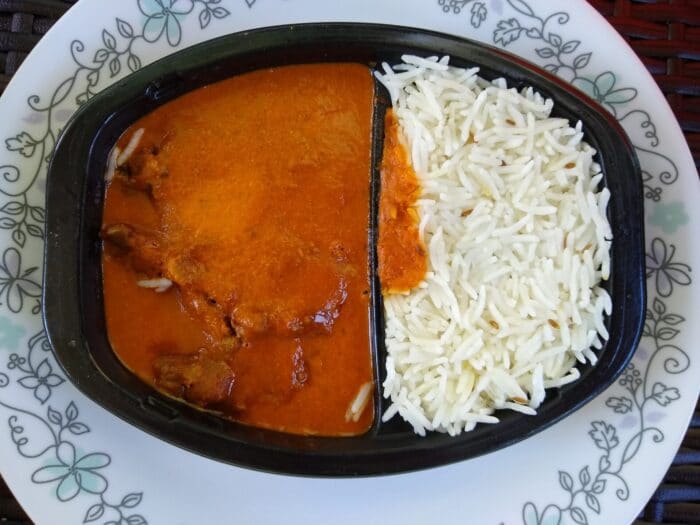 The meal comes with the rice, sauce, and a patty of spongey meat-like product that easily cuts with a fork. The soy patty is a little different, not tasting or quite having the texture of either beef or chicken, but it’s not bad. The sauce is flavorful and tastes more like authentic Indian food than some other grocery store Indian food I’ve had. It’s also not spicy. Overall, this is a decent dish, and if you eat a vegan diet and like Indian food, it’s worth trying.

Trader Joe’s Vegan Tikka Masala features a soy-based meat substitute in a savory, flavorful sauce with rice. It’s pretty good as an easy lunch for one, whether you eat a vegan or vegetarian diet or not.