In the United States, Ranch is the most popular salad dressing by a wide margin, and it has been for decades. Behind Ranch are Italian and Caesar.

Vinaigrette is defined as mixing oil with something acidic such as lemon juice or vinegar. Technically Italian dressing is a kind of vinaigrette, as it is made of both oil and vinegar, but when people speak of vinaigrette as a dressing they typically aren’t talking about Italian, but other dressings, most often using a dark kind of vinegar known as balsamic vinegar, which comes from Italy. (Raspberry vinaigrette is a variation on balsamic vinaigrette that, as you would expect, includes raspberries.)

Aldi sells a number of staple dressings, including balsamic vinaigrette. 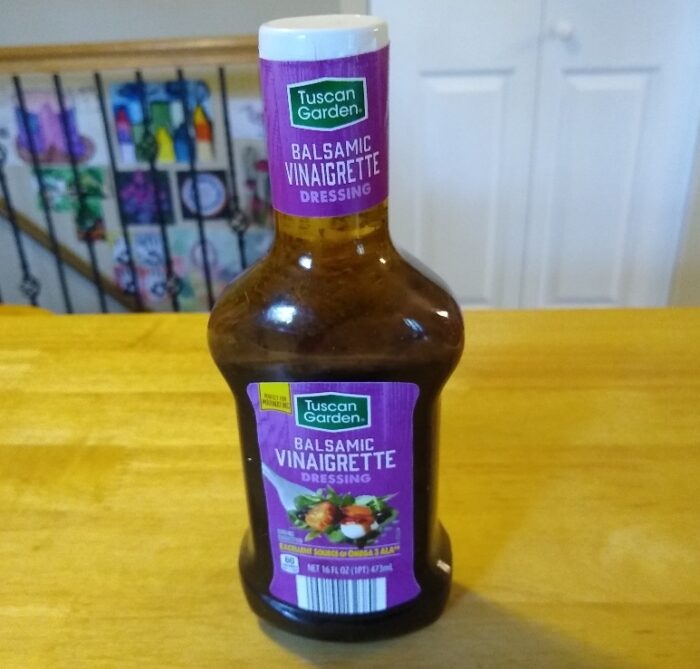 Tuscan Garden Balsamic Vinaigrette is a Regular Buy, which means you can find it in stores all the time. The 16-ounce bottle currently runs 89 cents, the same price as other Aldi bottled dressings.

If you’ve used bottled dressing before, you know the drill: remove the paper seal on top, unscrew the cap, remove the foil seal, put the cap back on, shake, and use. These can be stored unopened at room temperature, but once you break the seal you should refrigerate. You should also shake before each use.

Nutritionally, this is one of the healthier bottled dressings I’ve found. It’s relatively low in calories, fat, sodium, and carbs compared to most others. 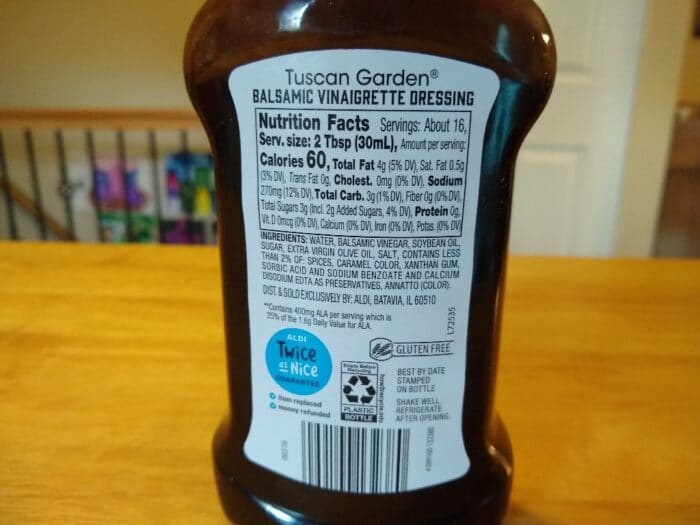 I’m not the biggest fan of balsamic vinaigrette, but I would say that this is pretty serviceable as far as the ones I’ve tried go. I’m not sure it’s restaurant quality, but we think it’s decent enough.

This is your typical Aldi dressing: inexpensive and mostly the same as name brands. I like the restaurant versions better, but this isn’t bad in a pinch, and short of making it yourself I think this is about as decent as it gets for a bottle.