In the Midwest where I live, something magical starts to happen in April. The temperature starts to trend up, frost becomes less common, and, like animals coming out of hibernation, people start heading outside.

Now, some people’s version of outside is their backyard, or maybe a local park, or possibly however much time it takes them to get to their car. But for others, outside means something altogether different. For this second class of people, outside means not just getting to nature, but getting away from civilization. For these people, getting outside means camping. (It’s no coincidence that, in my area, campgrounds open their showerhouses in April.)

Camping, like any recreational activity, can take many forms, from “glamping” in big campers to remote backpacking to the tops of mountains. Aldi knows this and rolls out an array of camping gear and accessories for glampers, backpackers, and everyone in between. For the tent camper, bedding is fundamental to the experience, and while a soft surface (be it airbed, mat, or cot) is crucial, so is something to keep you warm. Warmth is important at all times, especially in April and October, but even in the months in between: I’ve camped in June when nighttime temperatures dropped into the 40s.

The most effective source of warmth when camping at night is a sleeping bag. Aldi has sold a few kinds over the years, including this one. 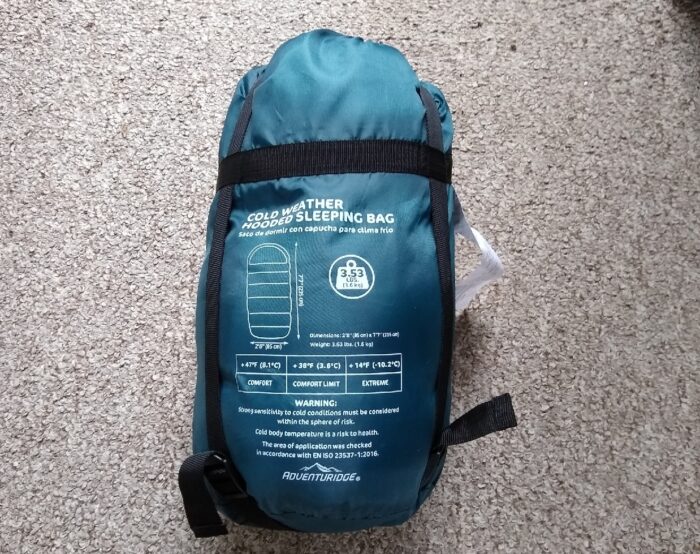 The Adventuridge Cold Weather Hooded Sleeping Bag (Product Code 700963) is an Aldi Find. That means if you can’t find it, it’s probably gone until at least next year. At the time of this post, this sleeping bag sold for $14.99. That’s competitively priced relative to other hooded sleeping bags in this temperature range.

According to the white tag on the compression sack, the sleeping bag is manufactured by a Chinese Company named Danyang Shanshui Outdoor Co., Ltd, which exports camping supplies around the world. The entirety of the sleeping bag, including the cover, lining, and filling is all 100% polyester. 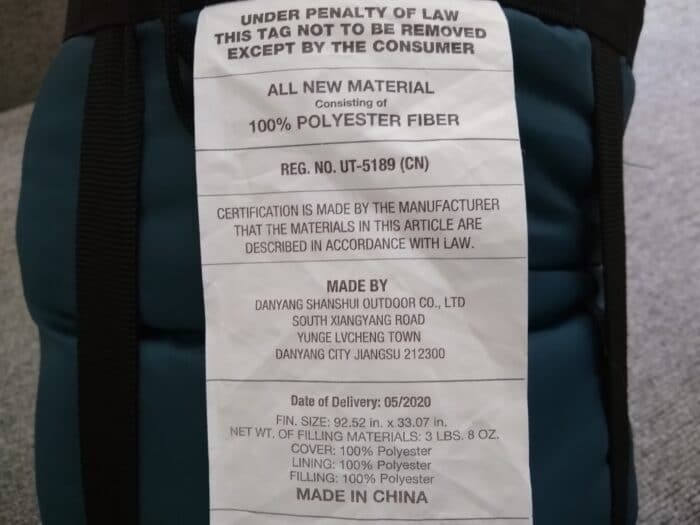 Both after-sales support and a 2-year warranty are serviced through a German company called Hanson Import ([email protected]). I wasn’t able to find out anything online about the company other than the fact that it appears to be part of product support for Aldi divisions in other parts of the world, including Germany and Switzerland. 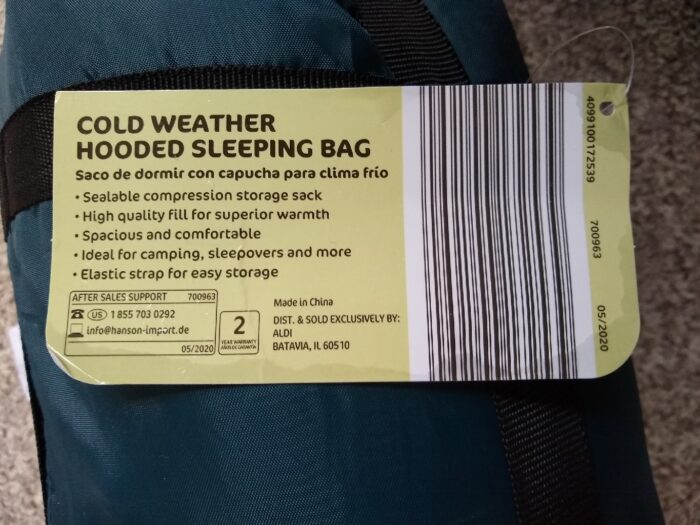 According to the product information, both on Aldi’s site and on the bag, this product:

I want to take a moment to talk about what temperature numbers mean. The standards used on this sleeping bag are based on a set of voluntary international sleeping bag standards (yes, there is such a thing) known as ISO 23537-1:2016, developed by the International Organization for Standardization. The standards were adopted in 2016 and renewed in 2019 (The sleeping bag reads EN ISO, which means that the ISO standards have been adopted by the European Union, the location where Hansen Import is located.)

There are three numbers listed: comfort rating, comfort limit, and extreme rating. Comfort rating refers to the temperature a cold sleeper might feel comfortable in; in other words, if you don’t like cold, this is as cold as you want to use this sleeping bag in. Comfort limit, meanwhile, is the temperature a warmer sleeper would feel comfortable in.

In the year we purchased this bag, Aldi didn’t put it on shelves until late May, which in our part of the country means evening lows normally average in the upper 50s to lower 60s, and at the time of this review the actual lows were in the mid-to-upper 60s … not ideal for testing a self-described cold weather sleeping bag.

Still, I put it through a few paces, opening it, getting into it, and packing it back up.

Unpacking it is easy. You simply release the vertical straps, uncinch the top, pull the bag out, and slide the flexible bands off the bag.

I tried getting in and out of it, and it wasn’t hard. The zipper worked without too much trouble, and I could draw the hood close around my face with a button-release barrel style cord lock. There’s also a Velcro-style latch right at the top where the zipper ends; I’m not entirely sure what that’s for, as I don’t see those on my other sleeping bags, but it does cover the zipper and may also help keep the hood in place even if the zipper moves a little. 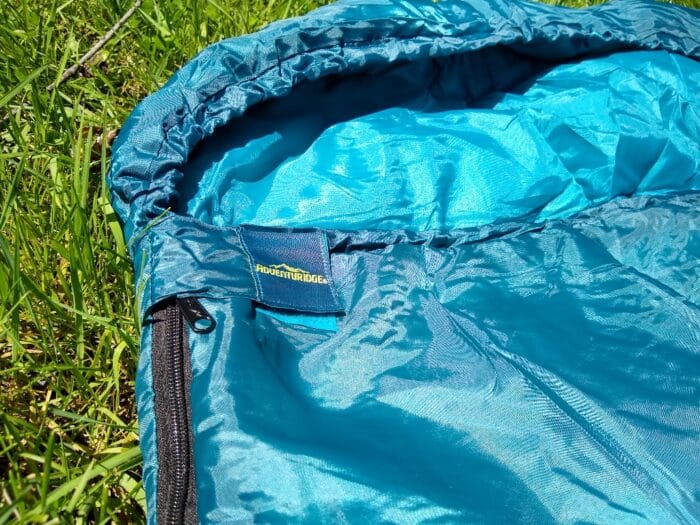 It felt warm enough, but again, it’s pretty warm right now, so a true cold weather test will have to wait for later. I can say that it was adequately comfortable: it’s not soft in the same way that my Coleman sleeping bag is — the inside of the bag feels a lot like the outside, whereas the Coleman’s inside feels more like bedding — but the interior material is not uncomfortable, and I think I could sleep fine in it. Side note: I didn’t see any storage pockets or other internal frills. 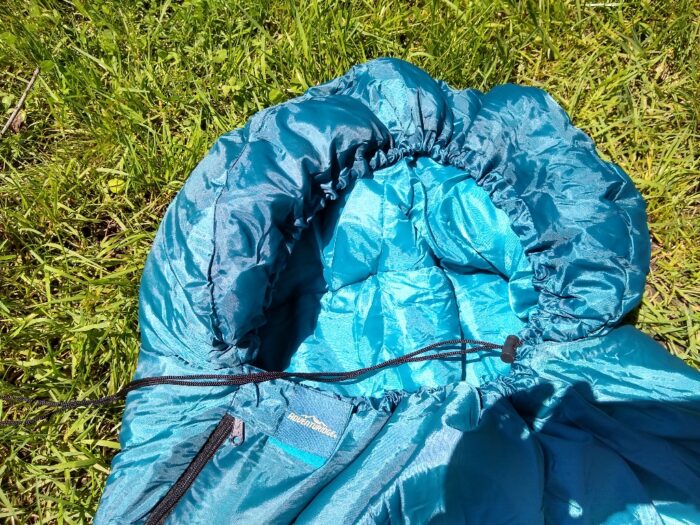 The bag from head to toe is 7 feet 7 inches long. I’m right around 5 feet 9 inches and I fit comfortably, my toes not touching the bottom. I don’t know what the upper height limit on a bag like this would be — the dimensions don’t always tell the whole story, in my experience — but I’d say it’s pretty comparable to most other standard-sized sleeping bags I’ve used.

Putting it away wasn’t too hard, and while getting it back into the bag took some work, it was actually a little easier than getting my Coleman back into its bag. (My Coleman has a zipper on the bag to compress it, but its so hard for us to push it down enough to get the zipper working that we don’t bother.)  The compression straps on the bag go on pretty easily, and the bag shrinks down to a compact profile. If I were backpacking or camping with limited space, the packed size of this bag is attractive. 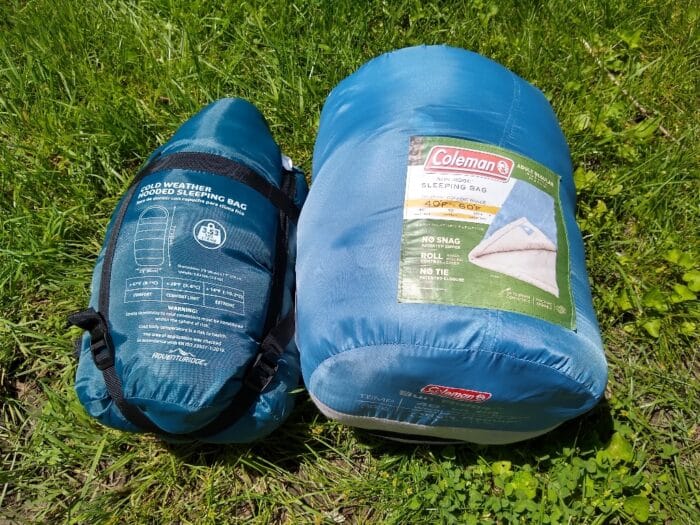 The Adventuridge (left) compared to my Coleman (right), both of them post-repacking. Both sleeping bags are 100% polyester and rate similarly in temperature, although the Coleman is hoodless and therefore not as long. Technically the Coleman can compress further with a zipper on the back, but it’s enough of a pain that we rarely bother. (Click to enlarge.)

The Adventuridge Cold Weather Hooded Sleeping Bag is a fairly basic sleeping bag. The interior material is slick rather than soft, and there aren’t many features beside the cinching hood. It’s easy to unpack, use, and pack, though, and the $14.99 price tag is lower than most others you’ll find for a bag like this. The 2-year warranty is a nice plus.