Years ago when I traveled to the United Kingdom, I sampled a variety of interesting foods. I ate lamb several times, and I also enjoyed fish and chips. I even got to try a cream tea in a tea shop in York, England.

Because Aldi is a grocery store with European origins (German, to be exact), we often see a lot of European foods at Aldi. For instance, Aldi does a German week about twice a year, usually once in the spring and once in the fall. Aldi also occasionally sells Italian food such as various pastas, sauces, and gelatos, and they sometimes offer British favorites such as lemon curd. (I’m still waiting for Aldi to sell one of my favorite British foods, clotted cream.)

Among the European treats Aldi sometimes sells are some unique colorful hard candies in various fruit shapes and flavors. These particular candies at Aldi are made in Germany, and they often seem to show up at Aldi during German week. I bought candies that looked just like these in England, and they can generally be found all over Europe. In the U.S., I’ve spotted them in some international grocery stores in my area. 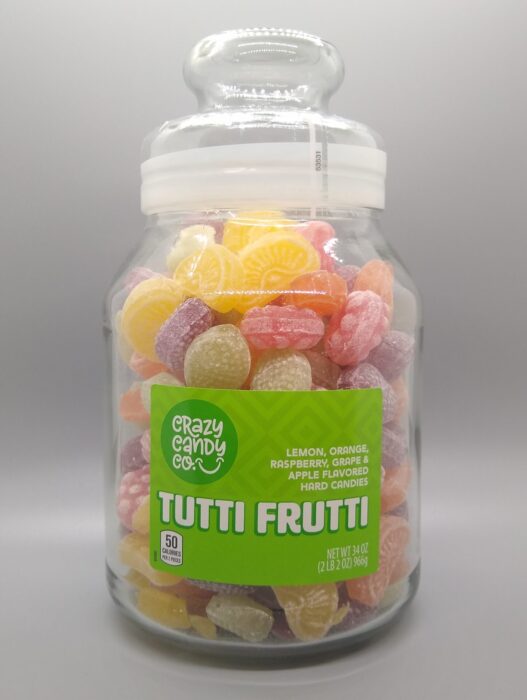 Crazy Candy Co. Tutti Frutti Hard Candies cost $5.99 for a 2-lb., 2-oz. glass jar at Aldi at the time of publication. Flavors include lemon, orange, raspberry, grape, and apple. Raspberry and apple are some of the most popular flavors in my house, but all of them are good. These are great candies to keep in the pantry or to place on a counter, table, or desktop for easy snacking and sharing. As a plus, you can re-use the jar once the candy is gone.

This candy is an Aldi Find, so it’s only in stores for a short time. Aldi does not offer online ordering for products that aren’t in stock at your local store.

Several years ago, Aldi sold name-brand Heller & Strauss Tutti Frutti hard candies that look just like these, so it’s possible Aldi still gets the candies from Heller & Strauss but now sells them under its own private candy label. 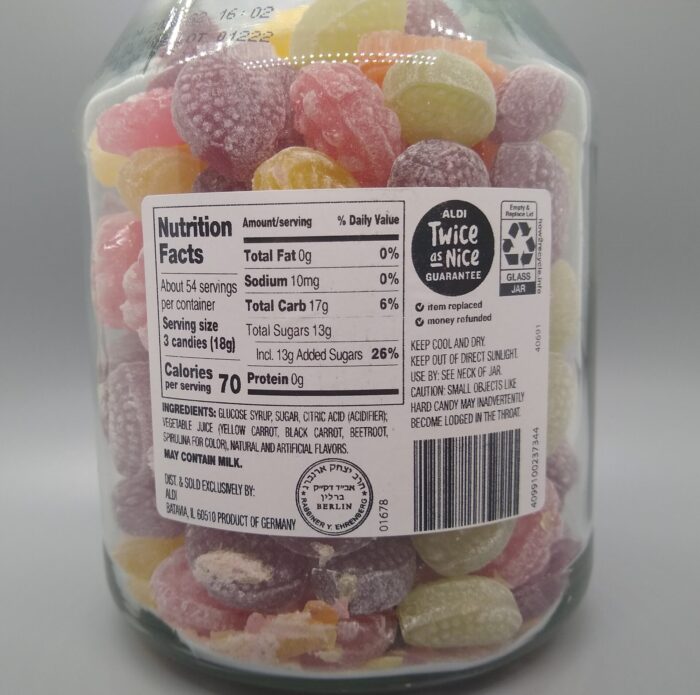 Crazy Candy Co. Tutti Frutti Hard Candies are a product of Germany, and they come in lemon, orange, raspberry, grape, and apple flavors. Hard fruit-shaped candy like this is sold all over Europe, and it’s fun to have the opportunity to purchase it in the United States.