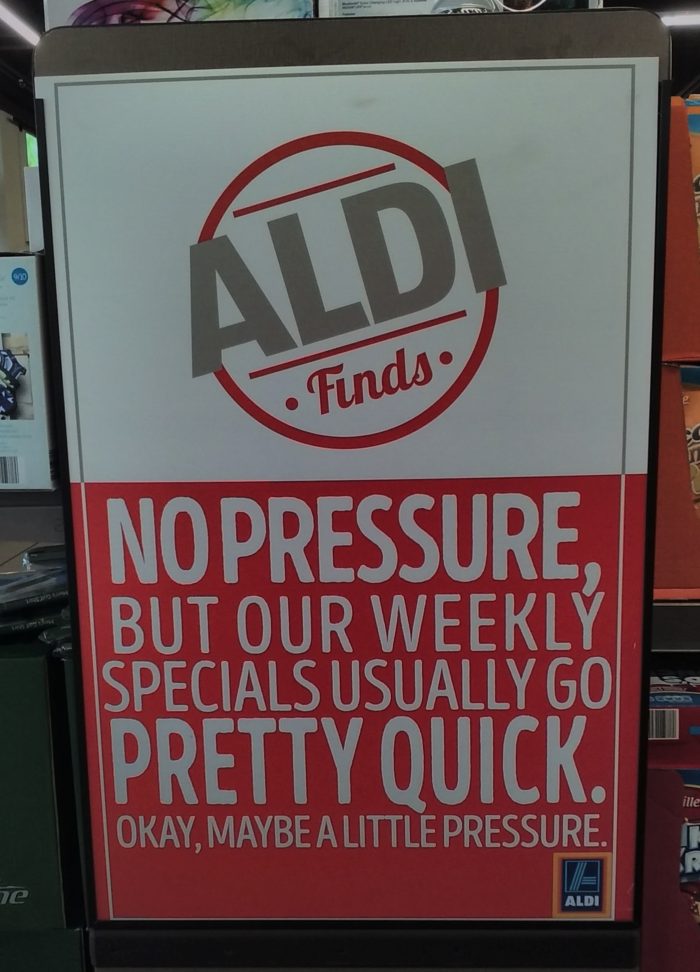 Trust us, we know.

If there’s one thing we’ve learned in this business, it’s that sometimes we see a big thing coming, and sometimes we don’t. We’ve proactively written about robot vacuums, and Advent wine calendars, and pressure cookers, and teal cabinets because we had a sneaking suspicion they would turn out to be popular items, and we were right. Other times, though, things have snuck up on us, as was the case when Aldi’s reformulated peanut butter cups suddenly became a thing.

But amidst the many items Aldi has sold, few have proven to be as mysterious and unpredictable, to us at least, as L’Oven Fresh Zero Net Carbs Bread. Perhaps because of the intriguing title, and maybe because of the current interest in keto (more on this in a moment), and no doubt because of the large and growing Aldi communities online, this little item ended up being a surprise.

Not only did it vanish from stores as soon as it arrived, but it led to a chain reaction of events we don’t see often with Aldi products. People clamored for it, stores allegedly asked each other about it, a small re-seller market sprouted up around it, and rumors swirled it might even be back again soon.

It’s a lot to think about, so let’s break it down.

In the last few years, in part due to emerging research, people have started to rethink the wisdom of a high-carb diet. Low-carb (or at least lower-carb) diets are more popular now than ever, thanks to the rise of the ketogenic (keto) diet and other low-carb regiments. Where there’s food demand, you can bet the food industry will look to meet it, which is why we’ve seen grocers, including Aldi, roll out a legion of more low-carb-friendly foods.

The hardest place to do this is with food that traditionally is made up of carbs, like foods made from rice, potatoes, or wheat. One solution is to substitute cauliflower, which is generally lower in carbs while also being gluten-free for those who have gluten considerations. (While cauliflower can lower the carbs, you should always check the nutrition information, since the decrease may not be as steep as you think.)

Bread is one of the big roadblocks to a keto diet. Bread is a staple for many meals — breakfast and lunch especially — and many keto disciples have lamented the difficulties in finding suitable substitutes for bread. Coming up with a low-carb bread is challenging: after all, bread is made from wheat, and cauliflower isn’t going to fix that problem.

The solution is not to replace wheat entirely, but to reformulate the wheat and oats in such a way that all, or nearly all, of the carbs in the bread are from fiber. This is where the “zero net carbs” label comes from, because while such bread does technically have carbohydrates in it, fiber is a type of carb that your body doesn’t absorb, instead passing it straight through. (One potential problem is that you’re putting a lot of fiber into your system, which could impact things at the other end of your digestive system.)

Whether or not you agree with the belief that this kind of bread is legitimately “keto friendly” depends on your point of view, but I think the point that your body doesn’t turn the carbs into fat or energy makes for a pretty compelling case.

A few companies have taken a stab at this kind of bread, but reviews have have been mixed. The biggest complaint is texture: getting the bread to a place where it feels like regular bread is hard, and not everyone likes the way low-carb bread feels in the mouth or going down the throat. Nevertheless, for the low-carb faithful, it’s worth at least giving it a try.

When Aldi announced it was selling Zero Net Carbs Bread among its ALDI Finds in September of 2019, we took note but didn’t figure it would make a massive blip on the radar. Sure, other Aldi low-carb items have generally been popular, but they haven’t been the kind of thing people knock the doors down over. Still, we thought enough of it that we figured we’d pick it up and try it for ourselves when it came out, at least to let the keto crowd know if it was bread-like enough to be worth the relatively reasonable $2.99 per loaf.

We couldn’t find it. 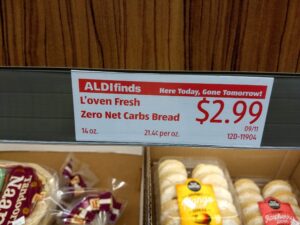 This price marker was the only sign that the bread had been in our store.

Now, in our experience, not being able to locate an ALDI Find translates to either a supply issue or a demand issue. In some cases, we’ve discovered that a product isn’t in stock because it just didn’t make it to stores. This has happened to us before, like when we had to wait a couple of weeks to get a Visage Pro Series Electric Rotary Shaver or wait a full year to finally score a Gardenline 18.5 Gallon Tumbling Composter.

Other times, a product is so popular that it flies off of shelves right away and we never get a chance to get it. This can happen, too — the Aldi wine Advent calendar is the best example — although in our experience it’s less common.

With the bread, we assumed it was a supply problem. We were wrong.

It was demand. Shoppers who had learned of the bread through various social media communities and message boards descended on the stores to score the bread the day it released, with the hype for this bread far exceeding the supply. It didn’t take long before people took to the internet to complain they couldn’t find it.

In some cases, it was the collective effort of several shoppers, but there were also reports online of single individuals flying in and buying up a single store’s entire inventory, probably intending to freeze the loaves for consumption later. (Aldi sometimes sets per-person limits on products, but it did not in this case, maybe because it, like us, didn’t expect this to happen.) In a couple of isolated cases, those mass buyers even took to eBay to resell the bread, although at the time of this post I didn’t spot more than a couple of examples of that.

Now, Aldi stores are used to people asking about long-gone products, but in this case it seems they weren’t quite sure what to do, since I’m not sure they anticipated this, either. Some of those stores allegedly even called around to other stores trying to figure out who still had the stuff. It was a rare craze on a company that actively tries to avoid dealing with crazes.

In mid-to-late September 2019, multiple people on social media — including Aldi employees — claimed that Aldi was bringing back the zero net carbs bread in October 2019 as an everyday Regular Buy. A few even showed Regular Buy price stickers to prove it. At the time, we reached out repeatedly to Aldi’s PR firm to confirm this, but we did not receive a response, and customers we interacted with who contacted Aldi customer service were repeatedly told the bread would not be returning.

However, in October, we caught sight of the bread for ourselves, on the Regular Buy shelves at one of our local Aldi stores. 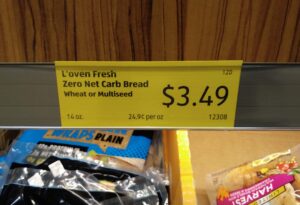 The keto bread price sticker at our local Aldi, taken in October 2019. Note that it’s a Regular Buy.

However, even as we reviewed the bread, we continued to hear from customers via comments, emails, and social media posts telling us they still couldn’t find it. What’s more, when customers contacted Aldi, they got mixed messages about the bread: some customers reported being told that stores weren’t carrying it … even after we’d seen and purchased it ourselves.

One, there didn’t appear to be any pattern to stores getting the zero net carbs bread versus those not getting it. In our relatively large metro area (St. Louis, Missouri), some of our stores had it, while other stores don’t even have a sign for it. It wasn’t clear to us how stores are chosen to get the stuff.

Case in point: we reached out directly to Aldi to ask about the first point above — namely, if there was a pattern to stores that received the bread. (We made a point to identify ourselves as bloggers for Aldi Reviewer.) Here’s the response we got:

We always appreciate hearing from our customers. Due to the limited space in our stores, we are unable to carry every product consistently throughout the year. Our ALDI Finds and Seasonal programs allow us to offer certain items for a limited time; however, we are unable to confirm details or availability for these items in advance. Every participating ALDI store receives a limited number of these products, so we encourage customers to visit our website, www.aldi.us, to sign up for our weekly email to stay up-to-date on the latest information regarding upcoming ALDI Find and Seasonal items*.

We didn’t find that very helpful.

Three, Aldi appeared to be having a really hard time keeping up with demand. Our best guess is that Aldi didn’t anticipate it, and the vendor Aldi is (or was) using, whoever that is, had difficulty scaling up production to keep up. Aldi likes predictability, so this has to be a hard situation for the grocer to be in.

Four, some customers were scooping up several loaves at a time. More than one person has boasted about picking up several loaves in one trip, possibly out of fear that if they don’t there won’t be any later. The problem is that it means that an entire store inventory can get cleaned out by just a few customers. Aldi could probably solve some of this problem by limiting customers to 1-2 loaves per purchase, but so far it doesn’t look like most stores are doing that.

Aldi, for its part, appears to be finally ramping up production. In November, we called the official Aldi customer service number, and found a recorded message saying that the grocer was looking to supply the bread year-round, and was working with suppliers to make it happen, but could not confirm a specific target date at that time. We heard rumors of a possible January 2020 date.

Those rumors proved true. In mid-January, the bread came back to stores in our area, and we heard reports online of others seeing the same. In our store, it was a limit of 2 per person.

Our understanding is that the bread should be in most markets by February 2020.

This is an ever-evolving story. Stay tuned.