EDITOR’S NOTE: See our update toward the end of this post that includes our thoughts on this shoe tower after several months of use.

My family buys our share of shoes from Aldi, ranging from hiking boots to memory foam walking shoes to trekking sandals to flats and gardening clogs and even slippers. Of course, we need a place to store all those shoes at home. Aldi has sold a variety of shoe racks over the years, including simple ones that hold a few pairs and even larger ones that hold dozens of shoes.

A pallet full of some larger-capacity shoe towers has been sitting at my local Aldi store for a few weeks, and I decided to try one. 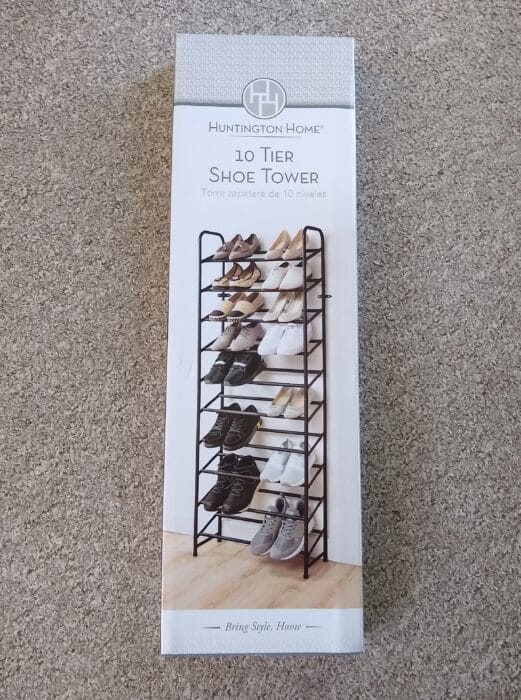 The Huntington Home 10 Tier Shoe Tower (product code 700722) cost $19.99 at the time of publication. That’s within the range of other types of shoe towers on the market.

This is an Aldi Find, which means it’s only in stores for a short time, and Aldi does not offer online ordering for its specials once they sell out at your local store. 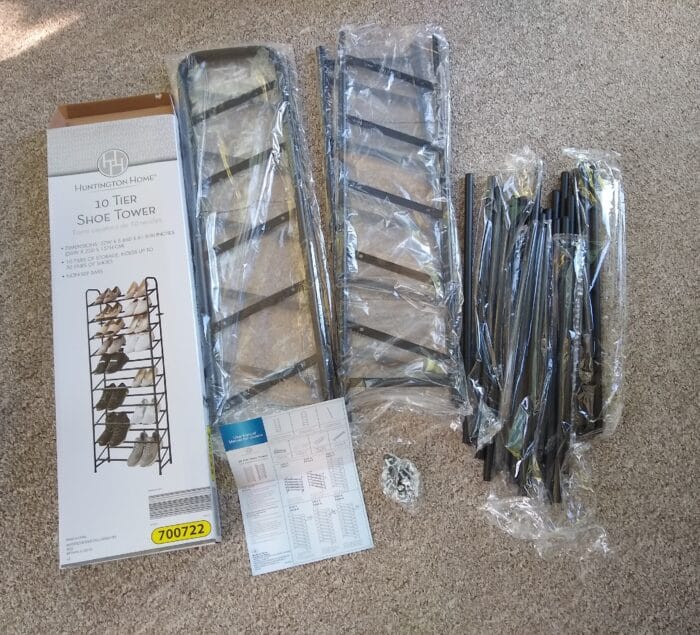 What comes in the box: the tower pieces and screws, plus an instruction sheet.

This tower measures 22 inches wide by 8.66 inches deep and is 61.81 inches tall. It claims to hold up to 30 pairs of shoes, which would be three pairs of shoes per tier, but in reality it’s more like 20 pairs of shoes or two pairs per tier. It was made in China and comes with a basic instruction manual for assembly. 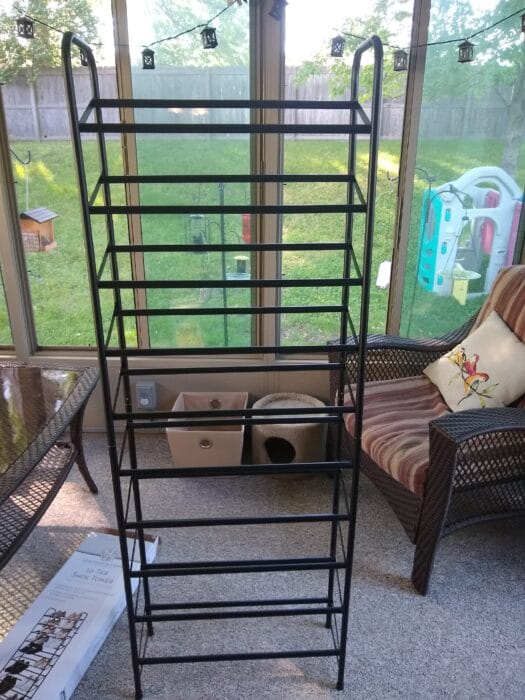 The shoe tower after assembly.

To assemble, you simply fasten horizontal support bars to the vertical frame pieces. You start by putting together the lower portion of the frame and then the upper portion, and then you connect the two. You’ll need a Phillips screwdriver, but assembly is easy. This shoe tower also comes with wall anchors to attach it to the wall for extra stability.

After putting it together, I have a few observations. 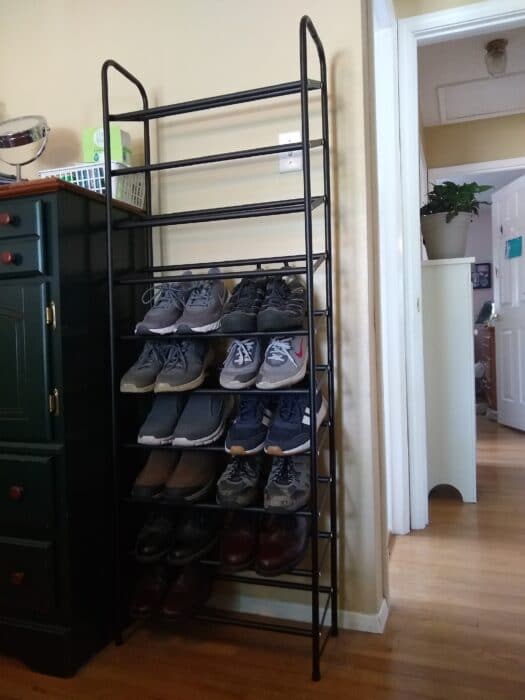 The tower in position and partially loaded with shoes.

This shoe tower is very tall, coming in at just over 5 feet tall. It’s lightweight and has a minimalist look; it holds a lot of shoes but perhaps works better than a bulkier type of shoe rack if your space is limited. I also like how this is constructed with metal bars that offer fewer spots for dust to accumulate as compared to a solid particleboard, wood, or plastic surface. 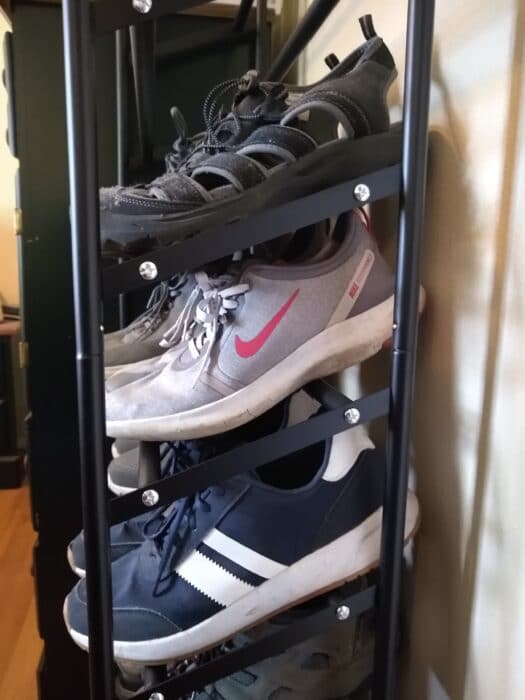 Shoes rest at an angle on the bars.

The downside is that the shoes rest on bars so that they are positioned at an angle rather than flat. While the package claims this tower has “non-slip bars,” some pairs of slip-on sandals, flip flops, and lighter shoes don’t stay on this tower as securely as I’d like them to. In fact, the best shoes for this tower are ones that have a bit of an elevated heel that can catch on the back upper bar to help hold them in place. Also, there’s not much room for taller shoes like boots on this rack.

This rack does best when it’s pulled a few inches out from the wall it’s placed against, so the back heels of your shoes can hang over the rear bar some. I don’t plan to use the wall anchors that came with this tower, but I think using the wall anchors would require positioning the tower closer to the wall, which might not work as well for keeping shoes in place.

Overall, this shoe tower looks all right, but I think there are shoe towers or shoe racks out there that hold shoes more securely. This tower gets points for having a minimalist design, but I think a better option for organizing shoes might have been the Easy Home Shoe Organizer Aldi sold last summer.

UPDATE (10/18/2021): We tried to make this shoe tower work for us, but ultimately my husband and I got frustrated with shoes frequently falling off of it. The way the shoes all sit at an angle on the racks simply does not work. It was especially irritating to accidentally bump against this shoe tower in the dark during the middle of night on the way back to bed after a bathroom visit, which always resulted in a noisy avalanche of shoes. Even during the daytime, if my husband wasn’t careful when grabbing a pair of shoes off the tower, he might send several other pairs sliding off the rails and onto the floor. We were constantly having to pick up piles of fallen shoes, so I ended up going back to using an older, smaller shoe rack instead, and this Aldi shoe tower went to the thrift store.

The Huntington Home 10 Tier Shoe Tower stands just over five feet tall and holds about 20 pairs of shoes. It’s easy to assemble and stores a lot of shoes in a small space, but ultimately we had to give this shoe tower a thumbs down because the shoes frequently fall off the angled racks.