Cinco de Mayo, which translates to “fifth of May,” celebrates the Mexican army’s victory over the French Empire at the Battle of Puebla on May 5th, 1862. Unfortunately, a year later, the Mexican army suffered a defeat that eventually led to Mexico City’s fall to French invaders. Cinco de Mayo is different than Mexico’s Independence Day, which is celebrated on September 16th and commemorates Mexico’s independence from Spain.

In the United States, Cinco de Mayo is an opportunity to celebrate Mexican culture, and especially Mexican food. There are the usual authentic dishes such as burritos, chimichangas, and enchiladas. Then there are the more unique culinary dishes that may borrow from a mashup of cultures and traditions. During the days leading up to Cinco de Mayo, Aldi sells some frozen ravioli meals that fall into the latter category. These ravioli combine the best of both Mexican and Italian cultures and cooking. 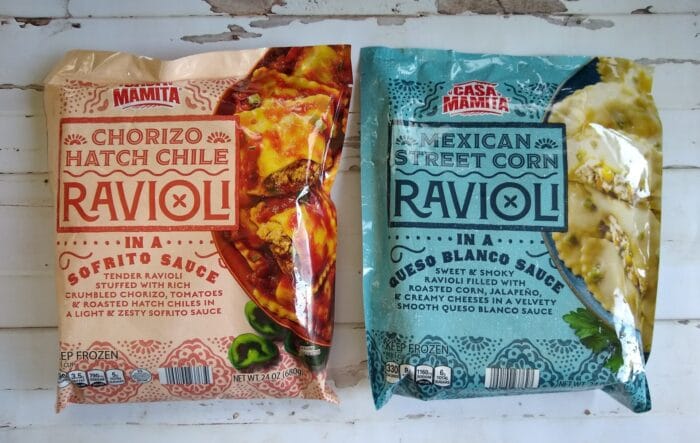 Casa Mamita Chorizo Hatch Chile Ravioli and Casa Mamita Mexican Street Corn Ravioli cost $6.79 for a 24-ounce bag at the time of publication. These are sold frozen and — when it stock — can be found in the Aldi Find freezer aisle.

These are Aldi Finds, which means they’re only in stores for a short time. You can’t order these online from Aldi if they’re not in stock at your local store.

The packages have directions for stovetop heating. Place the sauce pouch in a bowl, running cold water over it for 10-15 minutes to defrost. Once defrosted, add the sauce to a nonstick pan with the ravioli. Cover and heat over medium high heat for 5-7 minutes for the Chorizo Hatch Chile Ravioli, or 8-9 minutes for the Mexican Street Corn Ravioli, stirring occasionally, until the sauce is hot and all ingredients reach a minimum internal temperature of 165 degrees for at least 15 seconds. Toss and serve.

Both packages were easy to heat and prepare, especially on a busy weeknight. I used warm running water and worked the frozen sauce packages with my hands to help thaw and break up the frozen chunks faster.

Each bag has about three 1-cup servings (215 grams). If you’re making this ravioli the main entrée for a meal, each bag has enough for about two people, so keep that in mind if you’re serving a crowd. I served a bag of each flavor to my family of four and completed the meal with a fresh salad and some tortilla chips, guacamole, and street corn dip.

Read on for more information about each ravioli flavor.

This flavor was recommended by a friend, and it’s solid. It features a flavorful tomato-based sauce with small bits of chopped onion, garlic, and pepper. The ravioli is stuffed with chorizo crumbles, ricotta cheese, peppers, and marinara sauce. This ravioli has a kick, so some family members didn’t like it as much. If you like food that has some spice to it, though, this is an excellent dish. It’s heavily seasoned pasta with its share of carbs, fat, and sodium, so it’s best enjoyed in moderation. 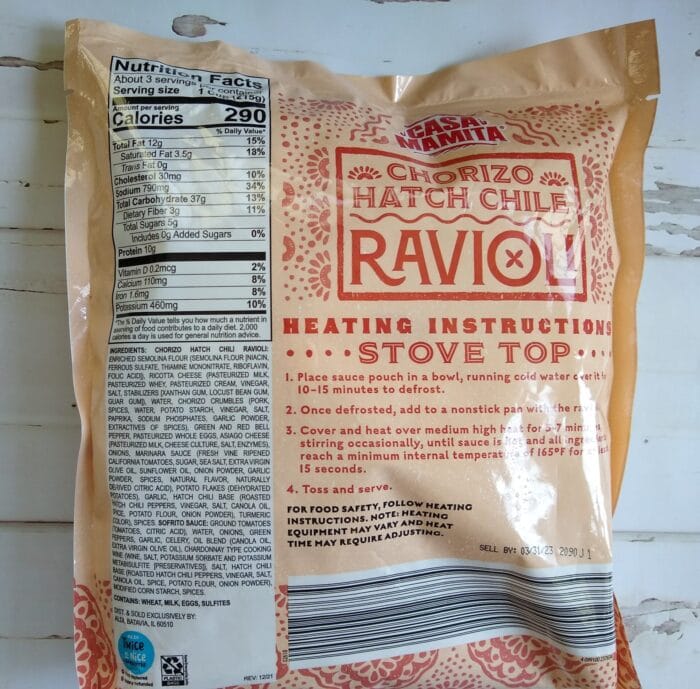 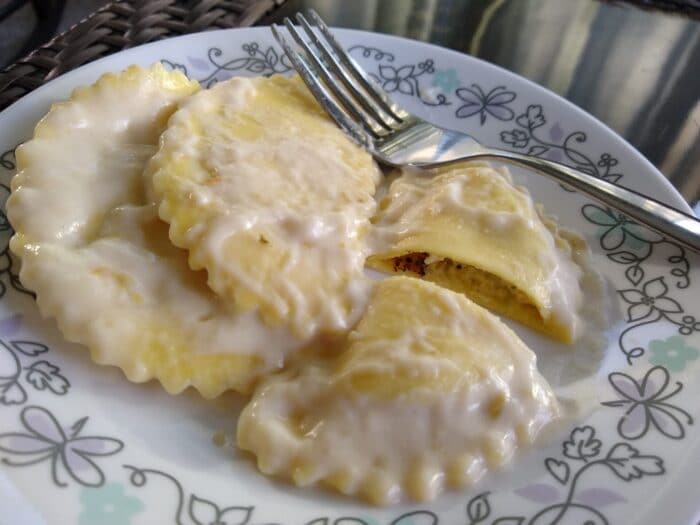 My family liked this ravioli the best, and there were no leftovers. It features a thick white cheese sauce, with ravioli stuffed with corn, peppers, ricotta cheese, and various seasonings. It’s a bit on the salty side (no surprise, when you glance at the sodium content). Overall, though, in terms of taste, this is uniquely good. Just maybe don’t look too closely at the nutrition information (including the fat, carbs, and cholesterol), and enjoy this as an occasional treat. 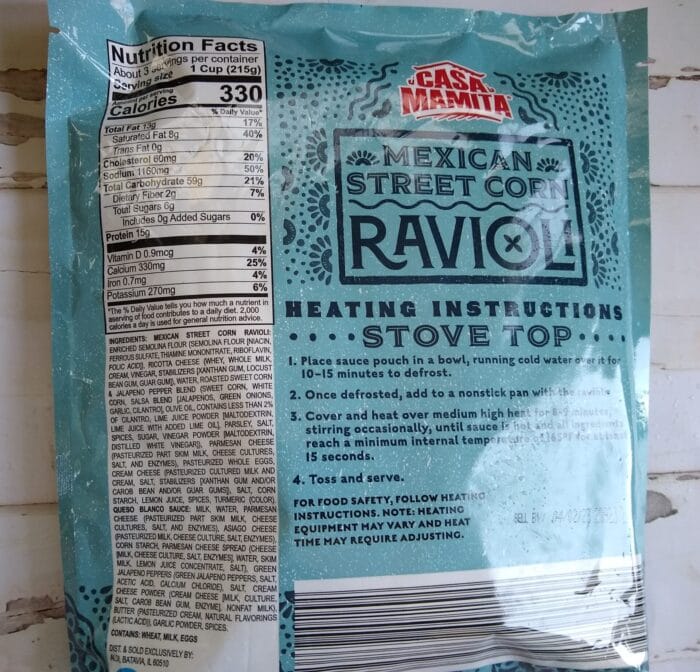 Casa Mamita Chorizo Hatch Chile Ravioli and Casa Mamita Mexican Street Corn Ravioli are a unique combination of Mexican and Italian cuisine. Both flavors are excellent. The Chorizo Hatch Chile Ravioli has some spiciness, which is not surprising. The Mexican Street Corn Ravioli is not spicy and has just the right mix of corn and seasonings. Both are good if you want something different for your Cinco de Mayo dinner.