Think of popular carnival or concession stand foods and you might think of funnel cakes, elephant ears, or frozen novelties such as ice cream sandwiches. When I worked at a youth summer camp during my college years, the concession stand sold plenty of standard treats such as slushies, candy, and potato chips. They also sold churros — long strips of crispy, ridged fried dough coated in cinnamon and sugar and packaged in paper sleeves.

Churros have Spanish and Portuguese origins, and they’re also common in Latin America, the Southwestern U.S., and in France. Sometimes they’re served long and thin, as they were at my summer camp, and other times they’re knotted. They’re a well-liked breakfast food — especially when dipped in a drink such as hot chocolate or coffee — but they’re also enjoyed as a snack. 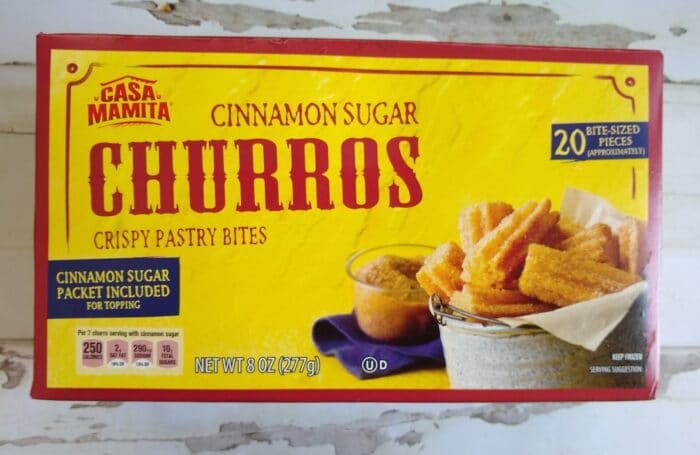 Casa Mamita Cinnamon Sugar Churros cost $3.49 for an 8-ounce package at the time of publication. When Aldi stocks them, they’re found in the grocer’s limited-time specials freezer section. The package contains approximately 20 bite-sized pieces, plus a cinnamon sugar packet for topping.

These are an Aldi Find, so they’re only in stores for a short time. Aldi does not offer online ordering for specials that are not in stock at your local store.

These are kosher. If you’re looking out for allergens, these contain egg, milk, soy, and wheat. 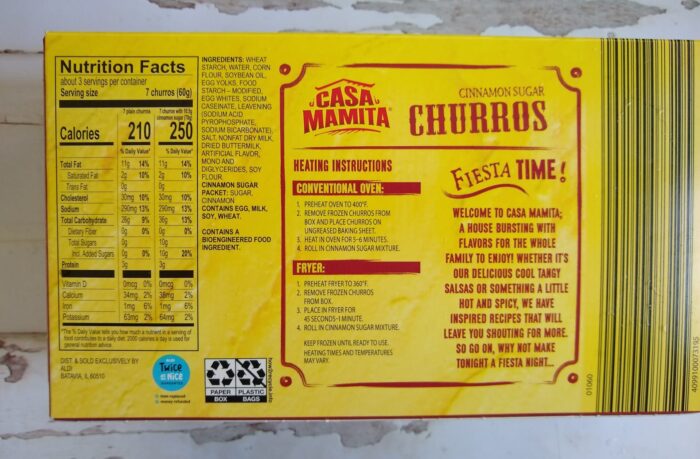 The box has directions for a conventional oven or a deep fryer.

To cook in a conventional oven, preheat the oven to 400 degrees. Remove frozen churros from the box and place the churros on an ungreased baking sheet. Heat them in the oven for 5-6 minutes. Then roll in the cinnamon sugar mixture. 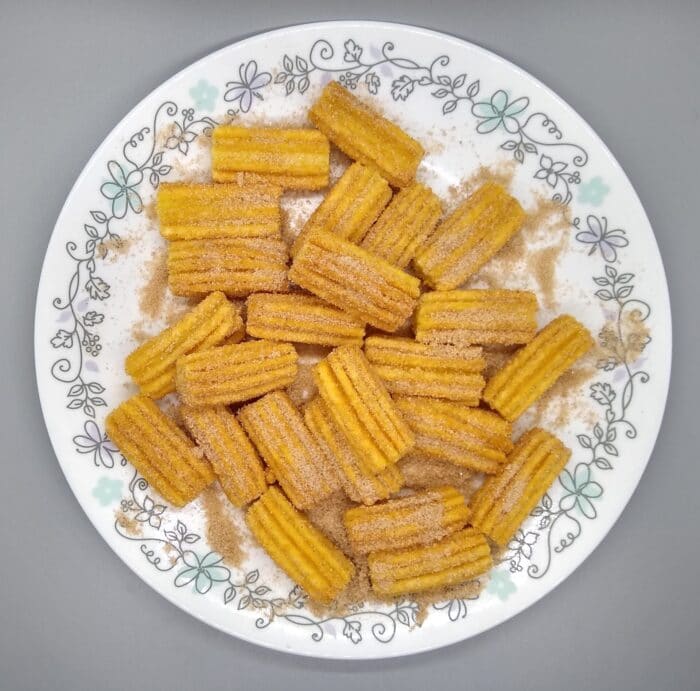 Churros after being air fried and rolled in cinnamon and sugar.

I heated these churros in my Aldi air fryer. I preheated the air fryer, setting it to 360 degrees and letting it run without the churros for about 3 minutes. Then I added the churros and air fried them at 360 degrees for 6 minutes. Afterward, I poured the cinnamon sugar mixture on a large plate, then added the churros and rolled/stirred them in the cinnamon and sugar until they were well coated. There was plenty of cinnamon sugar mixture, with some to spare left on the plate. These are an easy dessert to make, taking very little time or effort.

These were an instant hit with my family. We had 24 bite-sized churros in our box (the package says it contains approximately 20 pieces), so each of the four of us got six churros, which made a nice dessert after we enjoyed some Casa Mamita Chorizo Hatch Chili Ravioli and Mexican Street Corn Ravioli for dinner. The churros came out of the air fryer crispy and hot, and the cinnamon and sugar coating was the perfect complement to the cooked pastry. I recommend serving these with some milk or coffee for the perfect dessert or snack.

Casa Mamita Cinnamon Sugar Churros are bite-sized bits of pastry that bake or fry up crispy with just the right amount of sweetness. This dessert with Spanish and Portuguese origins is a great treat during Cinco de Mayo or any time.