Cinco de Mayo celebrates the Mexican army’s victory over the French Empire at the Battle of Puebla on May 5th, 1862. The battle lifted Mexicans’ spirits, but a year later the Mexican army suffered a defeat that eventually led to Mexico City’s fall to French invaders. Cinco de Mayo is not Mexican Independence Day, which is observed on September 16th.

In the United States, Cinco de Mayo is a time to celebrate Mexican culture, and it’s an especially popular holiday in communities with Mexican-American populations. People might celebrate with parades, music, or traditional Mexican foods.

Fajitas are among the special products Aldi sells for Cinco de Mayo. Featuring soft tortillas filled with strips of grilled, seasoned meat and veggies, fajitas are technically more of a Tex-Mex food — with origins in South and West Texas — rather than a Mexican dish, but a lot of Tex-Mex products find their way to Aldi shelves in the week or so leading up to Cinco de Mayo. Fajitas are some of my family’s favorite things to order at Mexican restaurants, so I picked up a couple of packages at Aldi to try. 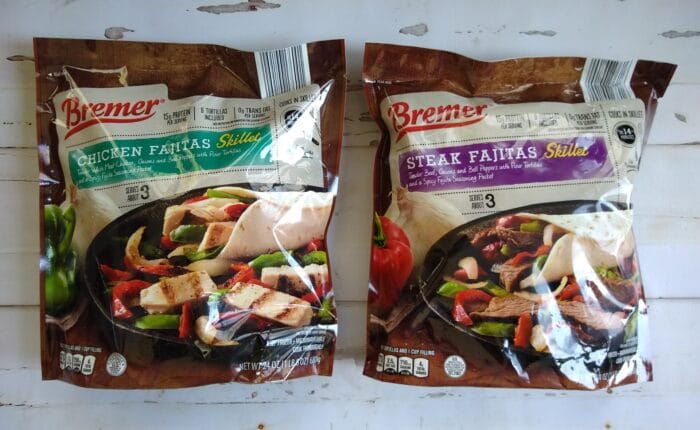 These are Aldi Finds, so they’re only in stores for a short time. Aldi does not offer online ordering for its specials if they aren’t in stock at your local store. (Aldi does sell another chicken fajitas kit — minus tortillas — as an everyday, year round Regular Buy in its refrigerated aisle.)

The packages have directions for cooking the fajitas on a skillet on the stovetop (recommended) or in the microwave.

To heat on the stovetop, heat one tablespoon of oil in a skillet on medium-high heat for one minute. Saute the chicken or beef, vegetables, and seasoning over medium-high heat for 10-12 minutes, stirring occasionally for even cooking. Remove the tortillas from their plastic bag and place them on a microwave-safe dish. Microwave the tortillas for approximately 1 minute and 30 seconds or until heated thoroughly.

To microwave, place the frozen chicken or beef, vegetables, and seasoning in a microwave-safe dish. Cover and cook on high for 5 minutes. Stir and heat for an additional 4 minutes and 30 seconds. Remove the tortillas from their plastic bag and place on a microwave-safe dish. Microwave the tortillas for approximately 1 minute and 30 seconds or until heated thoroughly. Let stand 1-2 minutes before serving. 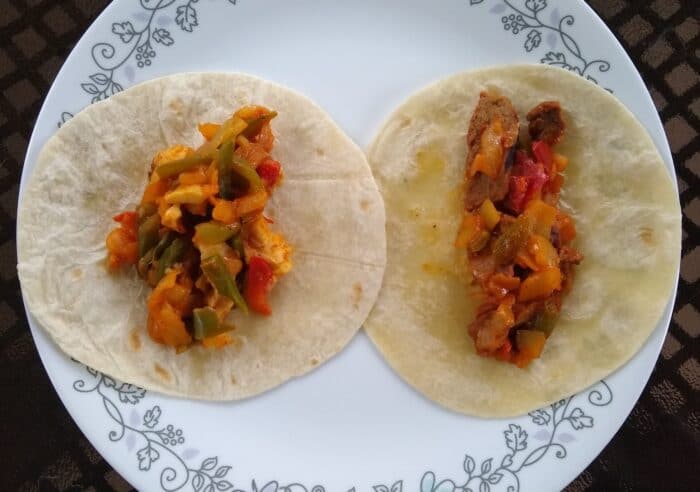 I opted to heat these fajitas on the stovetop. They come together quickly and easily. The meats and veggies are all packaged loose in the bag, and each bag contains a separate packet with six flour tortillas and another packet with a seasoning mix. These fajitas both have a medium level of spiciness, so if you want milder fajitas, you might consider using less of the seasoning packet. (Or some of my family members cut the spice by adding a spoonful of sour cream to their fajitas.)

My family thought these were good. We felt like we had to be careful not to overfill our tortillas in order to have enough filling for all six tortillas in each package, but there was enough filling to go around. Both the chicken and steak were tender. Because everything was frozen, the veggies are softer than what you’d get in fajitas you might make yourself or order in a restaurant using fresh vegetables. That didn’t bother us, though.

Fajitas aren’t hard to make yourself, but these are a good alternative if you want something quick and easy.

Keep reading for more information about each fajita variety. 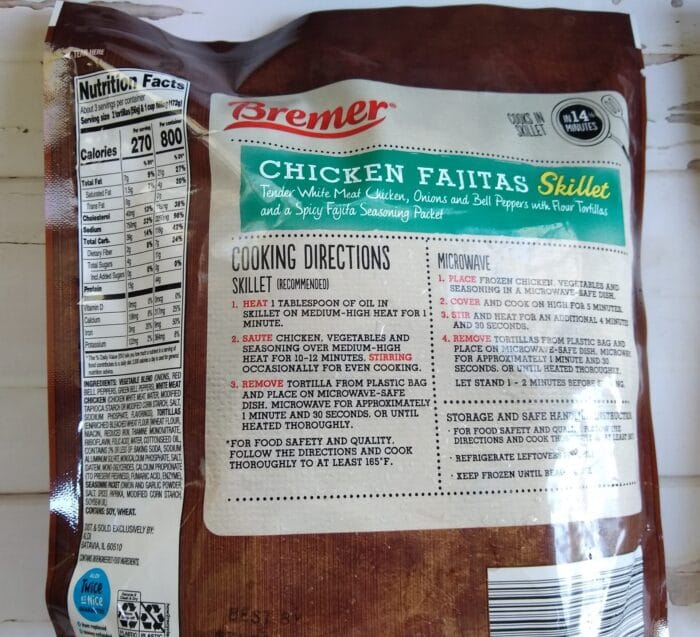 If you’re looking out for allergens, this contains soy and wheat. 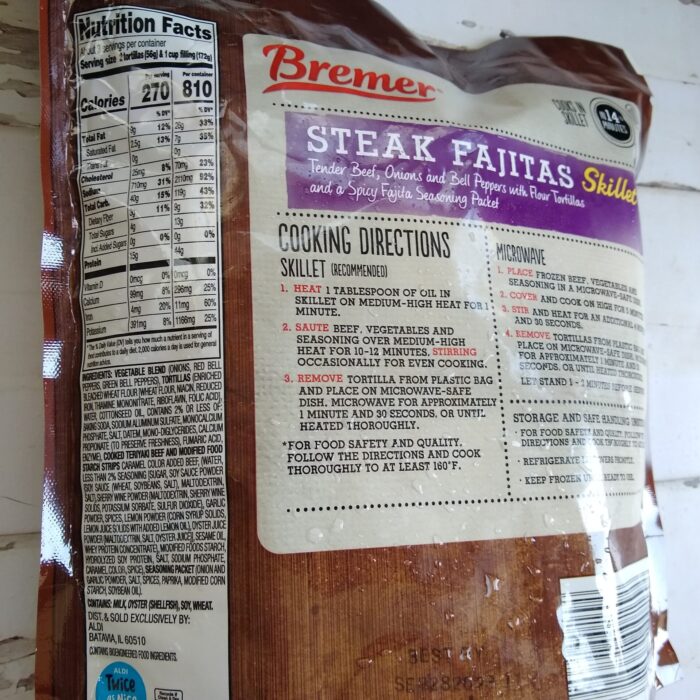 If you’re watching out for allergens, these contain milk, oyster (shellfish), soy, and wheat.

The Bremer Chicken Fajitas Skillet and Bremer Steak Fajitas Skillet feature tender meat, peppers, onions, and seasonings. They come with tortillas, so you have everything you need for a complete fajitas dinner. The seasoning packet is a little spicy, so if you want mild fajitas, try using less of the seasoning. If you’re in the mood for fajitas, they don’t get any easier than these kits.