Tex-Mex is a popular thing in the United States, and not just in the American Southwest. From Taco Bell to mom-and-pop local restaurants, you’re liable to find tacos, burritos, and nachos even in small Midwest towns. Most grocers carry a range of Mexican-inspired products, be it taco shells, salsa, Mexican cheeses, refried beans, and so on.

Aldi carries a pretty decent selection of Tex-Mex, both in its Regular Buy section and, occasionally, in its ALDI Find (Special Buy) area. Most of it is under the Casa Mamita private label.

Not too long ago, I noticed that one of Aldi’s Regular Buy Tex-Mex offerings, Casa Mamita Salsa Con Queso, came in second in a grocery store taste test over at Serious Eats. Intrigued, we decided to put the queso to our own test on the weekend of the Big Game. 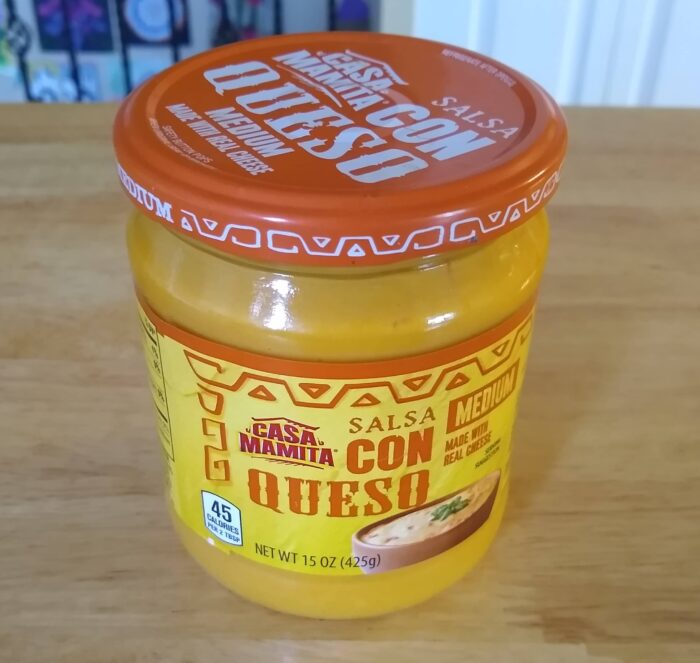 Aldi’s queso is a Regular Buy, meaning you can find it in stores all the time. At the time of this post, the queso runs $1.95 for a 15-ounce jar, which is a lot less than the name-brand queso we see at our regional big-inventory grocery stores. It comes in the typical vacuum-sealed glass jar, meaning you can store it at room temperature until you open it, after which you should refrigerate it. The jar, incidentally, is recyclable.

The jar doesn’t come with any preparation instructions, although making it isn’t hard. This queso is best served warm, and you can get it there in a number of ways. By far the easiest is the microwave, but you could also heat it in a saucepan or Crock Pot if you really wanted to. If you microwave it, I would strongly suggest putting however much you need in a separate microwave safe-dish, and then heating it until it reaches the desired temperature, stirring it every so often to make sure it’s heated consistently.

I was pretty impressed with this queso. It heats up easily, and it keeps a pretty good consistency even after it has cooled a little. The taste really is fabulous: it’s a rich flavor with a modest amount of kick. I don’t know if I’d call it a full medium, but it’s a step above mild … and even as someone who doesn’t really like spicy foods I thought it had a nice kick.

I wasn’t alone. The people we had over for company devoured this cheese.

Nutritionally, there are a couple of considerations. One, it is — like most jarred quesos — heavily processed, with a long list of ingredients. (You could make a homemade queso with a lot fewer.) Two, it is fairly high in sodium and also has some fat. 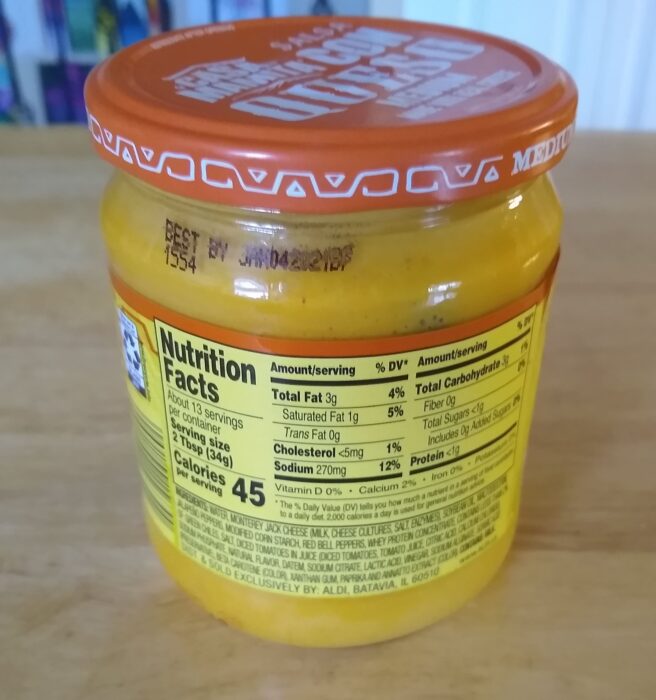 As con queso dips go, this is a pretty legitimate one. The texture and taste are both very good, and it’s easy to make. Recommended.