Aldi is not a hardware store. You can’t go in at any time and get bolts, duct tape, glue, paint, or a pair of safety goggles. If you are hard-pressed for the equipment to get a DIY job done, you’re not going to Aldi.

However, Aldi does sometimes rotate in a few of the things you could buy at a hardware store. The German supermarket, for example, stocks various outdoor necessities throughout the year, including lawn mowers and weed trimmers. Aldi also is known to sell hand tools like drills, hammers, and even the occasional torque wrench.

For a long time, the outdoor stuff was sold under the Gardenline house brand while the indoor stuff and tools were under the WORKZONE brand, but in recent years Aldi has consolidated most of its hardware under the FERREX private label. (None of these are separate companies, but they are brands Aldi uses to sell products.)

The grocer has been selling screwdrivers off and on for years, too, mostly of the cordless variety. 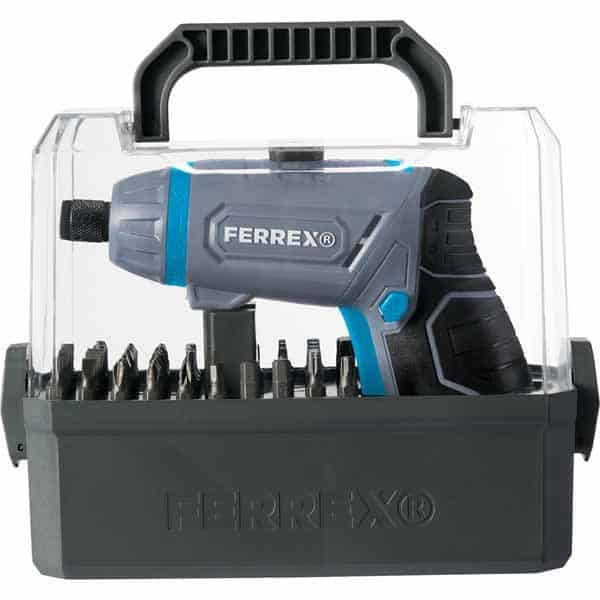 The FERREX 4V Cordless Screwdriver (Product Code: 817180) is an Aldi Find. It’s only in stores for a limited time — each store gets just one shipment — and once it’s sold out, you won’t be able to find it until it comes back. Most of the time, Aldi Finds are an annual thing, so if you can’t score one now, you’ll probably have to wait until the next year to get your hands on one. Aldi doesn’t ship online, either, so if you can’t find them in stores, you’re out of luck.

At the time of this post, the screwdriver cost $24.99. That’s on par with other non-name brand 4V cordless screwdrivers I can find online. It’s $5 more than the 3.6V screwdriver Aldi sold in 2021, but it also has a little more power.

A 4V (4 volt) screwdriver is on the lower end of power as far as screwdrivers go. This will be okay for light duty work around the house, but if your project requires a lot of power — like trying to get a screw into a wood stud after you’ve drilled a pilot hole — you’re likely going to need something more powerful. If you’re trying to thread something into a space that it’s already fitted into, though, this should do the job.

Here are more features, according to Aldi:

We haven’t tested this screwdriver, so we don’t know how quickly it charges, how well it operates, or how long the charge lasts. We also don’t know how durable the screwdriver or the bits are. That’s why we’ve created this open thread for users to share their experiences.

Have you used this cordless screwdriver? Let us know about it in the comments.