It wouldn’t be Thanksgiving for many people without pumpkin pie on the dessert table. There are plenty of ways to get your pumpkin pie fix. You can purchase ready-made pies from the grocery store so all you have to do is set out the pie and slice it. (And don’t forget the whipped cream!) Aldi sells ready-to-serve pumpkin pie. So does Aldi’s cousin, Trader Joe’s. In fact, ready-to-serve Trader Joe’s pumpkin pie is so good that your dinner guests might think you made it from scratch.

Keep reading for the full review. 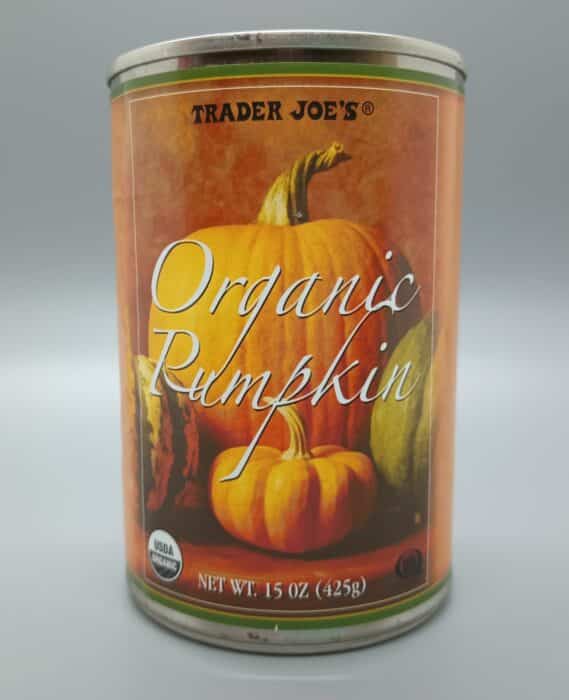 Trader Joe’s Organic Pumpkin costs $1.99 at the time of publication for a 15-ounce can.

The only ingredient is organic pumpkin. This is certified organic by Quality Assurance International.

If you don’t use all of this canned pumpkin at once, refrigerated the unused portion in a separate container. 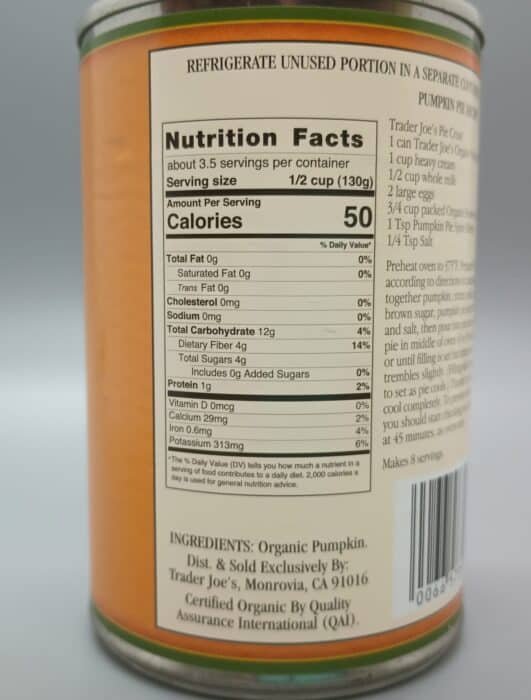 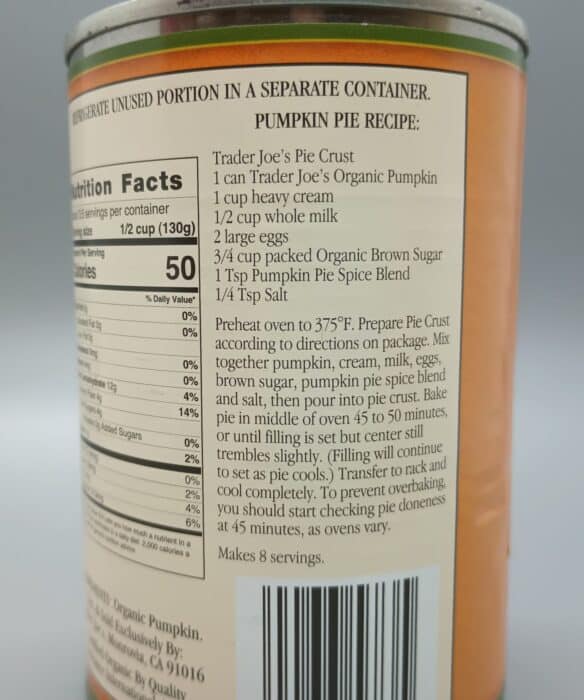 The back of the can label includes a pumpkin pie recipe that you can make using all ingredients from Trader Joe’s.

Once this pie has cooled (which shouldn’t take more than two hours), you’ll want to refrigerate it. That’s because it contains milk, cream, and eggs. 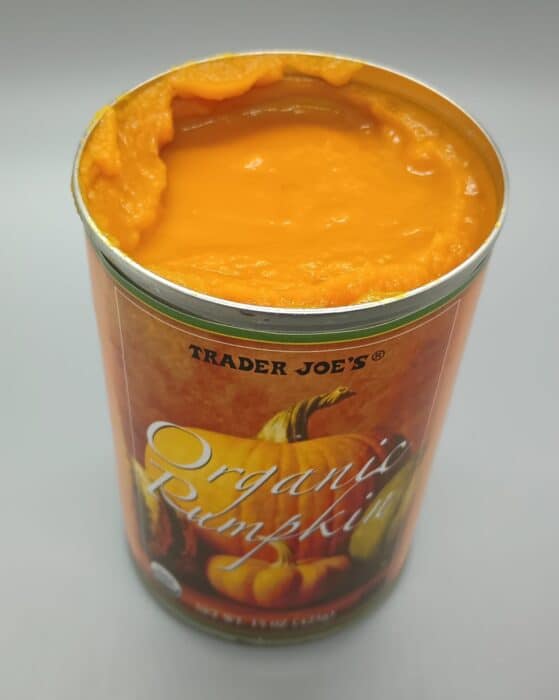 I followed this recipe exactly as it instructs. I used a Trader Joe’s frozen boxed pie crust to make this pumpkin pie. I initially wasn’t sure if I needed to do any prebaking of the pie crust before putting the filling in. The recipe on the TJ’s canned pumpkin says to prepare your crust according to package directions, but the Trader Joe’s Pie Crust directions say to prepare the crust according to your recipe. Ultimately, I arranged a single uncooked crust in a 9-inch pie pan. This is what the directions say to do when I use the recipe on the back of a can of Aldi pumpkin, so I went with what I know works.

I then mixed up all of the ingredients for the filling in the recipe on the Trader Joe’s canned pumpkin. You’ll get a fairly smooth mixture just stirring together the pumpkin, cream, milk, eggs, sugar, pumpkin pie spice blend, and salt by hand, but I pulled out my hand mixer to make it really smooth.

By the way, if you don’t want to buy Trader Joe’s Pumpkin Pie Spice or don’t have any on hand, it’s simply a mixture of cinnamon, ginger, lemon peel, nutmeg, cloves, and cardamom. For review purposes, I used the TJ’s Pumpkin Pie Spice so I could follow the recipe on the pumpkin can exactly.

I couldn’t quite fit all of the pie filling into my 9-inch crust. I had to leave out at least 1/2 to 3/4 of a cup of pie filling, even using a small measuring cup to empty some of the filling out of the pie prior to baking because I realized I couldn’t move it to the oven without it spilling over the sides. When I make pumpkin pie using Aldi refrigerated rolled crusts and the pie recipe on Aldi canned pumpkin, I can just barely fit all of the pie filling into my pie pan. The Trader Joe’s pie crusts feel thicker compared to Aldi crusts, so that could factor into it, or the measurements and proportions are just a little different in the recipe on the Trader Joe’s canned pumpkin. 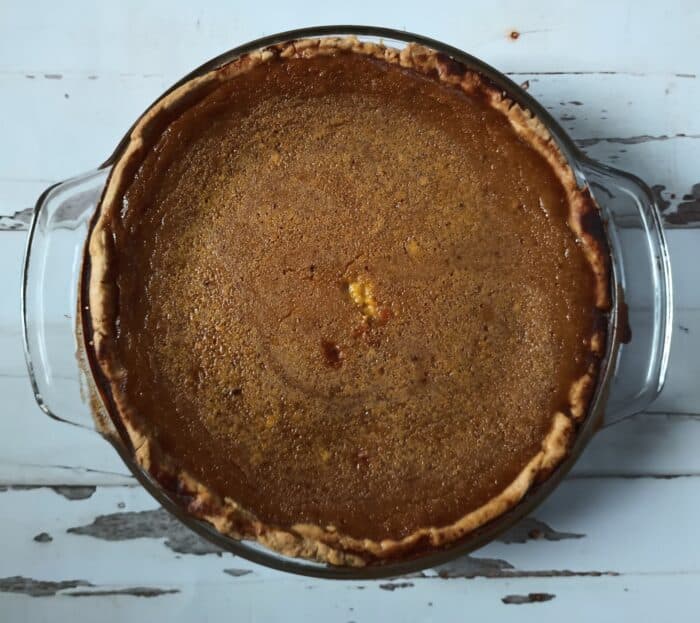 The pie after baking.

The recipe on the TJ’s canned pumpkin says to bake for 45-50 minutes. I set my oven timer for 40 minutes to start, and I ended up baking the pie for 50 minutes. The filling was still a little jiggly when I pulled the pie from the oven at 50 minutes, but pumpkin pie is always a bit jiggly when it’s fully baked, I didn’t want to overbake it. Also, by this point, the outside of the pie was a deep golden brown, and the crust looked done. (As mentioned above, I initially filled the pie crust too full and had some filling spill over the sides, which is why some of the crust looks darker in photos.) 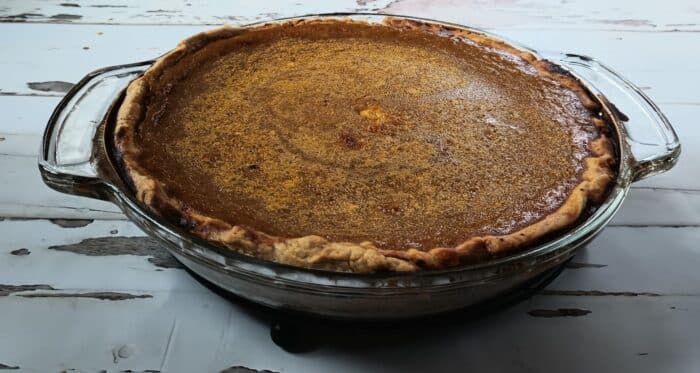 I let the pie cool on my countertop for about 1.5 hours, then put it in the fridge for another hour or so to slightly chill it before serving. 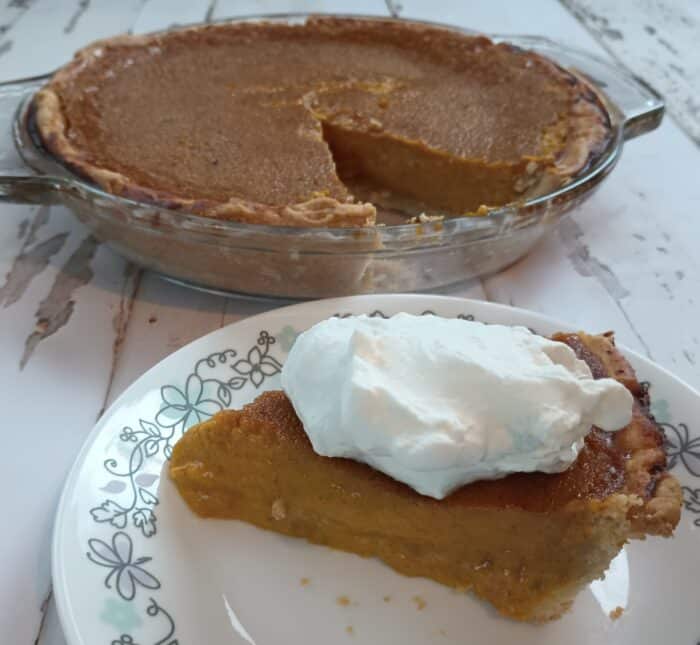 Lesson Learned: Chill in Fridge for a Full Day Before Serving

I soon learned that it is best perhaps to make this pie a day ahead of time so that it has a long time to chill and get firm in the fridge. It was initially on the soft side when I sliced and served it after several hours of cooling and some time in the refrigerator. The filling was not exactly runny, but it definitely wasn’t as firm as other pumpkin pies I’ve eaten. The slices had a tendency to fall apart as I moved them from the pie dish to a plate. We’ve eaten pumpkin pies made with all-Aldi ingredients on the same day we baked them and haven’t had this problem.

One of our child taste testers remarked: “It’s like if you made pumpkin gelato and then left it out in the sun for a while.”

At first, I wondered if I should have baked the pie for another 5 to 10 minutes to help the filling solidify more, but as my family sampled the pie, we realized the crust tasted well done, and a bit on the hard, dry, crumbly side. So I didn’t think the crust would have benefitted from additional baking time. I also thought that when I initially opened the canned pumpkin to put it in the recipe, it seemed a little more liquid-like than I remember canned pumpkin typically being like. So it’s possible the canned pumpkin has too much moisture content and that is affecting the the recipe, but I’m not sure. 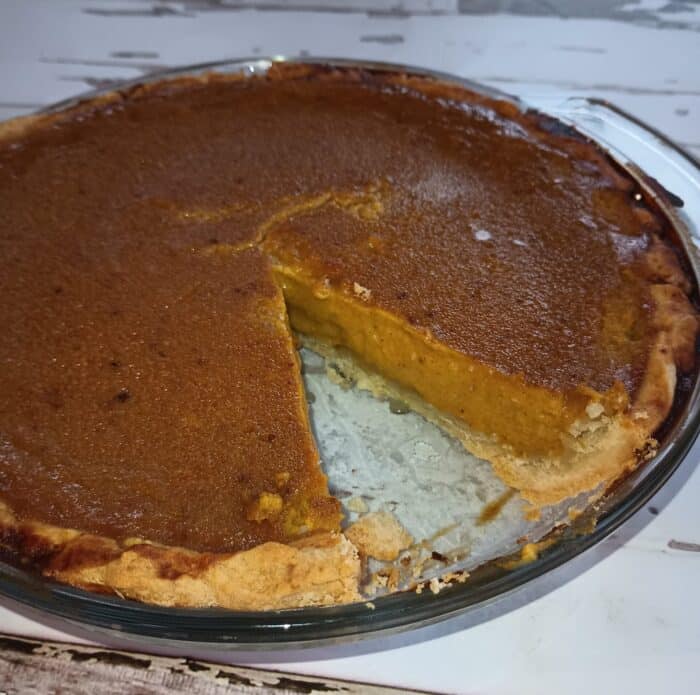 This pie came out with a dark brown exterior, a thick, dry crust, and an interior filling that was very soft.

I let the pie sit in the fridge for a couple of days, and no one touched it, thinking it was too runny. But then I took a closer look and realized it had solidified as it languished in the refrigerator. The top of the pie was no longer a dark brown. Instead all of the filling was a light brown, and it held its shape. The crust had also absorbed some of the moisture from the pie filling and was no longer dry and hard. So I think we salvaged this pie. It just took a couple of days. Based on that experience, though, I’ll probably stick with my tried and true Aldi pie recipe over this Trader Joe’s recipe.

Trader Joe’s Organic Pumpkin comes with a pumpkin pie recipe on the back of the can, so you can make a classic holiday dessert using all-Trader Joe’s ingredients. While the canned pumpkin on its own is all right, the pie recipe came out runnier than we expected, which surprised us because we’ve made plenty of other pumpkin pies using a different recipe on the back of the canned pumpkin that Aldi, Trader Joe’s cousin, sells. It took a long time chilling in the fridge for this pie to solidify and hold its shape when sliced. If you make this pie, you might want to give it a full day to chill in the refrigerator before serving it. Otherwise, it tastes all right.