Skip to content
Home News Aldi is Cutting Back on Aldi Finds Again. Here’s Why It Might Be Happening.

Aldi is Cutting Back on Aldi Finds Again. Here’s Why It Might Be Happening.

Over a year ago, back in April of 2020, we noticed that the Aldi weekly ad — which contains the grocer’s Aldi Finds and other assorted limited buys — had shrunk. Instead of the normal 4 pages or so of products, the ad only had two. At the time, the reason was straightforward: America was in the early days of a pandemic, and Aldi was cutting down on Aldi Finds to make more room for certain staple products, which at that time were in short supply.

By mid-summer, the weekly ad had by and large returned to its normal 3-4 pages, and, thankfully, the mad run on toilet paper had ended.

Fast forward to early August of 2021, and we’re seeing this: 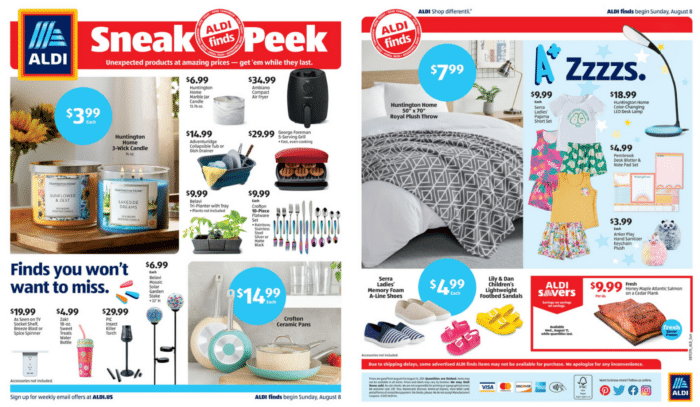 This is the entire weekly ad for the week of August 8, 2021. It’s usually bigger.

So what’s going on?

Unlike in 2020, Aldi isn’t dealing with a run on staple supplies, and Aldi Finds appear to remain a popular option for the store, so we don’t have reason to believe they’re being phased out.

Instead, we suspect the reasons are different this time, and they’re all related to shipping delays. Like many retailers and grocers, Aldi has been hit hard by problems getting its non-food products into stores. It’s so bad that Aldi has, at the time of this post, created a page dedicated solely to listing what products might be running late.

Those delays create two big problems. One, they mean that products in the ad aren’t always showing up. When shoppers arrive expecting to see a product, they can’t find it. This is bad enough when Aldi superfans make a run on an Aldi Find, but it’s even worse when the product never shows up at all.

Two, those delays mean that the product randomly shows up later, usually out of the blue. Several times in the last couple of months I’ve walked into a store only to see a load of Aldi Finds that were supposed to show up weeks earlier now stacked on the shelves. For stores, it’s a pain because it makes shelf-stocking unpredictable. For customers, it means that there isn’t any advance notice of products they might be waiting for, even as they arrive looking for products that have been delayed.

I can only imagine the kind of havoc those product delays are creating for Aldi, whose well-oiled inventory machine depends on predictability and efficiency.

For that reason, cutting back on Aldi Finds, at least temporarily, makes sense. It lets the grocer make space for the stream of late Aldi Finds coming in, while avoiding the headache of customers coming in and not being able to find the things promised in the ad. It’s a reset, if you will.

Hopefully, as the supply chain works itself out, we’ll see the Aldi ad return to its normal size again.