EDITOR’S NOTE: Trader Joes, which is a cousin to Aldi, also sells street corn chips. You can read our review of the Trader Joe’s chips here.

When spring comes around, it means several things at Aldi. One, gardening supplies start showing up on the shelves. Two, it’s nearly time for the twice-yearly German week at Aldi. And three, we can count on all kinds of Tex-Mex and Mexican-inspired foods to arrive in time for Cinco de Mayo.

Cinco de Mayo, which tends to be a bigger deal in the United States than in Mexico, is literally translated “fifth of May.” It celebrates the Mexican army’s victory over the French Empire at the Battle of Puebla on May 5th, 1862. The battle lifted Mexicans’ spirits, but a year later the Mexican army suffered a defeat that eventually led to Mexico City’s fall to French invaders.

Cinco de Mayo is not the same as Mexico’s Independence Day, which is celebrated on September 16th and commemorates Mexico’s independence from Spain.

In the United States, Cinco de Mayo is all about celebrating Mexican culture, and that includes a lot of food. Some of the Mexican foods that hit Aldi shelves this time of year might be more authentic than others. You’ll see more traditional things such as fajitas and street taco kits, mini empanadas, seasoned tortilla chips, churros, or tamales, and you might find more novel products such as taco meatballs, chorizo hatch chile ravioli, or these unique street corn-flavored dipper chips pictured below. 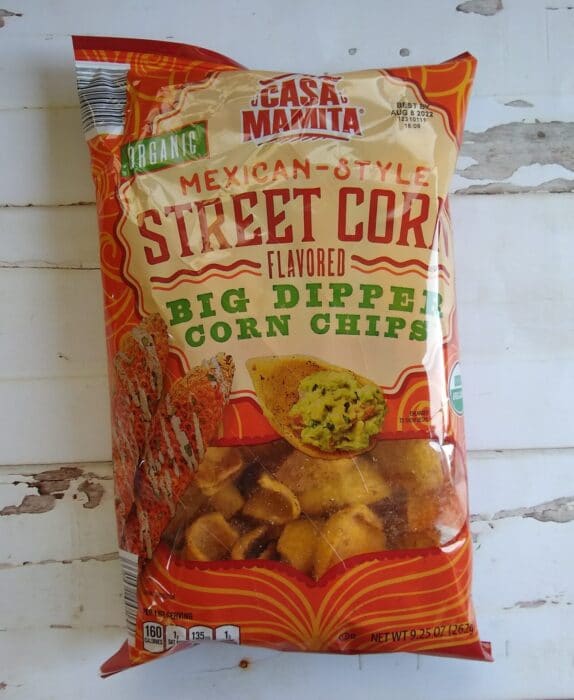 I found these stocked among the everyday Regular Buy chips and snacks at my local store, but I’m not sure if they’re a permanent new product or if they’re seasonal for the spring and summer months. In the past, they’ve been a limited-time Aldi Find. Time will tell whether these chips are here to stay.

Mexican street corn, also called elote, is a popular dish found in Mexico and parts of the U.S. It consists of corn that is cooked (often grilled) on the cob and slathered with a mixture of mayonnaise, cilantro, chili powder, cotija cheese, lime juice, or other seasonings. It’s traditionally served on the cob, but you might also find street corn cut off the cob and served in a cup or bowl. These corn chips from Aldi seek to capture the essence of this favorite dish.

The chips are certified organic by Quality Assurance International.

If you’re looking out for allergens, these contain milk. 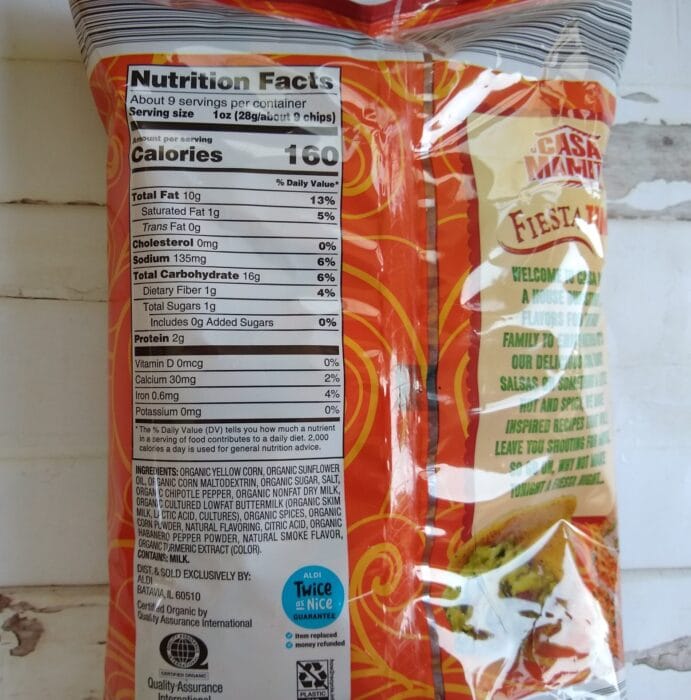 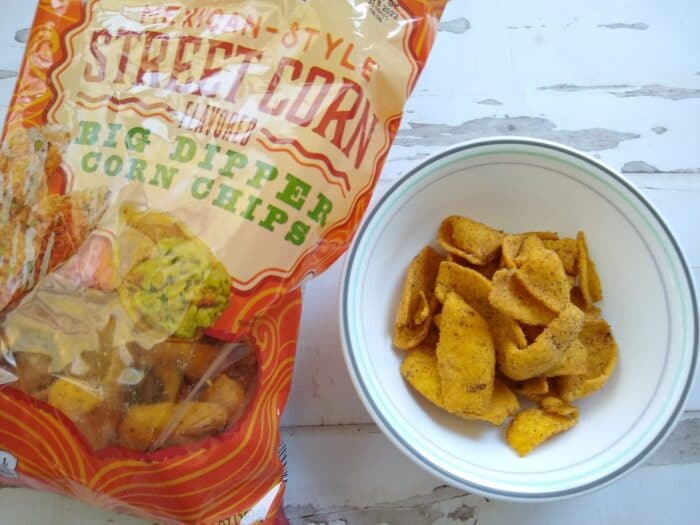 While they may not be good for you in terms of calories, fat, and sodium, these dippers are a fun occasional treat. They’re basically Fritos Scoops but with a stronger corn flavor and a generous dusting of spices with slight notes of cream or buttermilk, and they do have some kick. I don’t think they’re too spicy, but I do like to keep a drink nearby when snacking on these. They have so much seasoning that they taste good on their own, or you can dip them in guacamole or some of the other dips Aldi stocks, such as Happy Farms Salsa Con Queso, Park Street Deli Mexicali Dip, or Park Street Deli Street Corn Dip.

Casa Mamita Mexican-Style Street Corn Flavored Big Dipper Corn Chips are a Mexican-inspired take on regular Fritos Scoops-style dipper chips. They imitate the popular Mexican dish, street corn or elote. These have good corn and chile flavor and are a little on the spicy side. They’re good to eat on their own or paired with a bowl of guacamole for dipping.