Aldi Stores are Packed with Non-Food Aldi Finds. Here’s Why. 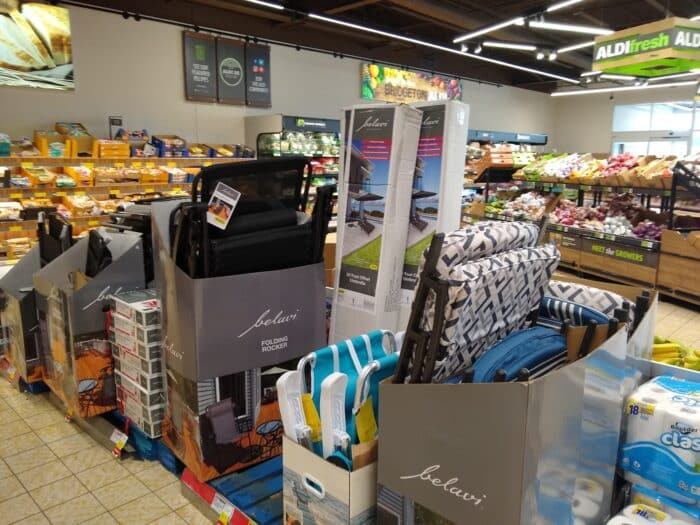 The produce and baked goods section at one of our local Aldi stores … filled with non-food Aldi Finds such as folding chairs and patio umbrellas.

Many retailers have a problem on their hands these days: too much inventory. Big box stores such as Target and Walmart, along with retailers such such as Gap and American Eagle Outfitters, reported in their most recent earnings calls that they have a glut of merchandise. Looking around at Aldi stores in our area, it seems the German grocer is dealing with the same challenge.

Walk into just about any Aldi store and you’re likely to spot the same overload of inventory that other retailers are struggling with. Most of the Aldi stores in our metropolitan area are jam-packed with rotating weekly specials of limited-time Aldi Finds. We also noticed the same trend when we popped into several Aldi stores while vacationing last month in another state.

For a few months now, all the goodies in the middle aisle have been spilling out into any available space in stores: endcaps, open areas near the front doors, empty space near the back store room doors, and wherever employees can find room to put everything. As a result, patio furniture, swimming pools, vacuum cleaners, and all of the goods that seemed so hard to find during the height of the pandemic are now showing up in bulk at stores everywhere.

Remember the sparse shelves at many Aldi stores during the summer of 2020? Remember when people were standing in lines outside Aldi stores before they opened in the mornings in hopes of scoring one of a limited number of swimming pools? That’s not the case now. We happen to love non-food Aldi Finds and have had fun browsing the well-stocked aisles lately, but things certainly look different now compared to two years ago. 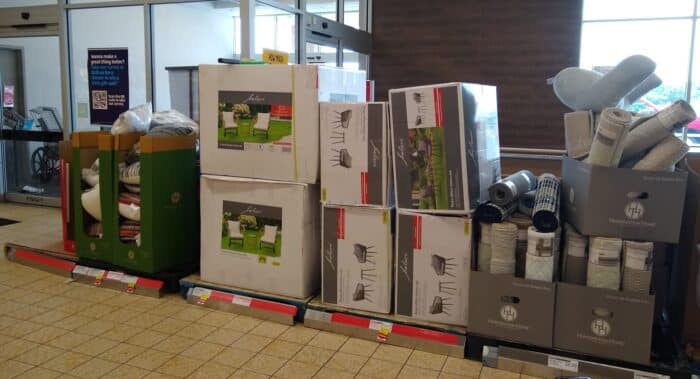 Patio furniture and rugs stacked near the entrance at our local Aldi.

Why Do Stores Have Too Much Inventory?

We initially chalked up the current robust Aldi stock to pent-up supply chain tangles that were perhaps finally starting to work themselves out. That is one reason why stores are full right now, although supply chain problems remain a big issue that hasn’t fully resolved. Still, it’s the most common explanation we’ve heard for why fall and winter clothing show up at Aldi in July, or pool floats in the fall.

However, while shipping delays and temporary product shortages have certainly plagued Aldi and most other retailers during the past couple of years, they don’t fully explain all of the overstocked shelves at stores right now.

Another reason why stores are so packed — and it’s perhaps the biggest factor currently — is that people aren’t buying as many consumer goods now compared to earlier in the pandemic.

People are still spending a lot on products — more than they did prior to the pandemic. However, the frenzied pace of spending that we saw early on has slowed as most of the world has returned to something closer to pre-pandemic life.

To put this swing in consumer demand into perspective, consider the early months of the pandemic. The U.S. saw a frenzy of demand for home goods including kitchen appliances and cookware, exercise equipment, electronics, patio furniture, home office furniture, and leisure wear. These were all things that people could enjoy or use while cocooned in their homes, potentially working from home, doing school at home, and seeking entertainment at home, not to mention cooking more meals at home. People wanted supplies for cooking, and they wanted to create functional home offices and spaces where their children could participate in virtual learning. And they wanted comfortable clothing. 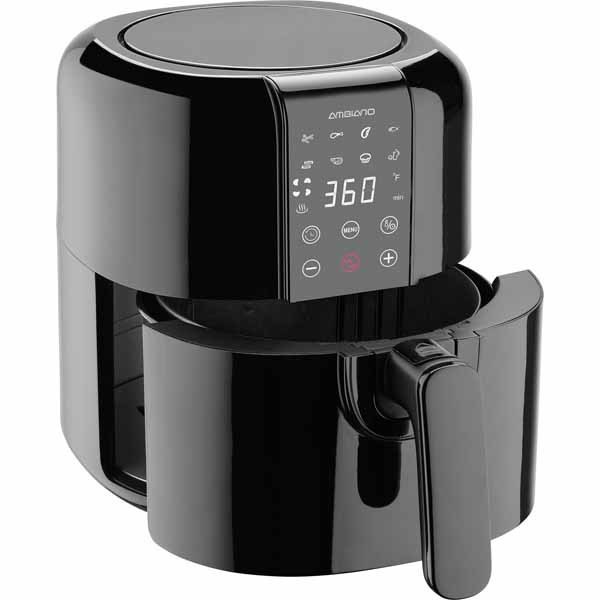 Air fryers like this one from Aldi were all the rage during the height of the pandemic when people were cooking at home more.

Now, more than two years later, many Americans are back to traveling and dining out. People are returning to the office and generally getting back to lives that resemble something more like what we experienced prior to March of 2020. In other words, people aren’t buying as many physical products as they were two years ago. Instead, they’re spending on things such as travel and experiences, restaurant food, and even different types of clothing including business attire or formal wear for special events. 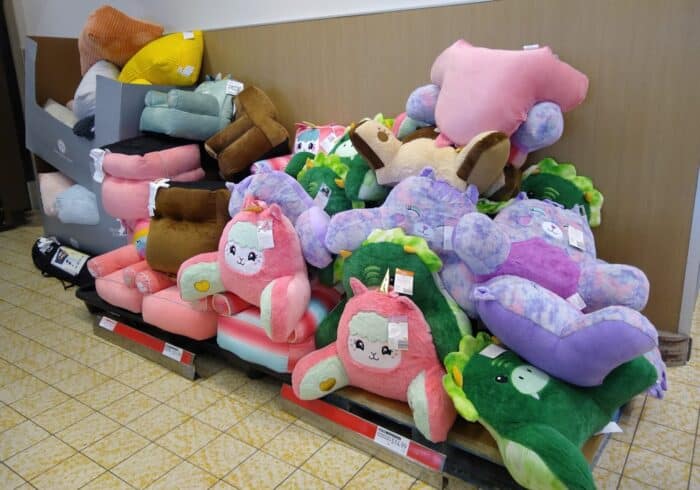 Kids’ armchairs and character backrests were all the rage during the height of the pandemic when bedroom makeovers were a thing. (We know, because we bought one two summers ago.) Now, they’re piled high outside the back storeroom at one of our local Aldi stores.

Retailers Have Struggled to Keep Pace With Changing Demand

Retailers and manufacturers have experienced whiplash when it comes to consumer demand during the past two and a half years. In March of 2020, stores couldn’t keep enough products on the shelves as people sought to stock up on everything from food to toiletries (including toilet paper) to home goods. Retailers adjusted and finally obtained enough products to generally meet demand, and now that demand has dropped and switched to other things.

Forbes reports that many of the big chain stores should have known better or seen this coming. In hindsight, it seems fairly predictable that after people spent so long staying at home, there would be pent-up demand for services, entertainment, travel, vacationing, and dining out. But if we’ve learned anything during the past few years, it’s that life is unpredictable.

So where does this leave retailers now? And what’s in store for consumers? 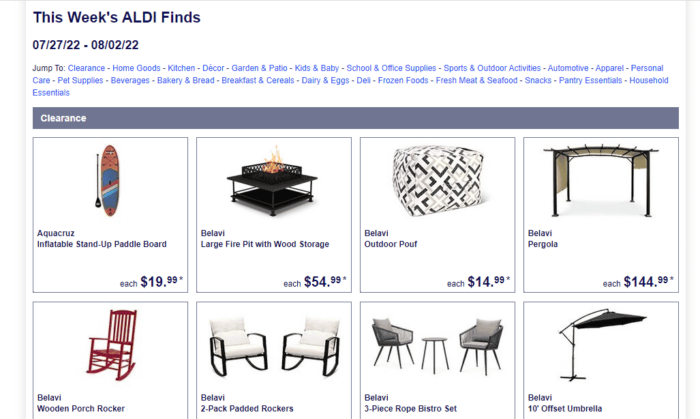 A recent screenshot of the “This Week’s ALDI Finds” tab on the Aldi website. Note the clearance items listed at the top.

Aldi seems to be attempting to deal with its overstock issues by putting merchandise on clearance. When we recently clicked on the “This Week’s ALDI FINDS” tab on the official Aldi website, the top of the page featured clearance items from throughout the summer that are marked down by as much as 75% in some cases, with deals available “only in stores” and presumably not via Instacart. Some of these deals are very hot, which means you’re probably lucky if you can actually find them in your local store, because Aldi does not offer online ordering for products not in stock at your store.

While you may or may not find those specific deals from the website at your local Aldi, when we’ve roamed our local store aisles, we’ve seen plenty of low prices on other big-ticket items, including large patio furniture sets, outdoor sectionals, fire pits, ellipticals, and treadmills. It’s not just expensive items that are going on sale either. We recently purchased a trellis that was reduced from $12.99 to $3.29. Keep in mind that — other than the specific items listed as being on summer clearance on the Aldi website — Aldi seems to leave most other markdowns up to a store manager’s discretion, so your mileage may vary depending on where you shop and what’s in stock at your local store.

We’ve also seen Aldi offer steep discounts on incoming weekly specials almost as soon as they hit the selling floor, so it’s not just products that have been sitting around for a while in stores that are going on clearance. For instance, a large patio egg chair with an initial price of $450 was discounted to $300 as soon as it arrived at Aldi, and based on comments from readers, the price has only continued to drop. Again, discounts like this are often up to individual store managers, so prices may vary based on the location. 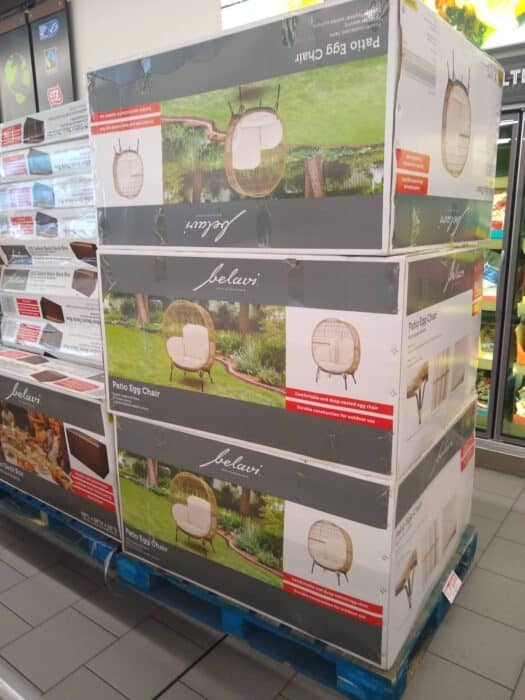 The Belavi Patio Egg Chair made its Aldi debut this summer, and one of our local stores discounted it almost as soon as it hit the selling floor. 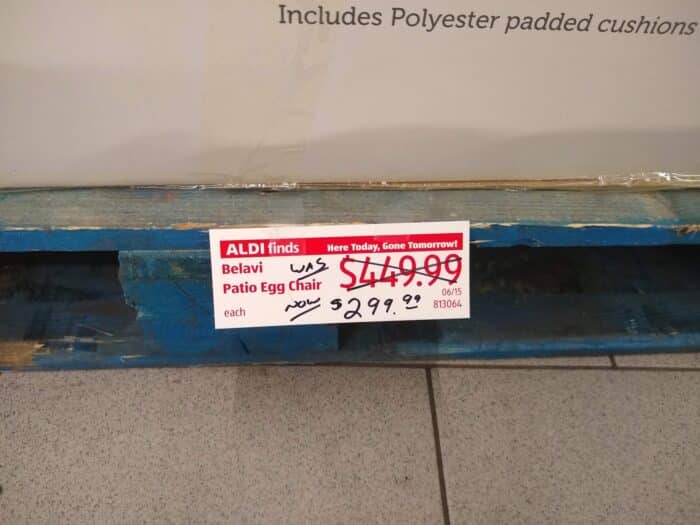 The Belavi Patio Egg Chair, with $150 slashed off the original price right at launch.

Aldi is not alone in slashing prices to clear space on the selling floor. NBC News reports that Target, Walmart, and Macy’s, among other retailers, are also cutting prices on goods already in stores. This means big deals for shoppers everywhere, and losses or low profit margins for retailers as they work to rebalance their inventory.

Some of these other retailers are even going a step further and offloading goods while they’re still in a warehouse, selling them to distributors for off-price chains such as TJ Maxx, Marshalls, Ross, and Burlington that sell discounted and overstocked merchandise. They have determined that it’s better to take the loss of some of these products so they can make room in stores for other new shipments of goods.

We don’t expect Aldi to do this, though. Instead, they’re likely to continue delivering advertised goods to Aldi stores and dramatically cutting prices as necessary. 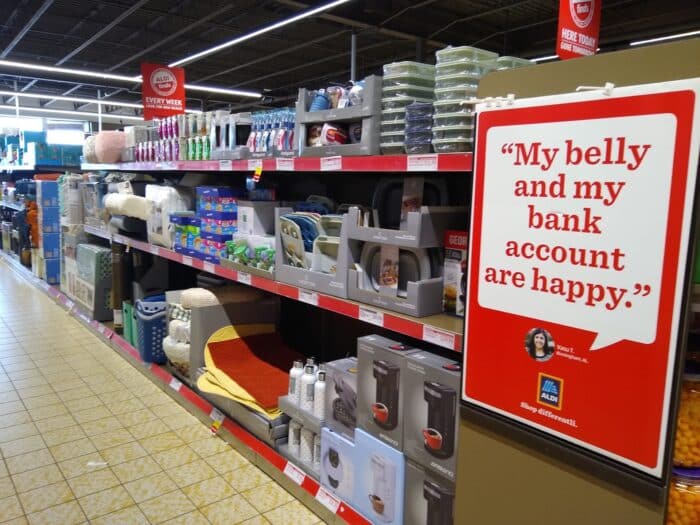 Part of the middle aisle at our local store. Lots of deals to be found here.

So, it’s not just your imagination. Stores everywhere, including Aldi, have too much inventory on their hands right now. Don’t just chalk it up to delayed shipments that are starting to come in, though; this overstock issue is also due to the fact that consumers have changed their shopping habits and preferences. What was popular two years ago — air fryers, home office setups, comfy clothing, electronic entertainment — is now less in demand as people seek out experiences such as travel, outings, restaurant dining, live entertainment, and gatherings with family and friends.

This means potentially big discounts for consumers as retail chains all over the U.S. try to offload their excess goods. We’ve certainly seen that play out at Aldi, where certain big-ticket items are being discounted this summer, often with huge savings for customers. Just keep in mind that sale prices may vary depending on your location.

Some retailers are hopeful that things will balance out by the end of 2022, but as we’ve learned during the last few years, it can be difficult to guess at what’s to come. In the meantime, we’re enjoying all the good deals.