When you’re spending extended time outdoors, it’s important to protect your skin from the sun’s rays. Besides wearing sunscreen, you might wear a brimmed hat or sit under an umbrella, or you might wear a rash guard if you’re swimming.

But sometimes sunburns happen despite your best attempts, especially if you’re outdoors during the hours of the day when the sun is most intense. If you get sunburned, there are after-sun products you can purchase to help moisturize your skin and potentially alleviate pain. This year, Aldi introduced its own after-sun gel under its Lacura private label. The Aldi Lacura label encompasses a variety of personal care products including shampoo and conditioner, face wash, body wash, razors, and day and night cream. 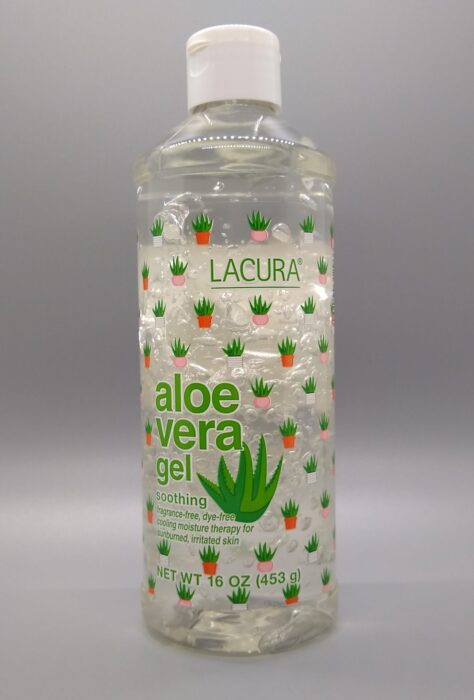 This is an Aldi Find, which means Aldi stores only get one shipment, and after that sells out, it’s gone, unless Aldi decides to bring it back at some point. Aldi does not offer online ordering for products that aren’t in stock at your local store.

This is advertised as fragrance-free, dye-free cooling moisture therapy for sunburned, irritated skin. It claims to be non-oily and to absorb quickly. This product was not tested on animals.

To use, apply generously on the body and face as needed. Reapply as often as desired.

This comes in an attractive bottle with small potted aloe plants printed all over it. The gel is clear with little air bubbles spread throughout it, and it looks like it would be refreshing to slather on sunburned skin. The gel goes on somewhat thick but easily spreads and absorbs into the skin when it’s rubbed, and it has a nice mild initial cooling effect. Keep in mind that this does not contain menthol like some other after-sun or sunburn-care products, so it’s not going to numb sunburned skin.

Overall, this looks like a promising product to treat sunburned skin. I’ll update this post accordingly as we use this gel throughout the summer swimming season.

Lacura Aloe Vera Gel features aloe as the primary ingredient. In terms of ingredients, it’s comparable but not identical to some other sunburn-relief gel products on the market, including Banana Boat and Fruit of the Earth. It’s unscented and was not tested on animals, and it goes on smoothly and absorbs easily. It’s a small thing, but we also like the little images of potted aloe plants on the bottle. We’re looking forward to using this through the summer months.