The freezer aisle at Trader Joe’s — which is a cousin to Aldi — can be a great place to sample various ethnic foods. They sell everything from Italian to Asian-American to Mexican. The Indian foods at Trader Joe’s are some of my favorites. I’ve tried a lot of Indian and Indian-inspired ready-to-heat frozen meals from TJ’s, including chicken tikka masala, vegan tikka masala, channa masala, butter chicken, paneer tikka masala, and shrimp tikka masala.

In my quest to continue trying all of the Indian food at Trader Joe’s, I recently tried some vegetable biryani. Biryani is a rice dish made with spices and often with some kind of meat (the TJ’s version is vegan and contains vegetable dumplings), and sometimes it also contains eggs or potatoes. It’s popular in South Asia and in other countries including Iraq, Malaysia, and Thailand. Wikipedia states that it’s the most-ordered dish on Indian online food ordering and delivery services. 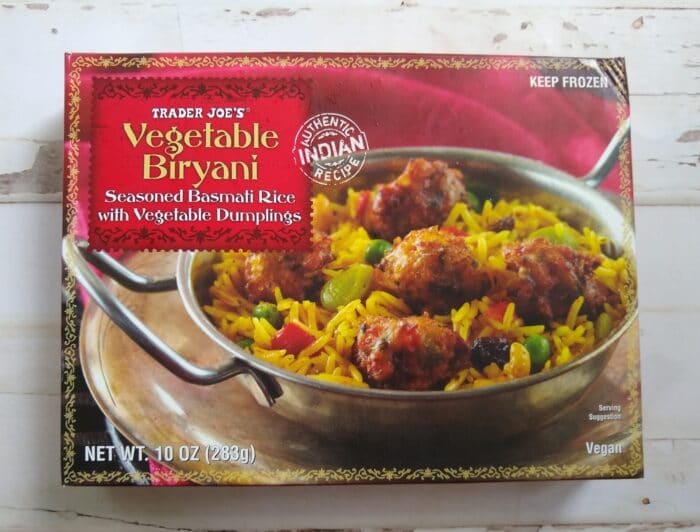 Trader Joe’s Vegetable Biryani cost $2.99 for a 10-ounce package at the time of publication. The package describes this as “seasoned basmati rice with vegetable dumplings.” You’ll find it in the freezer aisle at Trader Joe’s.

If you’re looking out for allergens, this contains wheat and cashews. 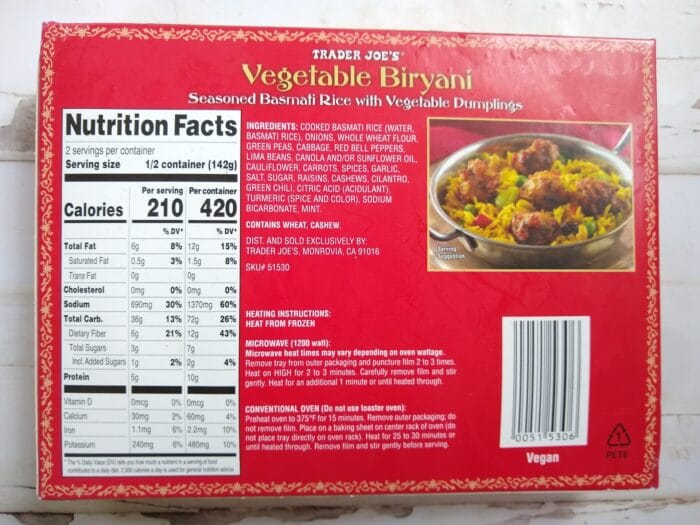 The package has directions for heating this in a microwave or in a conventional oven.

To microwave, remove the tray from the outer packaging and puncture the film 2-3 times. Heat on high for 2-3 minutes. Carefully remove the film and stir gently. Heat for an additional 1 minute or until heated through. 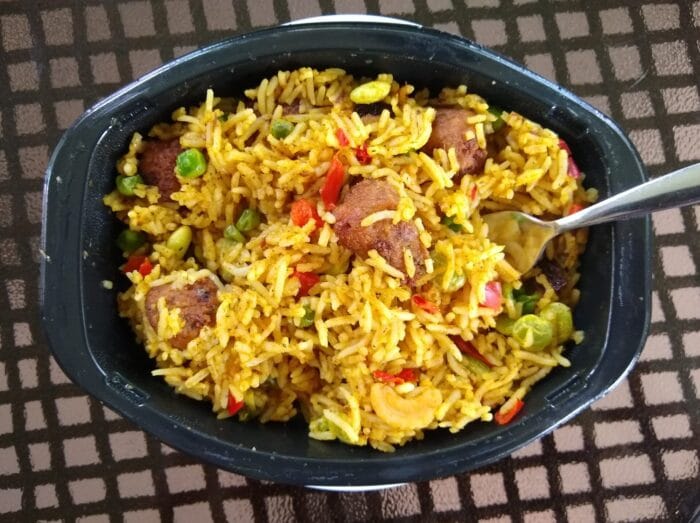 I prepared this in the microwave for a quick and easy workday lunch. The rice is fragrant and well seasoned. While this is primarily a rice dish with some small veggie pieces including peas, diced peppers, and lima beans, it also contained a good number of small vegetable dumplings. The vegetable dumplings had a light outer breading and didn’t taste like any specific vegetables. They added a bready texture that nicely complemented the rice. This contains cashews, but I only found one in mine. I also didn’t realize it contained raisins until I looked more closely at the ingredients list afterward, so if you aren’t a fan of raisins, you’ll probably be okay with this meal. Overall, I liked this meal and would buy it again.

Trader Joe’s Vegetable Biryani features seasoned basmati rice with vegetable dumplings. The dumplings have a bread-like texture that complements the rice, and there are plenty of small vegetables mixed in with the rice. I thought this was good for a frozen meal, and it’s a nice option when you need a quick hot lunch or dinner.