In 1944, inventor William L. Maxson decided to tackle the problem of military meals. Maxson, a former Navy midshipman himself, observed that Navy personnel had few culinary options when they were on transports flying across the Atlantic. In an era when microwaves were not yet a reality, he conceived of a special kind of oven that could rapidly heat frozen meals midflight. His oven’s secret? A fan that would circulate the heat in the oven, pushing the layer of cool air aside from cold or frozen food.

The convection oven was born.

In 2010, Philips tweaked the convection oven idea to create the air fryer, a device that could simulate cooking in oil without having to use the oil. Today, air fryers are a popular appliance, with a number of brands producing them.

In recent years, Aldi has sold various air fryers under its Ambiano label, including a compact model, a 2.7-quart version, a combo air fryer and programmable pressure cooker, and a 6-quart model that Aldi has sometimes called an XL air fryer.

We’ve previously tested the 2.7-quart model, so we decided to try out the 6-quart one. 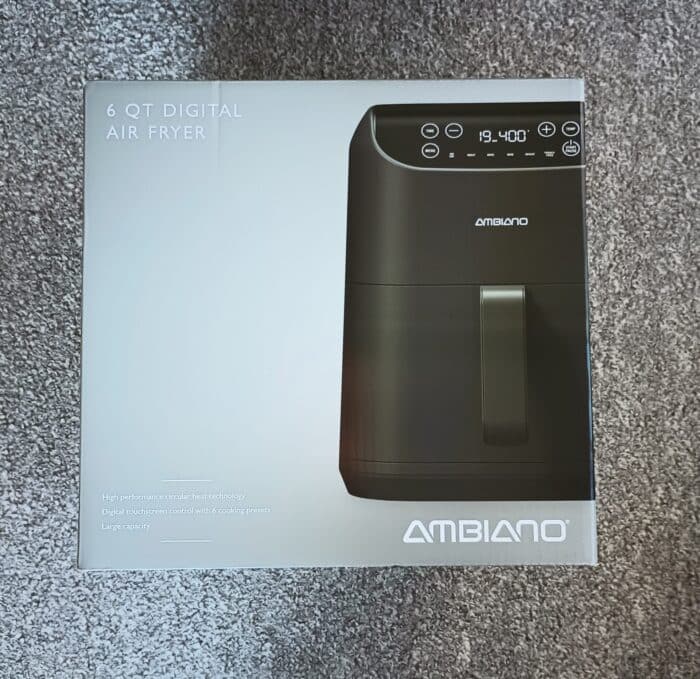 The Ambiano 6 Quart Digital Air Fryer (Product Code: 707781) is an Aldi Find, which means each store gets a single shipment. Once that shipment is sold out, you can’t get any more of them until Aldi brings them back, whenever that might be. Aldi doesn’t ship its products online, so if you can’t find it in stores, you’re out of luck.

At the time of this post, this model cost $59.99. A brief look on Amazon shows 6-quart air fryers running anywhere from $46.99 into the $130 range. So the Aldi model is on the lower end of prices, but it isn’t necessarily the cheapest I could find.

According to Aldi, this 6-quart model’s features include:

The air fryer comes with a 3-year warranty, serviced by Sensio, an appliance maker that is now known as Made By Gather and has serviced other Aldi products. 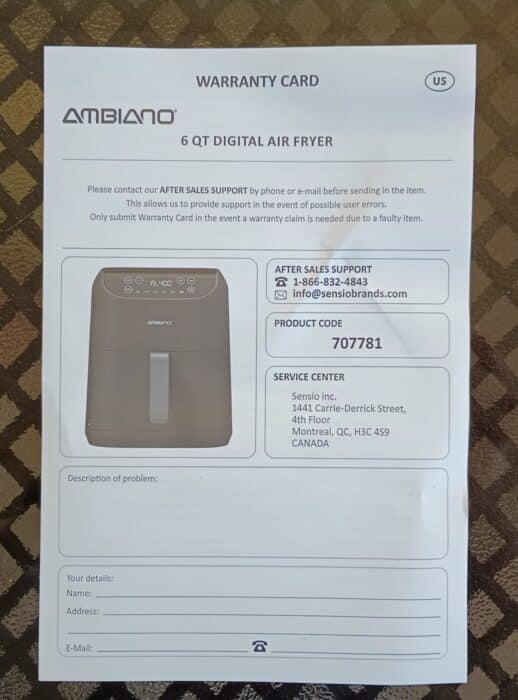 The box contains the following: 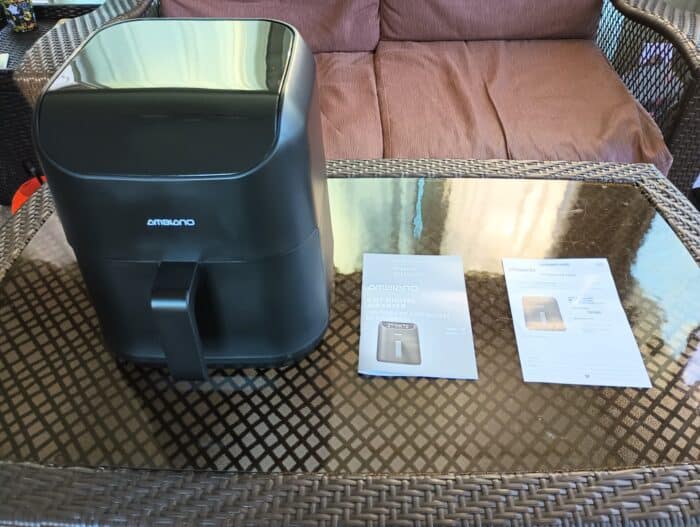 The crisping tray sits on the bottom of the frying basket and is held against the sides by soft tabs. The tray can be removed and washed separately from the basket. 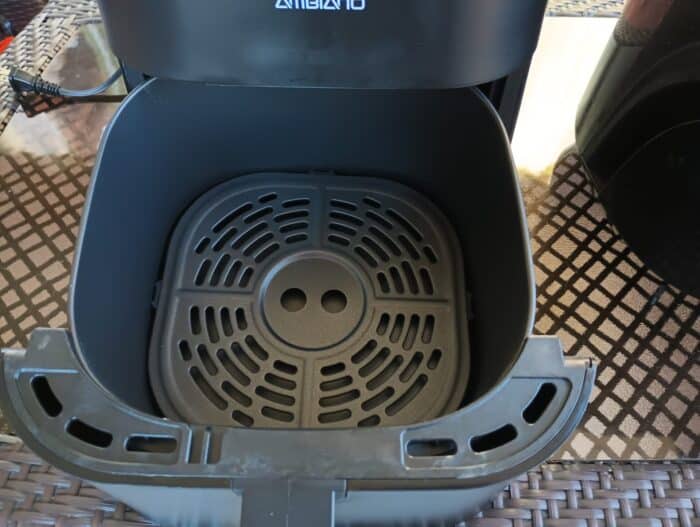 The basket with the crisping tray installed.

As with any appliance, it’s a good idea to read the manual carefully. This one has important instructions on what to do before using it, as well as what not to do. You should, for example, never submerge the main base in water, and you should clean the frying basket and crisping tray before using. The manual also has some guidance on what temperatures to cook certain kinds of foods.

As you would expect, the Ambiano 6-quart model is bigger than the Ambiano 2.7-quart one. Most of that size difference plays out in width and depth, with the two being a little more similar in height. 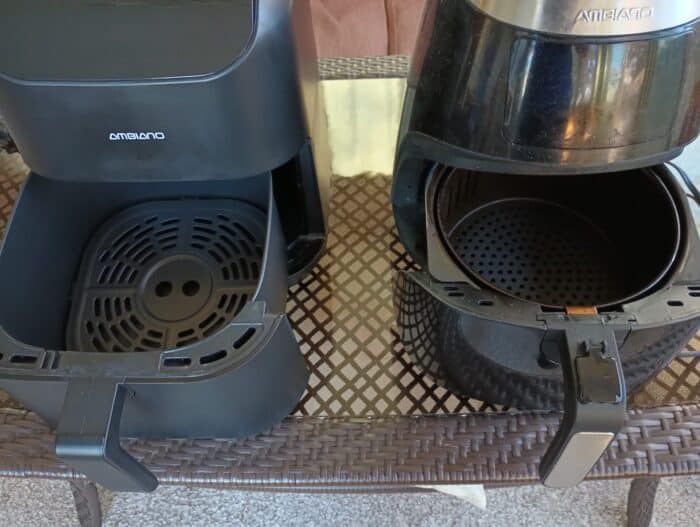 Like its smaller sibling, the 6-quart air fryer uses a touch screen interface at the top of the device. You use the menu button to cycle through various preset options. Use the time and temp buttons to select the cook time or cook temperature, the + and – buttons to make adjustments to the aforementioned time or temperature, and the power button to start and stop the fryer. It’s not too hard once you get the hang of it. 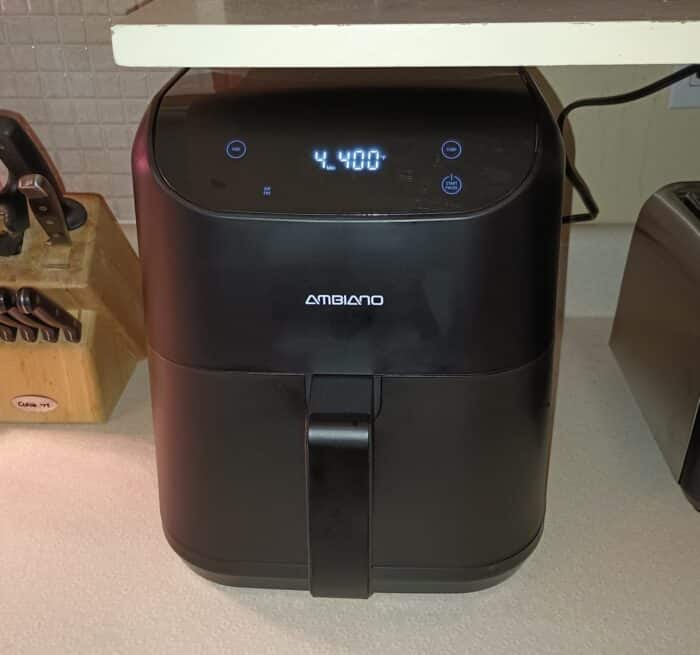 I did find that the touch screen could be a little finicky if I did a lot with it in a short time, such as pressing a button rapidly and then pressing another button rapidly as well. The software, I suspect, has trouble keeping up sometimes. To be fair, in more real-world use where I’m just presetting, I didn’t have those same problems. That’s not a problem I had with the 2.7-quart fryer, though.

Where the 6-quart shines is in its spaciousness. The basket is big enough for putting in a lot of food. The Aldi information touts it as being recommended for six to eight people, but I can say that even for a family of four, this has a lot of merit. We cooked several things in this fryer and found the additional space was very helpful in cooking lots of food and cooking it fast. One drawback of a smaller fryer, for instance, is that when it gets full it takes a lot longer to get everything cooked and to get it cooked evenly, and some things that aren’t in good contact with the bottom of the frying tray don’t get crisp. (We’re looking at you, “red bag” chicken.) This bigger fryer will cook that same quantity of food in a faster time because it’s got more room for airflow.

We cooked a variety of foods in the fryer, including small whole seasoned potatoes and hash brown patties, and they call came out the way we’d hoped. Food cooked up fast, crisp, and even, and the tray did a good job of holding it all. It just does the job. 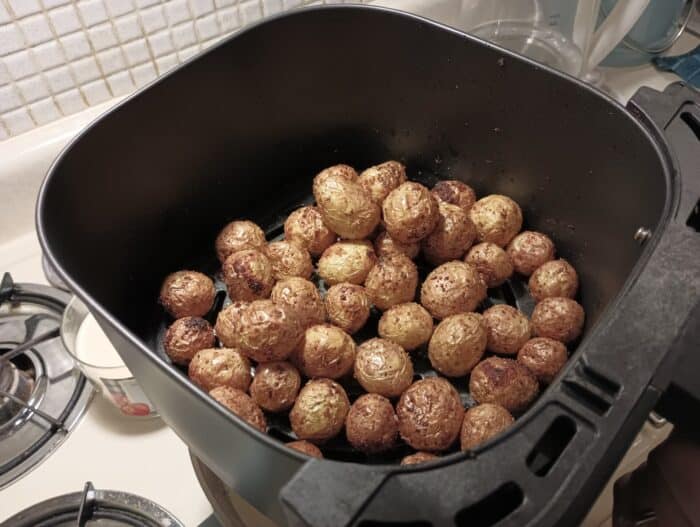 The Ambiano 6-Quart Air Fryer is a large, versatile appliance for heating up things fast. In our tests, foods cooked up crisp and tasty, and cleanup afterward wasn’t hard thanks to a removable basket and separate crisping tray. I found the touchscreen to be a little fickle if I hit too many buttons too fast, but for the most part it works the way I would expect.

So is it worth getting? There’s a lot of competition in this space, and while the price is on the lower end of 6-quart fryers, it’s not the cheapest out there. It’s a pretty good price point, though, and it is backed by a 3-year warranty. For my part, I intend to use this to replace my smaller Ambiano Air Fryer. It will be interesting to see how it holds up over time.