If I were to list two of the most popular innovations in kitchen appliances during the last ten years, I would have to put programmable pressure cookers and air fryers at the top of the list. Pressure cookers have been around for a long time, but the launch of the Instant Pot in 2010 revolutionized cooking. Today, multifunction pressure cookers have replaced a host of other cooking appliances, thanks to their ability to do everything from slow cook to make rice.

Air fryers have been a big development, too. Restaurants and consumers have been using deep fryers for decades, but those require lots of oil, which introduces both added fat and added mess. In the same year that the Instant Pot was released, Dutch company Phillips unveiled the Airfryer, which adapted existing convection oven technology to simulate what a deep fryer could do without the oil. Today, air fryer has become a generic term for these specialized convection ovens.

As popular as the two appliances are, I suppose it was only a matter of time before companies started trying to see if they could consolidate them into one single appliance. Aldi, which has sold its share of both programmable pressure cookers and air fryers, is stocking just such a combination product. 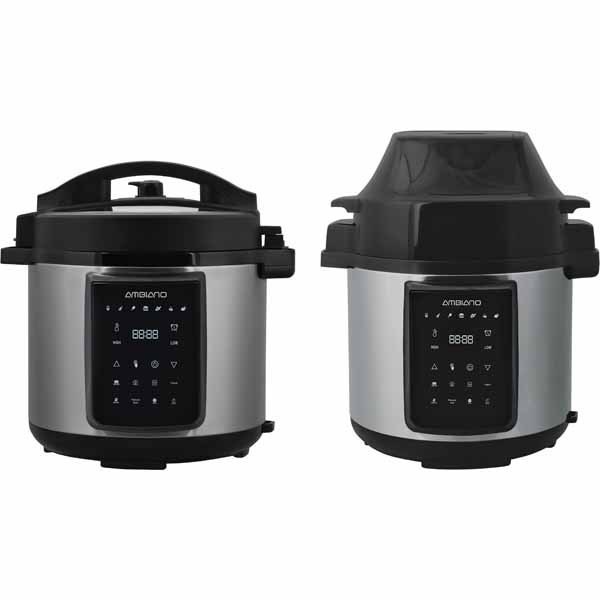 The official Aldi promo photo. Note that the lid can be changed out to switch between pressure cooker (left) and air fryer (right).

The Ambiano Pressure Cooker and Air Fryer Combo (Product Code: 707294) is an Aldi Find, which means it’s only in stores for a limited time. Each store gets a single shipment, and once that’s sold out, you won’t be able to get the appliance until it comes back to stores, whenever that might be. Aldi doesn’t ship products online, so if you can’t find it in stores, you’re out of luck.

At the time of this post, the pressure cooker / air fryer costs $99.99. That’s lower than most other combo products I can find online.

As best as I can tell, the Ambiano model looks identical to a Thomson Air Fryer / Pressure Cooker, which is sold on Amazon and elsewhere. The design, including the button layout, appears the same. The Thomson model currently averages 4.5 out of 5 stars on Amazon based on 240 ratings, with 73% of users giving it 5 stars.

Aldi doesn’t specify what those accessories are.

We haven’t tested this combo product out, so we don’t know how easy it is to use, how effective it is at both pressure cooking and air frying, or how long it lasts. We’ve created this open thread for users to share their thoughts.

Do you have experience with this combination product? Let us know in the comments.