EDITOR’S NOTE: View our update after more than a year of use toward the bottom of this post.

Aldi can be a great place to buy stuff to outfit your bathroom, from bath towels to shower caddies and organizer trays, and even Squatty Potties, razors, and toothbrushes.

When the weekly ad indicated Aldi would be selling shower curtain sets, I decided it was time to replace the old Kmart shower curtain that’s been hanging in my main bathroom for more than a decade.

The Huntington Home 14 Piece Sower Curtain and Hook Set cost $9.99 at the time of publication. That seems like a good deal considering that you’d often pay at least that much for a shower curtain alone at many retailers, including Amazon.

This is an Aldi Find (Special Buy), which means it’s only in stores for a short time. Aldi does not offer online ordering for its specials, so once this sells out at local stores, it’s gone, at least until the next time Aldi decides to sell shower curtains.

The set came in several designs, including floral prints and stripes. I purchased a paisley set. All of the current sets include one shower curtain, one frosted liner, and 12 rollerball hooks. Both the curtain and the liner measure 72 inches by 72 inches. This was made in China and is certified to be free of harmful levels of more than 300 substances.

The curtain is 100% polyester and is machine washable in cold water on the gentle cycle. Use only non-chlorine bleach as needed. Tumble dry on low heat. Iron on the lowest setting on the reverse side if needed.

The frosted liner can be cleaned using a damp cloth and mild soap. 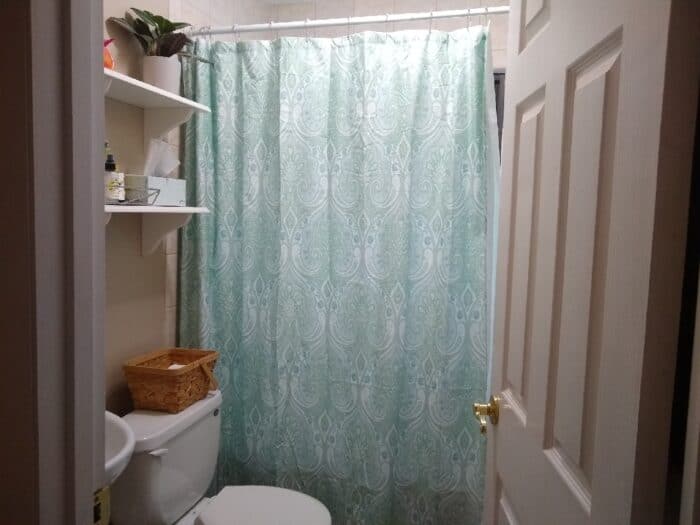 The curtain set in my bathroom.

This set was easy to hang in my shower. The curtain and liner are not very thick, but that makes them ideal for my small bathroom where a thicker or more elaborate curtain would stick out too close to the toilet. The thickness is about what I’d expect for such an inexpensive set. It looks nice and brightens up my bathroom. 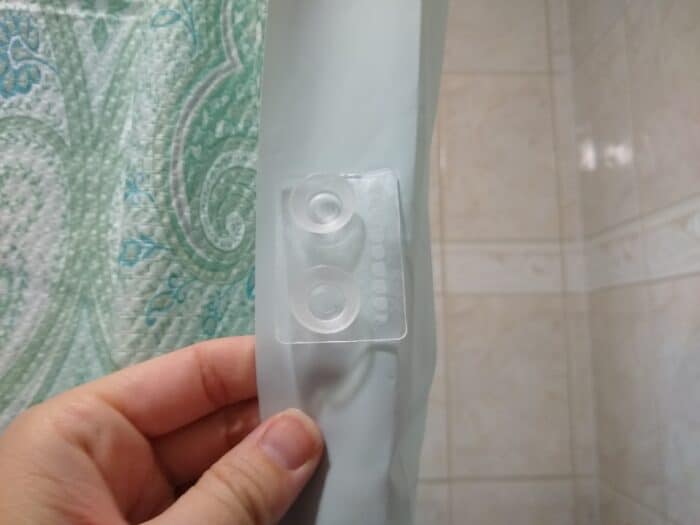 Suction cups on the liner.

Plus, in addition to small magnets/weights on the liner’s lower corners to help keep it in place, the liner also has small suction cups you can stick to the wall. 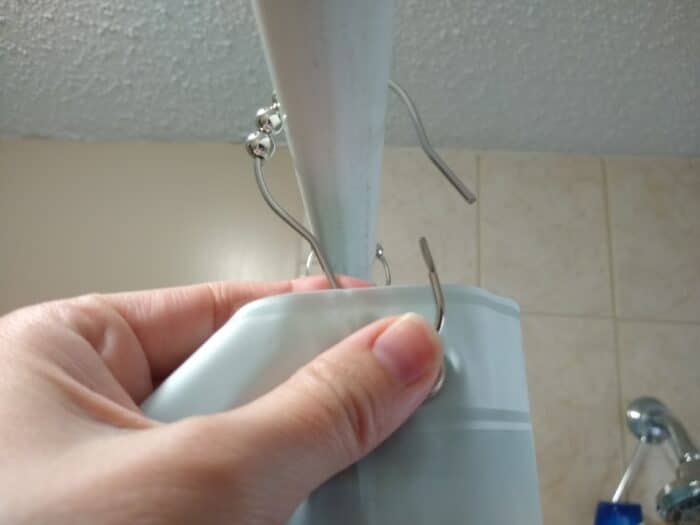 A closer look at one of the hooks.

The only thing that remains to be seen is how well the liner resists mildew. Stay tuned.

UPDATE (8/7/2022) — This curtain set held up well for more than a year, and the liner did a pretty good job of resisting mildew. It was a good set for the price, although the liner started to tear in the spring of 2022. I kept the shower curtain, which still looks great, and replaced the liner with one from Dollar General.

The Huntington Home 14 Piece Sower Curtain and Hook Set is a good set for the price. If you are looking to give your bathroom a facelift, this is a decent option.