When November rolls around, turkeys and hams start appearing in the freezer cases where Aldi stocks its limited-time specials. This is all in time for holiday dinners, and you have several choices when it comes to your big entrée, including spiral sliced hams, hickory smoked honey spiral sliced hams, uncured spiral hams, whole turkeys, bone-in turkey breasts, and more. 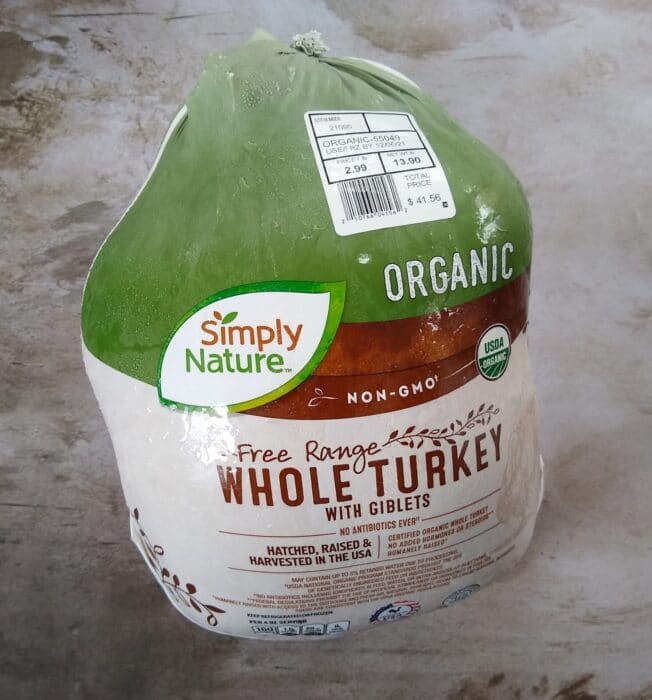 The Aldi Simply Nature turkeys are only in stores for a short time, either as an Aldi Find or as a seasonal item during the holidays. If they aren’t in stock at your local Aldi store, you can’t order them online.

The back of the package states the turkey was produced by Larry Schultz Organic Farm in Owatonna, Minnesota 55060. It was certified organic by Global Organic Alliance Inc. in Bellefontaine, Ohio. This turkey is non-GMO, contains giblets, was given no antibiotics ever, and claims to have been humanely raised with access to the outdoors and fresh air, natural sunlight, and room to exhibit natural behaviors. The turkey is a product of the U.S., having been hatched, raised, and harvested here.

The turkey may contain up to 5% water due to processing. Otherwise, the only ingredient in this is organic whole turkey.

The turkey I purchased about a week before Thanksgiving had a use or freeze by date of December 6th. 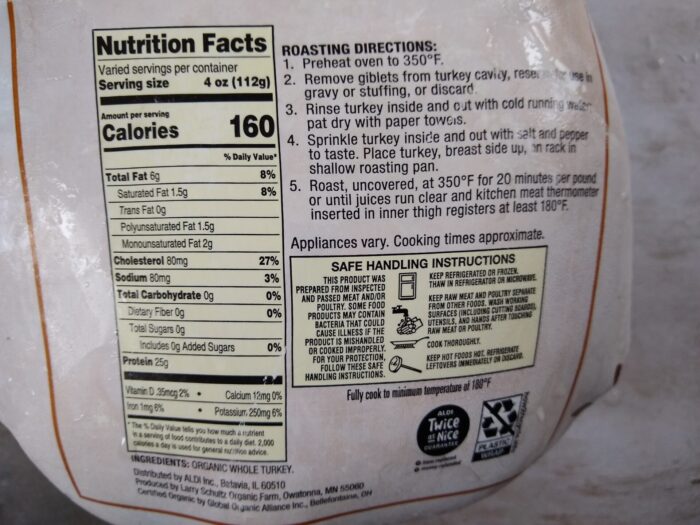 The back of the package has the following instructions for roasting the turkey. I’ve listed those instructions here, along with some important notes of my own.

For my 13.9-pound turkey, roasting for 20 minutes per pound meant roasting it for approximately 278 minutes, or 4 hours and 38 minutes. That sounded like a long time to me. It sounded especially long because the oven temperature is 350 degrees, rather than something lower like 325 (which is what Taste of Home recommends). Adding to my suspicion that the cook time was off was the fact that the other week I roasted a similarly sized Trader Joe’s turkey for three hours and 20 minutes. (Yes, we test a lot of turkeys around here during the holiday season. Thankfully, leftover turkey freezes well.)

I preheated my oven to 350 degrees and checked on the turkey after 2 hours and 20 minutes. At that point, the thermometer registered 180-190 degrees in the inner thigh, so the turkey was clearly done. I took the turkey out of the oven and let it rest and cool.

I did some additional turkey math and realized that ultimately, my turkey roasted for about 10 minutes per pound. That is on the lower end of recommended cooking times for commercially raised turkeys, and that’s far less time than the 20 minutes per pound that this turkey’s package directions gave. My best guess is that this cooked faster because it’s a free range turkey and not a traditional factory farm turkey. It’s common for free range poultry and beef to cook faster because it’s leaner than standard grocery store meat. Some places that sell pasture-raised turkeys recommend roasting them at 325 degrees for just 8-10 minutes per pound, and that was definitely more within the range of my experience with this free range turkey.

When my family sampled this turkey after it roasted, we thought the breast was a little on the dry side, probably because the turkey cooked much faster than the directions indicated, and as a result it probably should have been pulled from the oven slightly sooner. The skin was nicely browned and it wasn’t a bad turkey, but if I cooked this again I’d do it for less time and perhaps at 325 degrees instead of 350.

I wouldn’t be opposed to purchasing this turkey again because there is a lot to like about free range birds and the fact that the package states what specific farm the turkey came from. But the included cooking directions are problematic, from the fact that they tell you to rinse the turkey — an unnecessary step that potentially spreads bacteria around your kitchen — to the fact that you’ll seriously overcook your bird if you roast it for as long as they say to. Because this isn’t the cheapest turkey out there, you really don’t want to risk drying it out with an overly long cook time. The turkey itself seems good, but the entire set of preparation instructions simply needs to be rewritten or removed all together.

Simply Nature Organic Free Range Whole Turkeys are one of the more expensive turkeys Aldi sells during the holidays, but we appreciate that the package lists a specific farm where this turkey was raised, which is something you don’t see on most grocery store meats these days.

However, we took some issue with the package directions. The package directions recommend the outdated practice of rinsing the raw turkey prior to roasting, which we do not recommend because it doesn’t kill bacteria and instead spreads illness-causing bacteria around your kitchen. In addition, the package also says to roast the turkey for so long that you’re likely to overcook your bird. Rather than the recommended 350 degrees at 20 minutes per pound, you may want to try 325-350 degrees at something more like 8-10 minutes per pound.